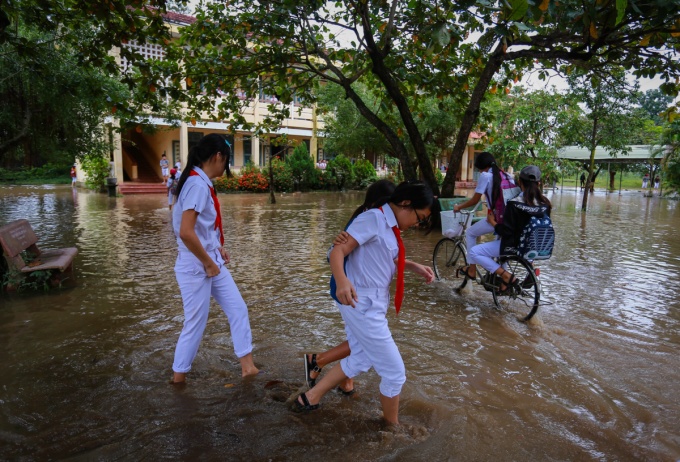 Experts are concerned that without proper protection, many children in Vietnam will give up school to help their families when disasters hit.

Natural disasters are becoming more frequent and severe in Vietnam, and their impacts reach down to the youngest and most vulnerable in society, experts said at a conference held in Hanoi on Tuesday, a day after the World Day Against Child Labor.

Vietnam, which is one of the five countries most vulnerable to climate change, was hit by 20 disasters last year, which included droughts, saltwater intrusion, typhoons and tropical depressions that were followed by severe floods.

The impacts were significant given the fact that 70 percent of Vietnamese people live in rural areas and more than 40 percent of the country’s workforce is employed by the agriculture sector.

Government data showed that 264 people were killed in disasters last year, while nearly VND40 trillion ($1.75 billion) of damage was caused, nearly five times that of 2015. Thousands of houses were destroyed, rice fields damaged and countless books washed away.

These disasters destroy livelihoods and "so many children have no choice but to give up school to work for their families’ survival,” Chang-Hee Lee, director of International Labour Organization Vietnam, said at the conference.

“Solutions should be directed at identifying particular issues and child labor,” he said.

Around 1.75 million children aged between five and 17 years old in Vietnam, or nearly 10 percent of the age group, are working heavy or unhealthy jobs, according to figures from the labor ministry.

Prime Minister Nguyen Xuan Phuc issued a national action plan for sustainable development last May which aims to end child labor in the country by 2025.

A total of 168 million children around the world are pressed into child labor. This year’s World Day Against Child Labor focused on the impacts of conflict and natural disasters on the issue.

A Human Rights Watch statement said about 250 million children live in areas affected by armed conflict, and another 70 million are affected by natural disasters, conditions that fuel child labor.

In Afghanistan, for example, at least a quarter of local children aged from five to 14 work to support their families – often for little or no pay. Around 60 percent of Syrian refugee families in Jordan also rely on money earned by children due to inadequate aid and dwindling family funds.