A Tale of Two Shrimpers: How will the Mekong Delta adapt to climate change? 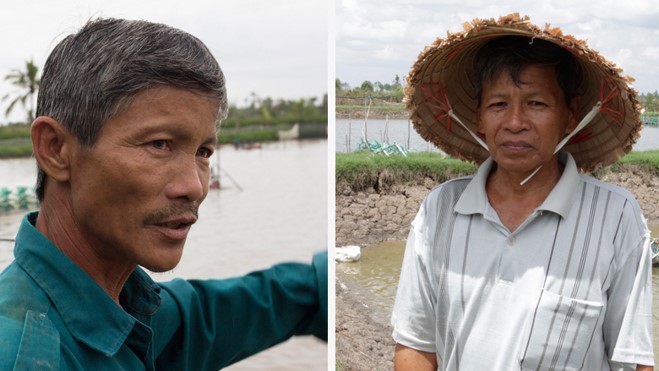 This year, Nguyen Van Khuyen (right), who owns 6 hectares of aquaculture ponds in Ca Mau Province in Vietnam, could not raise shrimp as usual due to a severe drought. Using a model shrimp farm, To Hoai Thuong (left), who has divided his farm in three ponds – one holding shrimp, another fish, the third freshwater - could harvest about 10 tons, in line with normal production. (Photo credit: Flore de Preneuf/World Bank)

Vietnam’s Mekong Delta is famous for its rice fields, shrimp ponds, embankments and canals. This fertile patchwork sustains the livelihoods of more than 17 million people. But climate change, water scarcity and pollution are fraying the fabric of economic life in the delta. New approaches to managing land and water in uncertain times are needed.

The vulnerability of the Mekong Delta came into focus this year when the area was hit by a historic drought. The extreme weather was combined with low Mekong river flows, coupled with development in upstream countries. Many farmers were left short of freshwater and scrambling for ways to adapt.

On a recent visit to Ca Mau province, at the very southern tip of Vietnam, agriculture experts described how rice had withered and shrimp and fish had died.

For Nguyen Van Khuyen, who owns 6 hectares of aquaculture ponds bordering a brackish canal in Tran Van Thoi district, the exceptionally long and hot dry season meant he could not raise shrimp as usual: “We tested the water and it was too salty, so we didn’t put in any shrimp. We lost 8 months of production,” he said.

When we met in early June, the rain had just returned. “We’re waiting for government assistance to buy new shrimp seeds,” said Nguyen, 65. Deprived of his main income, he has been unable to pay back money he borrowed from the bank to invest in shrimp farming. None of his sons are pursuing a future in farming. “As a teenager, I remember rain always fell in April,” said Nguyen. “Today it’s difficult to plan ahead.”

About an hour’s drive from there, on a model shrimp farm, technical know-how helped farmer To Hoai Thuong, 53, weather the drought. Since 2013, To’s farm has been divided in three ponds – one holding shrimp, another fish, the third freshwater. Stored freshwater helped to dilute the salinity in To’s shrimp pond, while fans churning the pond’s surface brought down the water’s temperature. He expects a harvest of about 10 tons, in line with normal production, despite the heat.

For To, the three pond model has proven not only more resilient, but also more sustainable and more profitable than the intensive model he followed in the past. Shrimp are less densely packed but more productive. Fish clean out bacteria and reduce the risk of shrimp-killing disease, and the rotation system limits the need to change and discharge contaminated water that can affect neighboring farms. “I built this temple to my grand-parents with shrimp money,” he said proudly, pointing to a grand structure next to his house. “There is room for the next generation too.”

The demonstration farm, supported by the Coastal Resources for Sustainable Development Project,  is part of a search for good practices that can set aquaculture on a more sustainable and climate-resilient path while ensuring higher profits for farmers. Vietnamese authorities, with support from partners including the World Bank, are rethinking rural development in the delta to sustain livelihoods and long-term growth in a challenging environment. 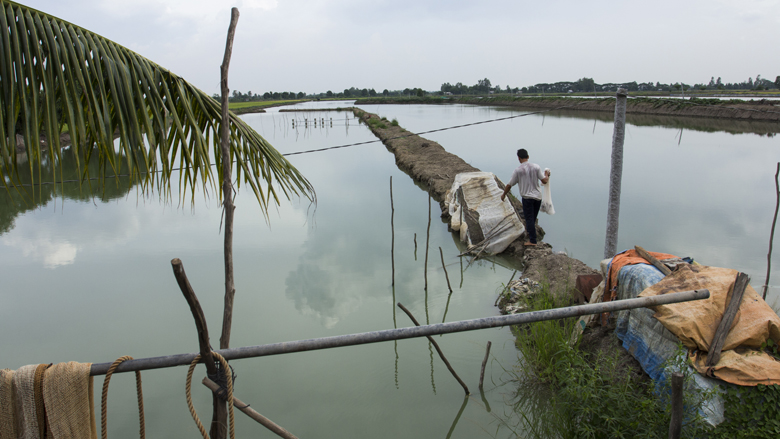 The Mekong Delta contributes to 50 percent of Vietnam’s rice production, 70 percent of its aquaculture and a third of its GDP, but productivity gains have stalled. In particular, there is a sense that the past 20 years’ strong focus on increasing rice production has reached environmental and economic limits. Rice quality is low and productivity is declining in areas increasingly affected by the intrusion of saltwater due to rising sea levels and subsiding land.

Salinity is also a problem for shrimp, which grow more slowly or die when salt levels are too high. Drainage of wetlands for agricultural expansion and extensive water control infrastructure designed to allow multiple rice crops have had negative impacts on the delta’s ecological connectivity, biodiversity -- and ultimately productivity -- by disrupting water flows that carry sediment and nutrients.

Authorities are grappling with how to make the best use of water for sustainable development at a time when the amount of water and its timing are becoming more erratic because of climatic and upstream factors they can’t control. Flooding in 2000 and 2011 was much higher than normal. In the last three years, flooding has been very minimal. “It’s totally changing production patterns. All we can do is continue testing different models to reduce risks and increase incomes for farmers,” said Lu Cam Khuong, deputy director of the Department of Agriculture and Rural Development in An Giang, a province in the upper delta where the Mekong River first enters Vietnam.

Lack of forecasting and reliable information is hampering current planning and management efforts. In the recent drought, farmers like Nguyen received no early warning that could have avoided losses.

The recently approved Mekong Delta Integrated Climate Resilience and Sustainable Livelihoods Project, backed by a $310 million IDA credit to Vietnam, will help upgrade the monitoring, analyzing and sharing of information at the level of the Mekong Delta to support decision-making under uncertainty. The multi-sector project will also help Planning, Agriculture and Environment authorities come together to identify climate-resilient investments, integrate climate change in local planning, and better coordinate their actions. Building on a Mekong Delta Plan developed in 2013 with support from The Netherlands, the project will also invest in measures that have proven successful to manage floods, adapt to salinity and protect coastal areas in different vulnerable sub-regions within the delta.