Bringing mangroves back as defenders of climate change impacts 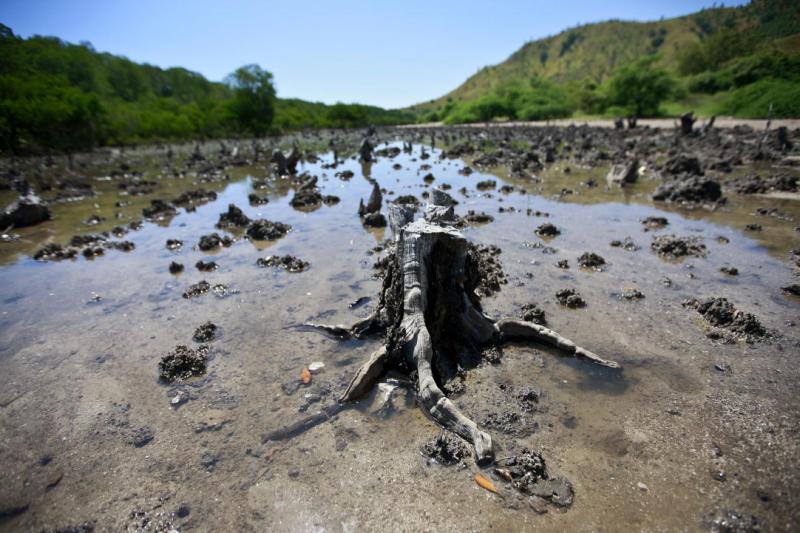 Some of the most effective adaptation solutions are sometimes found in nature – take, for example, mangrove forests that live along tropical shorelines in parts of Asia and the Pacific. They grow where land and sea meet and they are the first line of defense against ocean-borne storms and hurricanes heading inland.

“Mangroves are a remarkable group of tough, salt-tolerant trees and shrubs that not only survive, but thrive in shallow seawaters,” said Raimundo Mau, who is a Director-General at Timor-Leste’s Ministry of Agriculture and Fisheries.

By reducing surface waves with their raised roots and storing floodwaters in their wetlands and marshes, mangroves protect coastal Timorese communities against rising sea levels as well as storm surges, he explained. Mangroves also provide food, shelter, and livelihoods for the people living in these communities.

In recent years, however, mangrove forests across Timor-Leste have dramatically declined. According to government statistics, the coverage of mangrove areas in the country is estimated to have dropped by 80 percent since 1940, with 40 percent of this loss taking place between 2000 and 2008. This is largely due to rapid population growth, rampant economic development, and resource exploitation.

Today in Timor-Leste mangroves occupy only a small area when compared to neighboring countries, such as Indonesia and Australia.

“If we make a simple visual comparison, say 30 or 40 years ago, the mangrove coverage in Timor-Leste at present will look very much smaller than what we’ve ever seen before,” said Mr. Mau.

Timor-Leste has a coastline stretching almost 750 kilometers. About 40 percent of the population – or almost 560,000 people – live in low-lying coastal areas. They are susceptible to floods from upstream hills and also face increased sea surges and storms.

These climate hazards have serious impacts on peoples’ lives: from physically damaging schools, homes, and community buildings to contaminating drinking water by seawater intrusion. Furthermore, they also hurt coastal ecosystems, especially for mangroves, which are already under stress as more ports are built and roads are widened.

“There needs to be a holistic approach to rehabilitating and restoring our mangrove forests,” stressed Mr. Mau. “We have to not only focus on the trees, but we have to also seriously think about how we can improve livelihoods and create new jobs for our local communities.

Indeed long-term resilience of coastal areas demands comprehensive approaches that examine and address all factors – environmental, economic, and social. Mangrove restoration also needs to be addressed from the national level through to the community level.

USAID Adapt Asia-Pacific, in collaboration with the United Nations Development Programme (UNDP), is helping Timor-Leste to design a project to do just that.

A team of USAID Adapt Asia-Pacific specialists in mangrove ecosystems, shoreline management, and gender and social inclusion are helping to develop frameworks to restore at least 1,000 hectors of degraded mangrove areas, while, at the same time, strengthen the livelihoods of local communities, particularly women, through direct employment.

This collaborative effort is part of a Global Environmental Facility US$ 7 million project – “Building shoreline resilience of Timor-Leste to protect local communities and their livelihoods” – that will be financed by the Least Developed Countries Fund (LDCF), with potential co-financing totaling US$27.5 million. USAID Adapt Asia-Pacific is involved in the design of this project.

The project is supporting the sustainable rehabilitation of the mangrove forests and creating livelihood economies that rely on the existence of the mangroves, such as agroforestry, sea grass cultivation, and salt production.

Timor-Leste’s Ministry of Agriculture and Fisheries and other related ministries will use the LDCF resources to work together with local communities, as well as with UNDP, to develop coastal land use strategies that restore and protect the mangrove forests.

“Planting 1,000 hectors of mangrove will be a good contribution to recover our coastal areas, but it won’t be easy,” said Mr. Mau. “To ensure good results, we will need everyone’s support for this project – we will need all hands on deck.”