Trees fell and roads flooded but storm appears to have done less damage than feared.

Rain, wind, and surging seawater from a tropical storm have buffeted coastal villages and tourist resorts on southern Thailand’s east coast, knocking down trees and utility poles and flooding roads.

One person was reported dead and another missing after a fishing boat with a crew of six capsized in high waves, but by nightfall it appeared that Tropical Storm Pabuk had caused less damage than feared.

Airlines and boat operators suspended operations for safety reasons and some tourists were forced to change travel plans. Beaches were closed but some bars and restaurants on the popular island of Koh Samui remained open.

Before the storm, more than 6,100 people were evacuated from their homes in four provinces, according to the department of disaster prevention and mitigation.

The meteorological department said the storm had maximum sustained winds of 47mph when it made land shortly after noon. It warned of continuing strong winds and waves 3-5 meters high in the Gulf of Thailand and 2-3metres in the Andaman Sea. It advised all ships to stay ashore on Saturday and warned of possible storm surges on the Gulf coast.

“We can expect heavy rain and downpours, flooding and flash floods in the area throughout the night,” said the department’s director general, Phuwieng Prakhammintara. 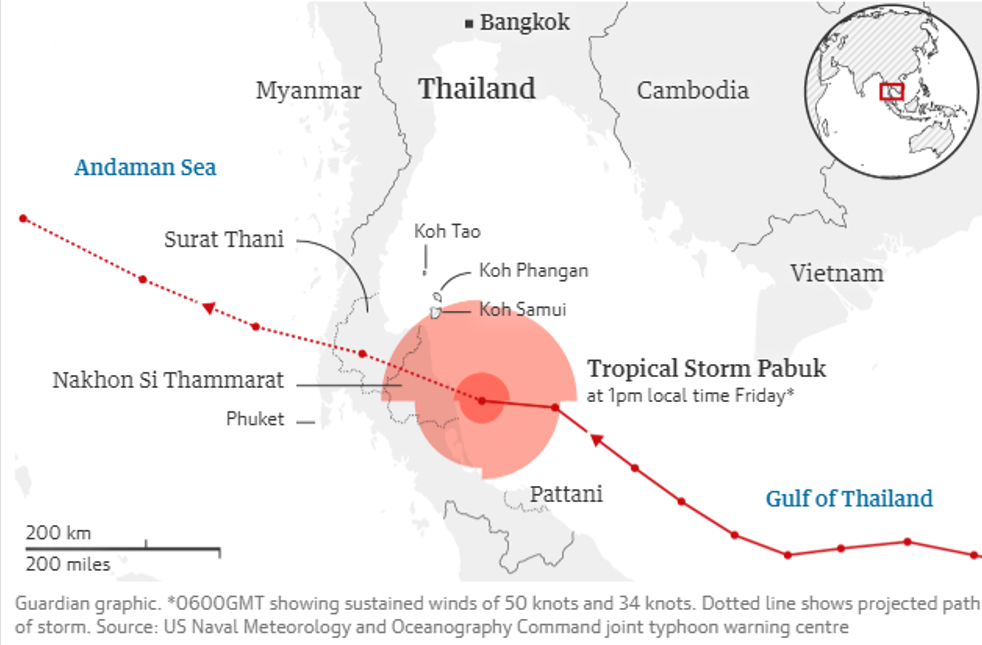 Koh Samui appeared to have been spared the brunt of the storm. By Friday evening, the rain there had stopped, said Joe Kieta, an American visitor. “So it seems like the worst is past us.”

Kieta, the editor of California’s Fresno Bee newspaper, said in an email that roads on the island had light debris, his hotel’s beach area was closed and guests had been discouraged from going out.

Southern Thailand also has popular resort destinations on its west coast on the Andaman Sea, and they now await the storm.

The navy said Thailand’s sole aircraft carrier, the HTMS Chakri Naruebet, was on standby at its base east of Bangkok, prepared to sail to help with relief efforts at a moment’s notice.

There had been fears that the storm would be the worst to hit Thailand since 1989 when Typhoon Gay left more than 400 people dead. A tropical storm in 1962 killed more than 900 people in the south.