The miracle method for sustainable rice – and bigger harvests

A technique developed by a Jesuit priest is producing bumper crops – and reducing emissions of a grain responsible for 1.5% of greenhouse gases 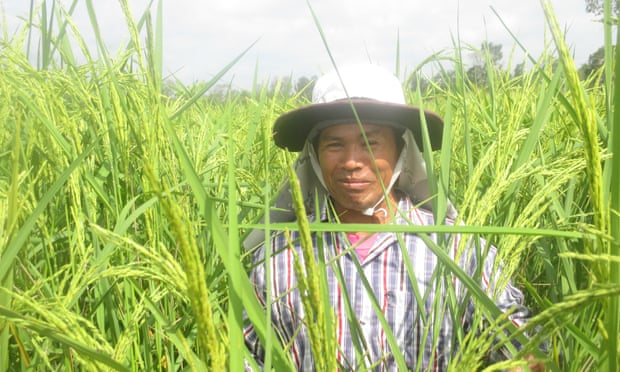 Each plant has 15 or more tillers or stalks, and the grains hang heavy from them. The Thai farmer says this will be his best-ever harvest in 30 years and he will reap it four weeks earlier than usual.

It is very different on the other side of the field. Here, Junpeng planted his rice in closely spaced clumps of 20 or more seedlings in shallow water just as he, his father and millions of other small farmers across south-east Asia have always done. He used the same seeds but the conventionally grown plants are wind-battered and thin, and clearly have fewer, smaller grains.

Junpeng is part of a pilot project to see if it’s possible to grow more rice with less water and fewer greenhouse gases. The dramatic difference between his two crops points a way to help the world’s 145 million small rice farmers, and could also greatly reduce global warming emissions from agriculture.

The project, backed by the German and Thai governments and by some of the world’s largest rice traders and food companies, has seen 3,000 other farmers in this corner of Thailand’s “rice basket” near the Cambodian border trained to grow sustainable rice according to the principles of a revolutionary agronomical system discovered by accident in Madagascar in the 1980s.

Jesuit priest Henri de Lalanié working in the highlands observed that by planting far fewer seeds than usual, using organic matter as a fertilizer and keeping the rice plants alternately wet and dry rather than flooded, resulted in yields that were increased by between 20 and 200%, while water use was halved. Giving plants more oxygen, minimizing the competition between them and strictly controlling the water they receive is thought to make them stronger and more resilient to flood and drought.

When it was first employed outside Madagascar in 2000, the system of rice intensification (SRI) was dismissed by a handful of scientists who questioned the legitimacy of the reported increased yields. But since then, it has evolved and been developed by peasant farmers working in many different climates around the world.

Academic criticism has since all but disappeared and the SRI system of farming has been validated in hundreds of scientific papers and adopted by up to 20 million farmers in 61 countries, according to the SRI information center in Cornell University.

“SRI is very positive in west Africa. It uses fewer seed and fertilizers and needs less water. Farmers saved up to 80% of the cost of seed and got increased yields and incomes. They see the advantages and they change. People are teaching each other now,” says Professor Bancy Mati, director of the water research center at Jomo Kenyatta University in Nairobi, Kenya.

The Thai farmers who took part in the Ubon Ratchathani trial say they are delighted. Says Khampha Bunchansee from Noan Dang village: “It was very easy to learn. I will use the extra money to invest in a tractor. If I can do it, anyone can. Everyone can come and learn.”

“I applied more fertilizer on my conventional crop but it produced lots more leaf but not more grain,” says Wanna Sriwila, also from Noan Dang. “Now I bring other farmers to see what can be done. Seeing is believing.”

But what is now exciting some of the world’s largest food corporations and governments is that growing rice along SRI principles also greatly reduces emissions of the powerful greenhouse gas methane, which escapes when rice, or any other crop, lies waterlogged for weeks at a time. 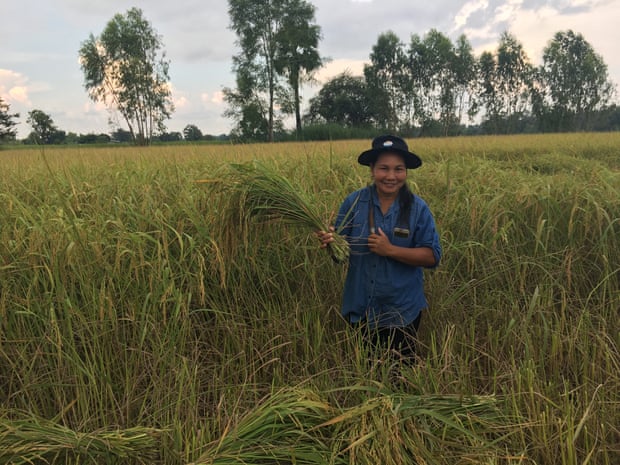 Methane is roughly 30 times more powerful than CO2 as a greenhouse gas, and rice emits as much as 1.5% of the world’s total greenhouse gas emissions. With the human population in south-east Asia expected to grow by around 100m people in the next 20 years, emissions from rice-growing could increase 30% or more.

The urgency to act for the global good, self-interest in maintaining production and the possibility of accessing money to reduce farm emissions has now led heavy rice-using food companies like Mars and Kellogg’s, and the agri-business colossus Olam, to set up the Sustainable Rice Platform (SRP).

This coalition of companies, NGOs and governments set the world’s first voluntary sustainability standards for rice growing. It adopts the basic SRI principle of planting seedlings further apart, and keeping them moist rather than flooded, but adds targets and measurements to provide consistency.

“Rice is both a victim and a cause of climate change,” says Sunny Verghese, CEO of Singapore-based Olam’s, which grows its own rice on 25,000 acres in Nigeria, owns mills and processing plants across south-east Asia and ships nearly 20% of the world’s globally traded rice.

“South-east Asian rice farmers are among the world’s most vulnerable to climate change impacts such as rising sea levels, salinity, temperature rise, and droughts. Yields can decrease as much as 10% for each 1C temperature increase, threatening food security for billions of people.

“With another two billion people we cannot carry on the way we are. We must go beyond what is currently being done and achieve far more at greater scale. We must re-imagine the whole food supply chain if the world is to become carbon neutral by 2050,” he says.

“SRI should influence everyone’s thinking. In Nigeria, we saw a 70% increase in yields, albeit from a low base. SRI is revolutionary. It is a genuine change in thinking. It is difficult for scientists to understand that an amateur [like Lalanié] should have a solution. We want to partner with SRI, to scale up in Africa.

“But reducing emissions from rice cannot be a trade-off that hurts farmers and communities who depend on it for their income and sustenance. We have to measure the true cost of food and dismantle the subsidy system.”

Governments and global bodies must act too, says tropical agronomist Erika Styger, director of climate-resilient farming systems at Cornell University who led a three-year World Bank study of 50,000 farmers using SRI methods in 13 west African countries. This saw a 56% rise in yields in irrigated areas, an 86% increase in rain-fed areas and an average 41% increase in income.

“The SRI revolution is happening. People are changing their practices and you can see SRI in the field in many places now. There is no reason why SRI should not become normal agronomic practice,” says Styger.

“But there is no long term funding. If we want to make it mainstream it needs to get to a critical mass. We are left with breadcrumbs, with only short-term project finding,” she says.

“The food system is broken. Olam on its own cannot fix it, we can only change it. We can’t do it overnight but there is a new way of collaborating. Companies must change and reduce their resource intensity. The whole food sector must change,” says Verghese.

“What is needed now is large retailers to brand SRP. It’s the way we can reduce emissions, use less water and grow more. Win. Win. Win.”