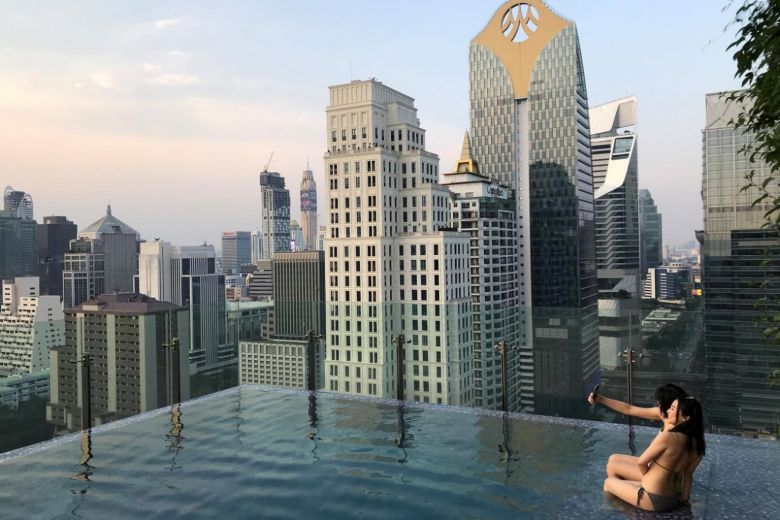 Tourists enjoy a swimming pool at a hotel in central Bangkok, Thailand, on Jan 21, 2019. PHOTO: REUTERS

There is a 50 percent chance this year could be the second hottest ever.

People must brace for extreme heat in the days to come, as an extraordinarily hot and arid summer has been forecast for Thailand from Thursday (Feb 21), while seven provinces in the North and the West are expected to experience extreme heat of 40 to 44 deg C, experts have warned.

The entire planet will see a warmer-than-usual climate this year, the world's leading climate scientists have warned.

They said that if the global temperature kept rising, there was a 50 percent chance the global average temperature in 2019 will break the previous year's record and become the second-hottest year ever in history.

Due to the forecast for scorching heat in Thailand this summer, the Disease Control Department's Occupational and Environmental Diseases Bureau director, Dr Chantana Padungtod, has urged people to be more cautious about exposure to the heat for too long and to keep hydrated so as to avoid a heat stroke.

"Outdoorlabourersare among the groups facing the greatest risk of heat-related sicknesses, as many of them, such as construction workers or conscripts, have to undertake hard physical labor or long hours under the hot sun. Employers should consider the health and well-being of their workers by shortening their working hours during hot days,"DrChantana suggested.

"The elderly are also vulnerable to being affected by the heat wave, especially those who live alone in condos because most high-rise residences lack airflow and can be dangerously hot during the daytime. Family members or their guardians should not leave the seniors alone," she suggested.

She also urged people to always eat clean food and maintain a hygienic way of life in order to prevent diarrhea and other illnesses, which are common infectious diseases during the summer.

Meteorological Department director-general Phuwieng Prakhammintara told a press conference in Pattaya last Saturday (Feb 16) that summer will officially begin in Thailand on Thursday, and the climate in every part of the country would become very hot and arid during the following months until the rainy season arrives in May.

MrPhuwieng warned that people in the upper part of Thailand would have to endure unusually hot weather in March and April this year, as the temperature could soar to over 40 deg C for several days, which would be hotter than last year's by around 1 to 2 deg C.

He further noted that Mae Hong Son, Lampang, Uttaradit, Sukhothai, Tak, Nakhon Sawan, and Kanchanaburi will face extreme heat up to 44 deg C during the height of summer.

However, he said it was unlikely that the temperature this year would break Thailand's all-time record of 44.6 deg C, measured at Mae Hong Son on April 28, 2016.

Earlier this month, the Meteorological Department's Climatological Centre forecast that the average maximum temperature this summer in the upper part of the country could reach 35 to 37 deg C, which would be higher than both the long-term mean temperature during this time of the year of 35.3 deg C and the previous year's 34.2 deg C.

"While we expect temperature levels higher than usual in every part of the country this year, people should be cautious about water shortages too, as precipitation during this summer is also expected to be lower than average, so we should use water wisely during the summer months,"MrPhuwieng said.

He also cautioned people to beware of the danger to lives and property from intense summer storms, wildfires and tropical cyclones in the Andaman Sea.

According to the temperature record during this winter, it was found that the country was warmer than average, especially in the Central Region and the Bangkok metropolitan area, which experienced only a few cold days.

The temperature record with the Meteorological Department last December showed that Bangkok experienced 22 days of very hot weather of 32 deg C, which is even higher than this month's maximum temperature mean.

There were 11 days in January when the days were extraordinarily hotter than average.

The Climatological Centre explained that the unusual climate pattern in Thailand and the Asia Pacific region during this summer was partly a result of the influence from the active El Nino in the Pacific Ocean, which contributed to hotter and drier climate on the western part of the Pacific.

Climate change was also responsible for extreme weather patterns this summer, according to an academic observation about global warming trends in 2018.

On the global level, United States space agency Nasa and the National Oceanic and Atmospheric Administration (NOAA) announced earlier this month that 2018 was the fourth warmest year since 1880.

According to scientists at Nasa's Goddard Institute for Space Studies (GISS) in New York, the earth's surface mean temperature in 2018 was 0.83 deg C warmer than the 1951to 1980 mean.

GISS director Gavin Schmidt said that the global temperature in 2018 ranked behind only those of 2016, 2017 and 2015, so the past five years were, collectively, the warmest years in modern records.

Dr Schmidt stressed that worrisome warming had been driven in large part by increased emissions into the atmosphere of carbon dioxide and other greenhouse gases caused by human activities.

"The impacts of long-term global warming are already being felt - in coastal flooding, heat waves, intense precipitation, and ecosystem change," he warned.

The NOAA also revealed that it had detected the highest-ever atmospheric carbon concentration level of 414.27 parts per million at the Mauna Loa Observatory last Monday.

The global temperature is expected to further rise this year and could eventually make 2019 the second hottest year ever, climate change analysis by Berkeley Earth predicted.

"At present, it appears that there is roughly a 50 percent likelihood that 2019 will become the second warmest year since 1850," the analysis noted.