Executive secretary says ‘progress was made, but nothing was finalized’. Nations will meet again in Poland in December. 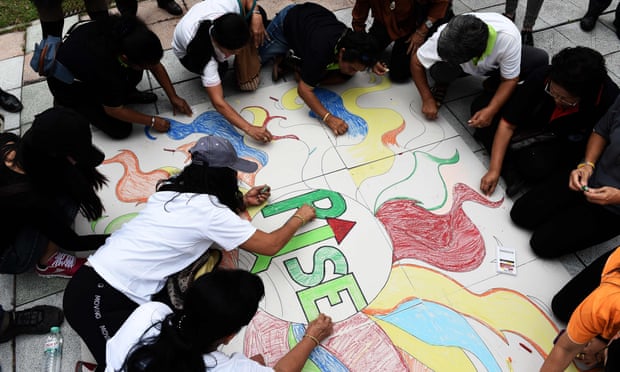 An international meeting in Bangkok fell short of its aim of completing fruitful preparations to help an agreement be reached in December on guidelines for implementing the 2015 Paris climate change agreement.

The six-day meeting, which ended on Sunday, was scheduled to step up progress in the battle against rising global carbon emissions by adopting a completed text that could be presented at the COP24 conference in Katowice, Poland, three months from now.

A primary objective of the 2015 Paris agreement, to which 190 nations subscribe, is to limit the global temperature increase by 2100 to less than 2C and as close as possible to 1.5C, which is vital to the survival of island nations threatened by rising seas. But the absence of guidelines for meeting that goal has led to fears that not enough action is being taken.

There have been notable disagreements over fair financing for implementation of the rules by developing countries, and the technical details of their reporting on progress.

Patricia Espinosa, executive secretary for the United Nations Framework Convention on Climate Change, said on Sunday at the closing press briefing for the Bangkok meeting that progress was made on most issues but nothing was finalized.

The meeting was attended by representatives of most of the countries party to the Paris agreement, as well as the United States, which has announced that it is pulling out of the pact. 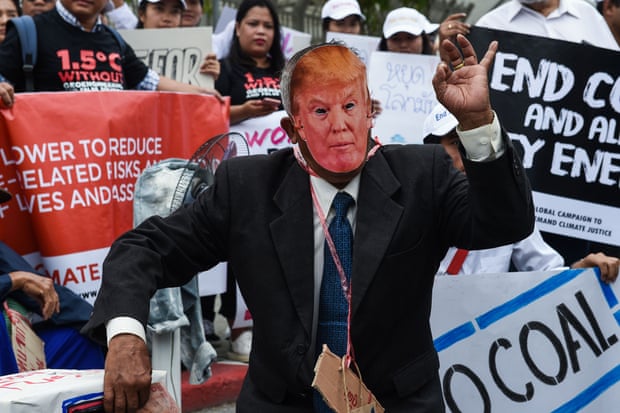 An environmental activist wearing a face mask depicting US President Donald Trump takes part in a demonstration in front of the United Nations building in Bangkok. Photograph: Lillian Suwanrumpha/AFP/Getty Images

Espinosa said there was “limited progress” on the issue of contributions from developed nations to developing countries, adding that she is “hopeful” that future discussions will be productive because of the importance of the issue.

“On the core issues of forward-looking climate finance and the degree of flexibility developing countries should be given on the information and reporting requirements for national commitments under the Paris Agreement, negotiators were stalemated in Bangkok,” said a statement from Alden Meyer, director of strategy and policy for the Union of Concerned Scientists, a US-based activist group.

“It’s now up to the incoming Polish presidency and officials leading negotiations to find ways to bridge the deep differences on these issues and to secure agreement in Katowice on a robust, comprehensive package of rules to implement the Paris Agreement,” he said.

Harjeet Singh, climate policy manager for ActionAid International, said that a vital component of the Paris agreement is for wealthy nations to provide financial assistance to developing countries as they fight natural disasters brought by climate change.

But he said wealthy and developed countries “led by the United States and including countries such as Australia, Japan, and even the European Union” refused to clearly show “how much money they are going to provide and how that is going to be counted.”

Advocacy for the developing countries was led at the meeting by China, said Meyer, but was also supported by others, including India, Iran, Saudi Arabia, and Malaysia.

Activists were critical of Washington’s lobbying at the meeting, especially because president Donald Trump has announced plans to have the US withdraw from the Paris pact, which had been heavily promoted by his predecessor, Barack Obama.

“The US has announced its withdrawal from the Paris Agreement but still negotiates as if it is a party, weakening international cooperation by not contributing to finance and technology transfer to developing countries,” Meena Raman, legal adviser at Third World Network, said in an emailed statement.

Climate change is a polarising issue in the United States, and some states and local communities have announced policies supporting the Paris agreement.

Thousands of governors, mayors, company CEOs, and civil society leaders are expected to gather this week in San Francisco for the Global Climate Action Summit.