The Trump administration’s decision to withdraw from the Paris Agreement last week was regarded as a step backward for Alaska. 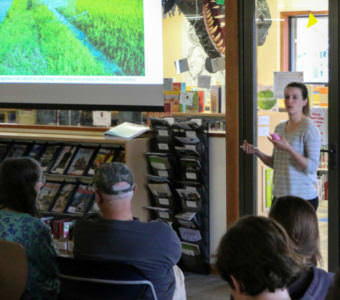 Lione Clare presenting her photo story to fellow Sitkans. (Photo by Cameron Clark/KCAW)Following the president’s decision, Gov. Bill Walker announced that “Alaskans know our landscape is changing at an accelerating pace. We are experiencing social and economic upheaval caused by shrinking sea ice, rising sea level, increasing intensity of storms, and increasing coastal erosion.” And it’s not just Alaska. A college student from Sitka is exploring how climate change is affecting Southeast Asia too.

Lione Clare has created a climate change presentation entitled, Vulnerable Vietnam: A Photo Story Focused on Climate Change in the Mekong Delta. She gave the show at the Sitka Public Library on June 1, the same day President Trump withdrew the United States from the Paris Accord.

For the last part of December and January, she traveled Southern Vietnam seeing firsthand what climate change is doing to communities halfway around the world.

“Climate change is obviously a global issue there are some countries in the past that have contributed more to the problem through greenhouse gas emissions, ours being one of them, and it turns out that countries like Vietnam have not contributed as much but are feeling some of the impacts of climate change,” Clare said

Clare focuses on four main themes: food security, coastal forests, renewable energy and migration. All of her pictures were organized into one of these categories.

Clare’s photos are rich with color, capturing the beauty of Vietnam, while also showing often-unseen problems in the region. 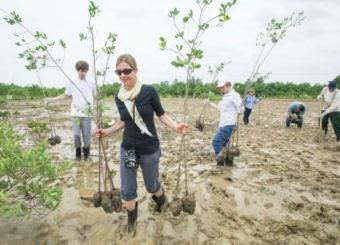 Mangrove forest ecosystems are critical to the coastal zones of Vietnam because they help to sustain food security and ecosystem function. Clare and the rest of her group helped plant some. (Photo courtesy Lione Clare)“This is at Cần Giờ Reserve, we spend half a day here actually participating in a restoration effort that’s been ongoing since the war ended because in this area 20,000 hectares of forest were destroyed to clear war zones during the war. Since then, they’ve been working to rehabilitate the Mangrove Forests,” she said.

The hour-long presentation left members of the audience more interested in the region.

“I was really encouraged by the steps that people in Vietnam are taking to mitigate their problems with climate change, to work with various systems both highly technological and certain basic agricultural systems,” Galen Paine said.

Others in attendance, like Karen Hegyi, can’t wait to see what else Clare will do next.

“I thought she did a great presentation, I’m looking forward to seeing more in the future from her. I think she’s got a great future ahead of her,” she said.

So far, Clare has given her presentation three times at the University of Montana and has a photo exhibit there as well. She will graduate in December and plans to continue her work.

“I’m focused on climate change in school, I’m learning about it, but actually seeing it impact an area in the world and people was pretty eye opening,” Clare said. “Being able to capture that in photos and tell a story was something that was a challenge for me. I never really done it before, but it’s definitely something I would like to do again in the future wherever I might travel.”

Until then, Clare adds Vietnam to her ever-growing list of countries she’s visited and photographed.