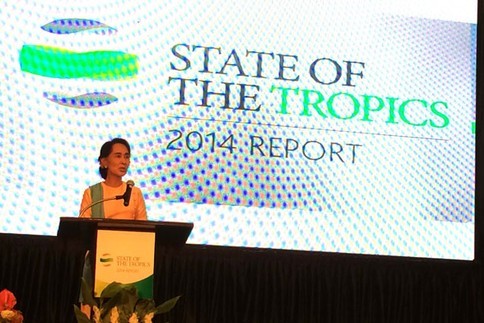 Nobel Peace Laureate Aung San Suu Kyi launched the State of the Tropics Report in Myanmar on Sunday as she urged people to be better carers of the environment. Image: Nyein Nyein via The Irrawady

A landmark environmental report has found that tropical countries — in particular those in Southeast Asia — are the most vulnerable to climate change.

The three-year study by scientists worldwide also found that the tropics is getting hotter and larger.

Covering some 130 countries and territories around the Equator and situated between the Tropic of Cancer in the north and the Tropic of Capricorn in the south — the tropics is expanding as climate change heats up the earth, turning more and more countries into a hot zone.

It is a growing concern and Nobel Peace Laureate Aung San Suu Kyi has called for people to be better carers of the environment as she launched the State of the Tropics Report in Myanmar.

A collaboration between 12 research institutions, the report presents for the very first time a scientific snapshot of the tropical realm.

It shows that by 2050, the tropics — which is now home to about 40 per cent of the global population — will shelter half the world’s residents and 67 per cent of its children.

Their lives could be in grave danger as the region — particularly Southeast Asia — is the most vulnerable to climate-change risks.

Ninety nine per cent of its total population live in developing countries, with lower resilience to any extreme weather events.

Professor Peter Ng, who is with the Tropical Marine Science Institute at the National University of Singapore and a contributor to the State of the Tropics Report, said: “In communities which are growing very fast, with a lot of people, poor people, developing economies — they won’t have time to think about resilience. And that’s when the tragedy will come.

“Do we expect unfortunate events on a grand scale? Yes. A lot of people will suffer and die if we don’t plan for the worst-case scenario coming up.”

When resilience is limited, the impact of any calamity can be extensive as shown when Super Typhoon Haiyan hit the Philippines in 2013. At least 6,300 people were killed, with millions left homeless. Recovery is also far from complete.

As climate patterns go haywire, Southeast Asia has become more prone to natural disasters. Scientists gathering in Singapore to discuss the report said this issue should be urgently addressed.

Professor Steve Lansing, an environmental scientist at the Complexity Institute in Nanyang Technological University, said: “The ASEAN nations have lagged behind in their attention to scientific issues and environmental issues. It hasn’t been a major issue for collective management and that really needs to change.

“We’re not anticipating a crisis. We’re already in it.”

But it is not too late to act — Prof Lansing said the problems are man-made and countries still have time to pay closer attention to their natural environment and mobilise a more concentrated effort in dealing with climate change.

The State of the Tropics Report comes as a wake-up call to policy-makers - a sharp reminder that there are significant problems on the horizon. If they fail to take precautionary measures, the whole region will be in serious trouble, with the biggest casualties being those who call it home.