Deforestation in Borneo is slowing, but regulation remains key

The forests of Borneo, home to orangutans, clouded leopards, and pygmy elephants, are among the world’s most biodiverse ecosystems. But in the last century, the world’s third-largest island (shared by Indonesia, Malaysia, and Brunei) has lost a significant portion of its forests to fire, illegal logging and the expansion of palm oil and pulpwood plantations. Only half of its forest cover remains today, down from 75 percent in the mid-1980s. 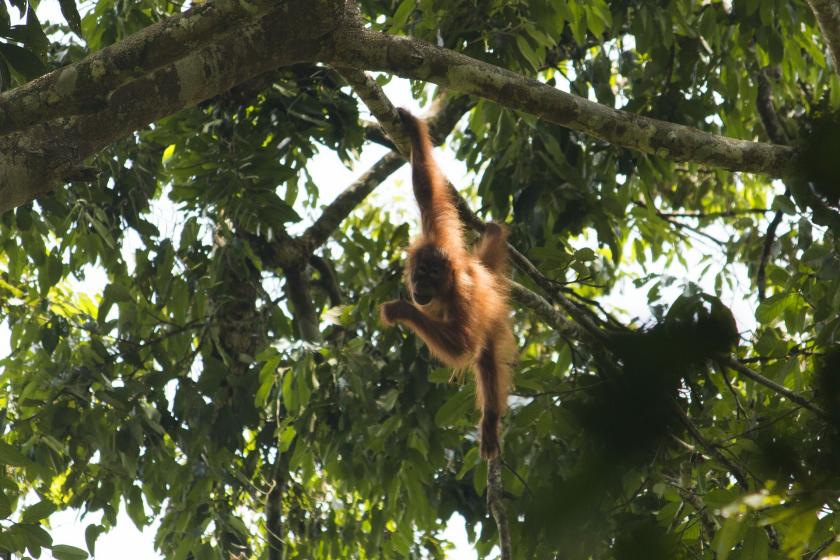 But a recent study published in the scientific journal Conservation Letters spells new hope for Borneo’s forests. Using a data set spanning nearly two decades, researchers from the Center for International Forestry Research (CIFOR) found that the expansion of oil palm plantations in Indonesian and Malaysian Borneo has actually slowed since 2012.

Using satellite imagery, the researchers measured total forest loss, how much plantation area was added, and how much forest was cleared and converted to plantations for each year between 2000 and 2017. This allowed them to determine whether old-growth forests were actually razed to clear way for new oil palm and pulpwood plantations, or if the plantations were installed on land that was cleared in the past for other purposes or lost to forest fire.

The scientists found that much of the plantation development, especially in Indonesia, occurred in areas that were cleared before 2000, long before the plantations were installed. Apart from two peaks in 2009 and in 2012, the expansion of industrial plantations has actually decreased, most likely due to a steady decline in crude palm oil prices since 2011. By 2017, the downward trend in plantation expansion, as well as the clearing of forests for plantations, reached a level that was the lowest since 2003.

While this is something to celebrate, work remains to ensure a sustainable future for Borneo’s forests. If palm oil prices go up as part of commodity price trends, effective government regulations and industry standards will be key.

While the study’s authors point to declining crude palm oil prices since 2011 as the most significant and direct cause behind the dwindling expansion of industrial palm and pulpwood plantations, the role of governments, civil society and the private sector cannot be discounted.

In 2011, the Indonesian government instituted a nationwide moratorium on issuing new permits for the use of primary natural forests, which was extended in September 2018. And in 2016, the country implemented a moratorium on the conversion of its major carbon sink, peatlands.

Peatlands are waterlogged ecosystems that contain massive below-ground carbon stores, often more than 20metresdeep, developed over thousands of years. When the water table in peatlands is disturbed, organic matter can quickly disintegrate or burn, releasing large amounts of greenhouse gases into the atmosphere, resulting in disastrous fire and haze events such as the one that occurred in 2015.

In October 2018, Indonesia established the International Tropical Peatlands Centre to study the conservation and restoration of these essential ecosystems, which cover large parts of Borneo.

“These moratoria were a major break with the past. As part of the letter of intent between Norway and Indonesia, they have, for the first time in modern history, triggered a decline in deforestation,” said Johan Kieft, Lead Advisor of the UN-REDD Programme in Indonesia. UN Environment is supporting the Government of Indonesia in implementing the moratoria.

The issue also galvanized the private sector into action. Many of the world's largest traders and producers of palm oil and pulpwood have pledged to eliminate deforestation from their supply chain through initiatives such as No Deforestation, No Peat and No Exploitation commitments, signed by companies participating in the Roundtable on Sustainable Palm Oil. These businesses account for 74percent of internationally traded palm oil.

Given that one of the main obstacles for forest conservation and restoration in Asia is the continuous flow of large amounts of capital into deforestation, systematic change across the banking sector will be crucial to slowing down future forest loss in Borneo.

To this end, UN Environment’s Finance Initiative is working with banks on a new initiative called the Principles for Responsible Banking. The Principles provide the industry with a single framework that embeds sustainability at the strategic, portfolio and transactional levels. They align banks with targets expressed in the Sustainable Development Goals and the Paris Agreement. Banks are required to report publicly on their positive and negative impacts, their contribution to society’s goals and their progress in implementing the Principles.

Twenty-eight leading banks from around the globe such as BNP Paribas and Barclays, jointly representing more than US$17 trillion in assets, came together to establish the Principles. In the Asia-Pacific region, it includes the CIMB Group from Malaysia, and the Industrial and Commercial Bank of China (ICBC). The banks were advised by a group of 12 civil society institutions, including Oxfam International and the World Wildlife Fund. Consultations on the Principles were launched at the UN Environment’s Finance Initiative Global Roundtable in Paris in November 2018 and a final version is expected to be unveiled in September 2019 during the United Nations General Assembly in New York.

“While these are a voluntary set of principles, we count on the support from regulators like central banks. For maximum impact, a circular conversation is needed between financial institutions and the authorities,” said Yuki Yasui, Coordination Manager at UN Environment’sFinance Initiative, Asia-Pacific.

Indonesia has made significant headway in terms of responsible investment. In May 2018, eight national banks—with accumulative assets reaching up to 46 percent of the country’s total banking assets—launched the Indonesia Sustainable Finance Initiative with the World Wildlife Fund Indonesia.

In addition to promoting sustainable banking practices, UN Environment has been supporting the Indonesian Government to improve its Integrated Fire Management for both peat and forest fires through the UN-REDD Programme, a multi-agency United Nations initiative that promotes forests as the key nature-based solution to global warming through climate mitigation.

This year, with the support of the Dutch government, and in partnership with Wageningen University, UN Environment will assist with the market development of sustainable crop alternatives for Indonesia’s smallholder farmers, encouraging them to swap out oil palm for more environmentally sustainable plantations like sago and jelutong.

New animated map of Borneo reveals expansion of industrial oil palm and pulpwood plantations (black: 88% oil palm and 12% pulpwood) and forest loss (green to another color) every year since year 2000 until 2017. Green to white= forest loss, green to black= forest cleared and converted to plantations in the same year, green to blue= forest permanently flooded by hydropower dams (see in the state of Sarawak, Malaysia), white to black=non-forest cleared and converted to plantations. The expansion of logging roads to extract natural timber are also clearly visible on this time lapse animation (see in the state of Sarawak where logging roads progressed right up to the border with Kalimantan.