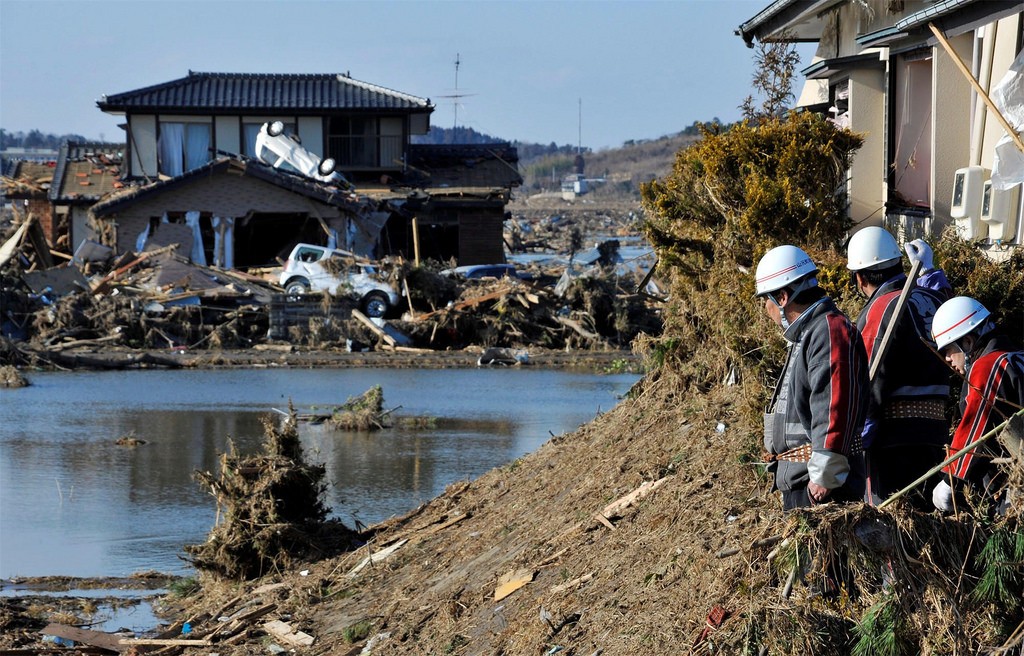 A scene of devastation in Japan after the 11 March earthquake and tsunami in 2011. Natural disasters are expected to intensify in strength thanks to climate change. Image: Warren Antiola, CC BY-NC-ND 2.0

Disaster risk management has always been a high priority in Southeast Asia, but climate change is making the problem all the more urgent and challenging, writes NUS’Vinod Thomas.

Southeast Asia, already on the path of tropical storms originating from the Western Pacific and Indian Oceans, has seen a spike in climate disasters as global warming aggravates these hazards of nature. The dangers are compounded by the fact that the region also has a high population density, with large urban populations in low-lying cities, including the megacities, Jakarta and Manila.

Extreme weather has pushed intense storms and floods further inland because of rising seas levels, be it in Thailand, Philippines and Vietnam, and produced deadlier heatwaves like the recent ones in China and India—and the dry spells in 2014 and 2015 that threatened Singapore’s reservoir levels.

Southeast Asia has built capabilities and infrastructure for disaster management over the years. But climate change has raised the bar for risk management much higher, leaving vast gaps in disaster risk management. My recent book calls attention to the urgency of increasing smart investments in climate mitigation and disaster resilience.

Resilience building has high payoffs. Most notably, early warning systems and more robust evacuations of populations living in the paths of typhoons have reduced death tolls over the years. Japan is on the frontier of building such systems: its Meteorological Agency recently updated its Evaluation Alert System, mapping the intensity of weather-related hazards and people’s special needs.

While countries are improving their national emergency capabilities, central governments often defer to their local counterparts for the choice of the systems to adopt. Advances in ground-based networks of radars, but increasingly also on satellite data, are key to the nearly continuous observation of global weather. As satellites provide information for wide geographic areas, including oceans, improvements in forecasting have made warning systems more efficient.

The use of telephone-based capabilities for emergency warnings is expanding rapidly, owing in particular to the explosive development in mobile networks. For example, Australia’s Emergency Alert enables states and territories to issue warnings to landline and mobile telephones linked to properties in areas identified as being at risk. It works across all telecommunication carrier networks.

With rising sea levels and temperatures, previous norms of the safe distance to live from coastline must be revised.

Companies can help to make infrastructure more resilient, improving the speed of recovery after disasters strike. Redundant systems for critical infrastructure and waterproof or diesel-powered pumping systems can reduce the chance of water and power system failures. System intelligence is another form of hardening; embedding sensors and controls into power lines and water treatment plants can allow cities to assess hazardous conditions, take preventative actions and target repair efforts.

Disaster readiness also involves zoning regulations to restrict new development in hazard-prone areas and building codes to protect businesses, homes, and neighborhoods. These are an essential part of minimizing the kind of disruption to supply chains and information networks that we saw during the massive floods in Sri Lanka; Chennai, India, and Thailand in the past decade. With rising sea levels and temperatures, previous norms of the safe distance to live from coastline must be revised.

With the increased frequency of floods and storms, governments and external financiers need to facilitate credit for rebuilding lives and livelihood, especially for the poor and vulnerable. We have also seen high payoffs to investing in education, information sharing and capacity development in dealing with these calamities. The weak handling by the authorities of Hurricane Katrina in 2005, the costliest disaster in the US, has had lessons for coordination across government units during Hurricane Harvey, the deadliest flood in the US in decades.

The higher bar also means that climate mitigation through switching to low-pollution, low-carbon technologies is a must. A common threat to achieving the Paris targets for climate mitigation is the prospect that coal would become the region’s largest energy source by 2040. Failure to move away from fossil fuels, especially coal, could very well lead to their failure to meet the commitments on cutting emissions. The way forward will be to switch far more rapidly to wind, solar and other renewables in national energy mixes and to cut costly fossil fuel subsides as India and Indonesia have started to do.

Disaster risk management is always a high priority in Southeast Asia. Climate change is making the problem all the more challenging, calling for urgent action on climate mitigation and smart steps in disaster abatement.