Climate Change Is a Security Threat to the Asia-Pacific

Climate change is likely to alter the local physical and strategic environment profoundly, and potentially catastrophically.

This week the ASEAN Joint Task Force on Humanitarian Assistance and Disaster Relief (HADR) will meet via video conference, with the COVID-19 pandemic escalating just as some countries in the disaster-prone Indo-Asia Pacific enter their cyclone, drought, heatwave, or monsoon seasons. The overlaying of the pandemic with existing complex challenges is a timely reminder that planning for HADR capacities – and regional security – needs to be attuned to the increasing likelihood of multiple, overlapping hazards and converging security risks, especially in a future where climate change alters the context in which other disasters and crises take place. Developing a clearer recognition of how climate change can reshape the strategic environment will be essential for preserving regional security, stability, and prosperity in the face of complicated and interlocking challenges, as we argue in a new report on the Indo-Asia Pacific published by the International Military Council on Climate and Security (IMCCS).

The Indo-Asia Pacific is highly exposed to climate change impacts. Climate change is likely to alter the local physical and strategic environment profoundly, and potentially catastrophically. More frequent or intense extreme weather, sea level rise, and ocean acidification (among other climate impacts) will create a range of threats to the well-being and security of countries in the region, many of which are already threatened by disaster vulnerability and increasingly complex security tensions.

As well as the immediate physical impacts, climate change will increase food and water insecurity, contribute to forced migration and displacement, and challenge disaster response and recovery capabilities. The unprecedented hazards it creates will compound a broad spectrum of conventional, unconventional, and hybrid security risks and challenges. These include increasing geostrategic competition, maritime boundary disputes, the expanding military capabilities of many countries in the region (three of which are seeking to develop nuclear triads), WMD threats from North Korea, ongoing conflicts linked to separatist movements and transnational violent extremist organizations, and piracy and serious organized crime. The interaction between climate change impacts and this complex and evolving regional security landscape is likely to give rise to new and potentially catastrophic risks, which will emerge in ways that are perhaps foreseeable, but difficult to predict. 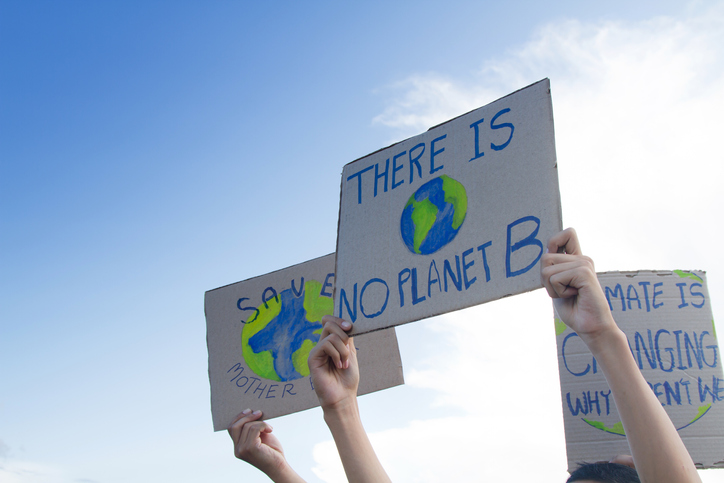 Risks Around the Region

Changes in the oceans are a particular focal point. The Indo-Asia Pacific’s coastal megacities and its far-flung island nations are highly vulnerable to sea level rise, storm surges, and saltwater intrusion into freshwater aquifers. Rapid depletion of fish stocks is already impacting food security across the region, and ocean acidification and rising temperatures will accelerate the trend, further straining the international rules-based approach to fishing governance. This could in turn increase tensions, violent confrontations, and military brinksmanship over the multiple overlapping and competing territorial claims in the South China Sea.

In Southeast Asia, there are already examples of how climate impacts on natural resources, economic hubs, and energy systems can affect domestic and regional security issues. Take Vietnam, where tensions with China over sovereignty, oil and gas claims, and fishing rights in the South China Sea risk being exacerbated by considerations of projected sea level rise, which may strengthen the rationale for building up Vietnam’s 49 outposts on submerged reefs and banks in the Spratly Islands. Vietnam must also plan for rising sea levels threatening to flood and salinate the Mekong Delta, the economic productivity of which is already threatened by changing weather patterns and upstream hydroelectricity projects.

The role of climate change in compounding tensions between states is another important lens. Reduced or altered water flows in the Himalayas and Indus river basin could further degrade the already tense India-Pakistan relationship by stressing the Indus Water Treaty, or necessitating more silt-clearing dam designs. This creates the potential for bad-faith actions, misunderstandings, or scaremongering, for example around fears that India might intentionally release floodwaters, or that Pakistan may accuse India of doing so in the context of climate change-driven flooding. The Indus river system is particularly crucial to Pakistan’s economy and energy security, and a Chinese partnership to build a cascade of five dams in Pakistani-held Kashmir and Khyber Pakhtunkhwa province under the Belt and Road Initiative has already raised concerns in India over sovereignty. Such dynamics threaten to deepen distrust and increase tensions between states, and this is without the climate-driven threat to water supplies. The complex nature of the two countries’ joint dependence on the Indus river system creates a high-stakes situation where climate impacts could drive and compound tensions, which might easily lead to hostilities, or otherwise worsen the confrontation between the two countries.

Chronic conflict has made countries like Afghanistan and Pakistan more vulnerable to climate stress, by eroding their resilience and coping capacities, and this in turn helps to create the conditions for continued violence. As the world’s top opium producer, Afghanistan’s drug trade may even stand to benefit from climate change, as it relies on a drought-resilient, water-efficient, and highly lucrative poppy crop which is well-suited for projected climate changes. The Taliban thrives on the opium trade, which may strengthen their negotiating position or further disincentivize pursuing a peace deal with the Afghan government. Farmers, armed opposition groups, and corrupt government officials might also see more advantage in opposing central government authority in drug-producing areas. The growing regional drug trade is already driving serious organized crime across the Indo-Asia Pacific. If climate change makes it easier to grow opium poppies, it could supercharge the effect.

The interplay between climate change and existing security challenges is not limited to direct impacts on countries’ national security. For example, Japan has exceptional disaster response capabilities and is a regional leader in risk reduction as well as a major aid donor in the Indo-Asia Pacific. However, its most important economic sectors are dependent on supply chain components and revenue from locations at risk from climate change, including key trading partners in Southeast Asia. Japan’s status as an aid donor, underpinned by its economic heft, is an important climate risk management factor, but this could be undermined by climate change and climate-related insecurity impacting its economy or trade partners. Mapping and understanding the full scope of the risks that climate change may pose is a daunting challenge.

In seeking to understand how climate change may complicate the future context for meeting such challenges, the emergence and ongoing consequences of COVID-19 are a useful reminder that even wealthy nations have serious societal vulnerabilities to complex systemic risks. The pandemic demonstrates that foreseeable crises can have severe social, economic, political, and security consequences, and reminds us that global interdependencies create their own vulnerabilities, which may be exacerbated by a changing climate – including supply chain disruptions, cascading natural disasters, and changing disease vectors.

Climate change is a high-probability, high-impact threat, which we can foresee. Security communities across the Indo-Asia Pacific will need to comprehensively address the risks created by climate change in order to achieve their mission in coming years. Considering climate security consequences with a broad aperture, including how they affect current and future drivers of fragility and instability, can improve the ability of civil and military institutions to coordinate comprehensive responses and shift to a more preventive posture.

Most fundamentally, the degree to which climate change will act as a driver of future regional instability in the Indo-Asia Pacific depends on global emissions trajectories and regional energy investment decisions. Addressing climate threats at their source by comprehensively reducing emissions will help to avoid tipping points in the climate system, and stave off potentially catastrophic security consequences.

Climate science is capable of providing some of the most accurate information available to policymakers about what the future will be like, and it presents a deeply concerning risk picture for the Indo-Asia Pacific. Taking a preventive and precautionary approach to addressing the significant climate security challenges in the region will help ensure it remains a zone of stability and prosperity, despite the unprecedented challenges that lie ahead.