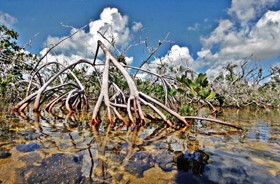 THE world continues to face an increasing number of natural catastrophes. In 2008, Cyclone Nargis struck the low-lying Ayeyarwady Delta in Myanmar, with winds of 215 kilometers per hours (kph) and accompanied by 12-foot-high waves that surged inland. The flooding left 84,500 people dead and 53,800 missing.

On September 24, 2009, Typhoon Ondoy (international code name Ketsana) struck Metro Manila and Central Luzon in the Philippines with winds of 105 kph and rainfall that exceeded that of Hurricane Katrina in the US. At least 500 people died, around 1 million families were affected, and damages to infrastructure and agriculture amounted to P11 billion ($242 million).

Thailand was devastated by severe flooding when Tropical Storm Nock-ten hit the country in July 2011. The flood, which affected 64 of Thailand’s 77 provinces, killed 800 people, damaged more than 3 million homes, and inundated about 2 million hectares of crops. The World Bank estimated the economic damages resulting from the flood at $45.7 billion.

On November 7, 2013, the world’s strongest typhoon, Yolanda (international name Haiyan), hit the Eastern Visayas in the Philippines creating a storm surge with waves almost 20 feet high. More than 11 million people were affected, with casualties at more than 6,000 and rising, as work is still ongoing in the affected regions. With damages estimated at $13 billion, rehabilitation work will take years and will require substantial international support.

Dealing with the new normal

THE increasing frequency and severity of storms, rainfall and drought highlight the growing vulnerability of Southeast Asian countries to extreme weather events. Thus, the region should brace for a climate-defined future, where climate change already has devastating effects on biodiversity and wildlife, agriculture, fisheries and other industries, and most especially, people’s health and well-being.

A report by the Asian Development Bank (ADB) on the impacts of extreme weather events stated that environmental hazards resulting from sea-level rise and associated storm surges would be a great concern for low-lying areas in Southeast Asia.

Highly vulnerable areas include the Mekong, Red and Irrawaddy deltas, as well as major cities situated at or lie close to sea level, such as Bangkok, Ho Chi Minh City, Jakarta and Manila.

A VITAL lesson learned from Nargis and Haiyan is the significant role of mangrove ecosystems in reducing damage to people and communities. According to the Food and Agriculture Organization (FAO), the Ayeyarwady Delta had 100,000 hectares of mangroves only, half of its original mangrove cover, when Nargis hit in 2008. Many experts agreed that the high death toll was due to the loss of mangrove forests, the area’s natural defensive wall.

On Haiyan’s warpath, the town of MacArthur in Eastern Samar, Philippines, had zero human casualties, which residents attributed to a band of mangrove forests that protected the area. Thousands died in nearby Tacloban City; perhaps more lives could have been saved if more protective mangroves had been in place.

Mangroves also helped reduce some of the impacts from the Indian Ocean tsunami in 2004. On December 26, 2004, a 9-magnitude quake released the energy of 23,000 Hiroshima-type atomic bombs, according to the US Geological Survey. Killer waves emanating from the earthquake travelled to 11 Indian Ocean countries and Africa (5,000 km away) with waves as high as 50 feet in some places.

The tsunami surged hundreds of feet inland, and the enormous force and weight of the water destroyed millions in property and killed up to 230,000.

Studies showed that areas hit by the tsunami that were protected by mangrove forests suffered far less devastation than denuded regions. In one region in Sri Lanka, only two people living near dense mangrove swamps died while up to 6,000 people in a nearby village without any similar vegetation were swept to their deaths.

Healthy mangrove forests are effective in reducing the force of waves because of the resistance provided by stilt roots, as well as their trunks and branches. Mangroves also trap and stabilize sediments and reduce the risk of shoreline erosion by dissipating surface wave energy.

Preparing for a climate-resilient future

ACCORDING to the Asean Centre for Biodiversity (ACB), the impacts of catastrophic events highlight the urgency of preparing for a future wrought with extreme weather events. This is particularly important for areas that are highly vulnerable, such as low-lying coastal communities, areas prone to landslide and flooding, as well as urban-poor communities.

There is also a need to conserve, expand and improve the management of biodiversity-rich areas, which are the planet’s natural defenses against disasters and the impacts of climate change.

In the aftermath of Nargis and Haiyan, the immediate reaction from the environment sector has been to restore coastal mangrove areas. In Myanmar, mangroves are being restored in the Ayeyarwady Delta. In the Philippines, the government has pledged P347 million ($7.6 million) for coastal-forest rehabilitation in Eastern Visayas.

WITH extreme weather events on the rise, defenses have to be built to prepare people and communities and reduce loss of life, properties and livelihood. Thus, ACB is proposing to governments and relevant stakeholders to:

The loss of life and infrastructure caused by natural calamities can reach unprecedented levels, affecting the rich and the poor but with more devastating impacts on already impoverished communities. Climate change and extreme weather are the new realities, and governments must act immediately to develop climate resiliency, particularly in vulnerable communities.

(National government ministries/agencies, local governments, NGOs and the private sector may wish to contact the ACB for technical assistance and advice in crafting policies and laws that will promote biodiversity conservation as a tool for protection against natural calamities. Contact: Atty. Roberto V. Oliva, executive director; E-mail: rvoliva@aseanbiodiversity.org">.)