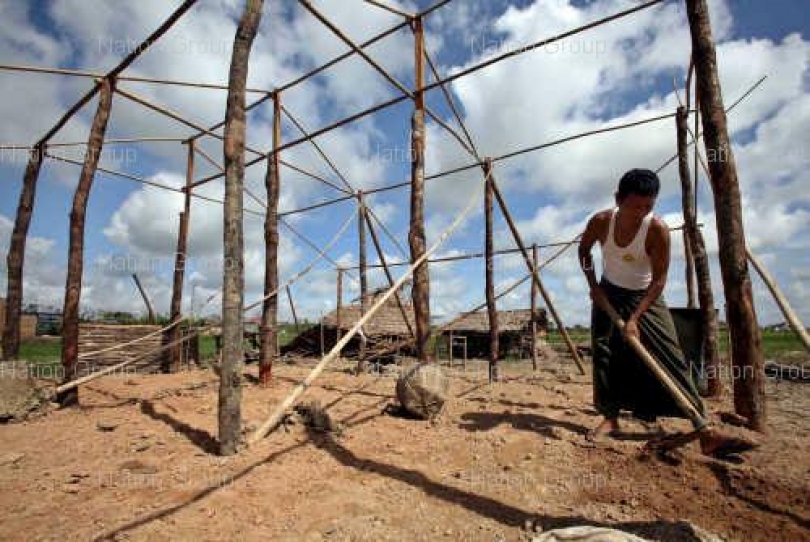 A man rebuilds his house at a cyclone affected area in the outskirts of Yangon. An estimated 1.5 million people in Myanmar were affected by Cyclone Nargis in 2008, making it the worst natural disaster in the country's history. EPA/EPA PHOTO

Southeast Asia will be highly vulnerable if no action is taken to address climate change, according to a study by the Asian Development Bank.

Economic losses under the 'business-as-usual' emissions scenario could be 60 percent higher than previously estimated, and this could reduce the region's gross domestic product by up to 11 percent per year by 2100, the ADB said in an analysis updating a 2009 report that estimated a 7-percent annual reduction in combined economic output due to climate change.

"The economic costs of not reining in greenhouse-gas [GHG] emissions are more serious than we previously estimated," said ADB chief economist Shang-Jin Wei. "At the same time, this new study also shows that reducing emissions and stabilising the climate will produce benefits and avoid losses for Southeast Asia, which in the long run sharply outweigh the costs of action."

An ADB brief which summarizes these findings, "Southeast Asia and the Economics of Global Climate Stabilisation", was released during the "COP21" conference on climate change in Paris.

The study looks at the economic impact of climate change across a range of scenarios, including business-as-usual, and another which sees countries taking steps to limit their GHG emissions to keep temperatures from rising more than 2 degrees Celsius above the pre-industrial era level.

The global analysis focuses on the region's five largest economies - Indonesia, Malaysia, the Philippines, Thailand and Vietnam - which account for 90 per cent of the region's emissions.

Southeast Asia's carbon emissions are just 7.4 per cent of the global total. However, the region has experienced rapid economic growth in recent years, and its GHG emissions have rapidly increased - at nearly 5 per cent per year over the last two decades.

Deforestation and land use account for most of the emissions. Energy efficiency in most of Southeast Asia is improving more slowly than in other areas of developing Asia or the world as a whole, while coal and oil have been rising rapidly as sources of primary energy. Southeast Asia's per capita emissions are currently near the world average, the report found.

In the study, the ADB noted that mitigation could be achieved by reducing land-use emissions, increasing the efficiency of energy usage, and replacing carbon-intensive fuels with cleaner alternatives.

The region can reduce the cumulative emissions significantly if it can increase energy efficiency. Low-carbon energy, such as from biomass and coal with carbon capture and storage, is most important in the longer term.

The task is difficult. The ADB's study shows that regional emissions must be cut by more than 60 per cent from the business-as-usual scenario, so that the concentration of GHGs can be stabilised at 500 parts per million (ppm) of carbon-emission equivalent by 2050.

'Avoided deforestation' is the major near-term low-cost abatement opportunity for Indonesia and Malaysia, where deforestation accounts for a large share of emissions.

Inclusion of averted deforestation in carbon markets could benefit the rest of the region by lowering carbon prices.

The report quantifies the net benefits to the region from acting to stabilise the climate, which are estimated at as much as five to 11 times more than the net costs.

The study assessed direct benefits from less climate change, such as improved crop yields, as well as the effects of improved air quality and better transportation that come directly from steps to reduce emissions.

Those steps have also been found to cost less as a share of GDP than the region has already been spending on energy policies, such as fossil-fuel subsidies. Reducing emissions will require action on a number of fronts, including a sharp reduction in the rate of deforestation, which accounts for the majority of Southeast Asia's current emissions.

Averting deforestation represents the lowest-cost opportunity for emissions reductions and could generate half of the cumulative regional mitigation through the mid-2030s.

The region must also step up efforts on energy efficiency with technologies that improve and reduce power use, which is found to be the biggest source of long-term emissions reduction.

The study notes that without changing existing energy-use patterns, which include fast-growing use of coal and oil, GHG emissions are likely to be 60 per cent higher in 2050 than in 2010. Reducing emissions is also contingent on developing and introducing low-carbon energy technologies, which would allow the GDP cost of decarbonisation to peak within 20-25 years.

Carbon capture and storage is a key technology to reduce emissions that the region should explore further, the report suggests.

The study found that by 2050, an additional US$30 billion (nearly Bt1.1 trillion) would need to be invested annually in Southeast Asia's power generation alone under a 500ppm scenario, but that this increased cost would be offset by savings in other energy investments.

The ADB also supports new research on advanced low-carbon energy sources. This will require over $2 billion annually from Southeast Asia by the early 2020s under the 550ppm scenario.

This investment seems small compared with the regional subsidies on fossil fuels. The region in 2010 spent more than 3 per cent of GDP on such subsidies, the bank noted, which is much higher than the estimated costs of climate stabilisation.

"Reducing these subsidies in a gradual and targeted manner - as Indonesia did in early 2015 - can free the resources needed to finance a low-carbon transition, while setting the right price signals for low-carbon development," it said.