The future of local farming: Balancing technology and nature

SINGAPORE - Imagine a future where all of Singapore’s vegetables are grown in a completely controlled environment, and where every stage of a plant's growth can be calibrated - from its soil composition to the amount of air and light it gets.

Such farm factories are fast becoming a reality indoors, located in warehouses and industrial buildings.

Hothousing them in this way allows for a faster and smarter way of growing greens, thanks to agrotechnology - such as the use of artificial LED light, computer-controlled watering and fertilising, and genome editing of crops. At the same time, such vertical farms have a smaller physical and energy footprint.

There has been rising interest around the world in indoor farms, said Associate Professor Sanjay Swarup from the Department of Biological Science at the National University of Singapore. "Not only (are we seeing) large-scale production which is under controlled conditions, but it is also now comparable to what people can get from outdoor cultivation."

Currently, there are around 200 food farms in Singapore producing fish, eggs and vegetables - 15 of which are indoor farms.

With erratic weather patterns arising from global warming, an increasing population and Singapore's heavy reliance on imported food, productivity is an oft-repeated buzzword in the local farming industry.

On Mar 7, the Government unveiled its Farm Transformation Map, with innovation and the use of technology seen as key means to boosting farm yields.

Likewise, productivity-related criteria were included in the tender assessment for new farm plots in Lim Chu Kang and Sungei Tengah, with farmers to tender for plots starting in August.

In an exclusive interview with Channel NewsAsia, Senior Minister of State for National Development Koh Poh Koon stressed the importance of the farming industry in contributing to Singapore's food security: "As opposed to many different industries, our local food farms have an important national duty to ensure that Singapore has some supply resilience.

"Therefore, we want to encourage our farms to adopt technology that make them more productive - increase their yield, decrease their loss, so that in times of need, we know we can be self-sufficient to some extent," Dr Koh said.

LOSING TOUCH WITH THE NATURAL WORLD?

But as technology sinks ever deeper roots in Singapore’s urban jungle, some in the industry say that its overemphasis may root out the rustic nature of farming and, for younger generations, a loss of knowledge of where our food comes from.

While older folks can recall childhood memories of chickens and cows roaming in their kampung, many children today only have the experience of seeing animals up close at the zoo or during farm tours. 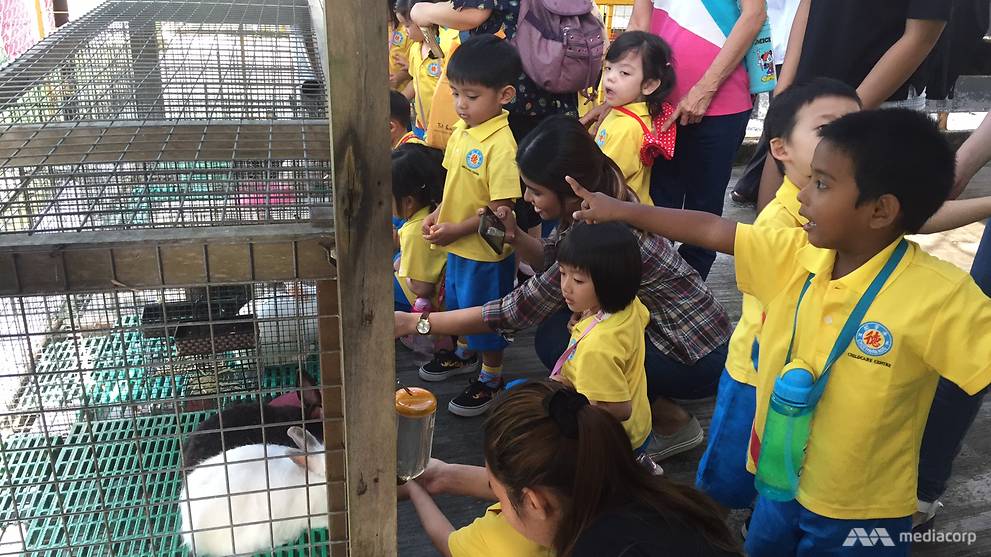 Children on a farm tour, where they interact with animals such as goats and rabbits - a first for many of the students Channel NewsAsia spoke to. (Photo: Wendy Wong)

It is that disconnect that has made second-generation farmer Chelsea Wan worried for her 21-month-old son.

"We shouldn’t be too engrossed about farms having to go high tech," said the director of Jurong Frog Farm. "Being a parent myself now, I hope my child will get to see both sides of the industry, the different ends of the spectrum - from the high-tech farm to the productive conventional ones.

"If children have to visit factories in future to see how animals and plants are grown, they really might lose their concept of how soil-based vegetables are important, how the environment really does affect the farming community, how climate change plays an important role as well," said Ms Wan.

"They might lose all that, to think that everything can be controlled and manipulated. So that might not be such a good thing for young children." 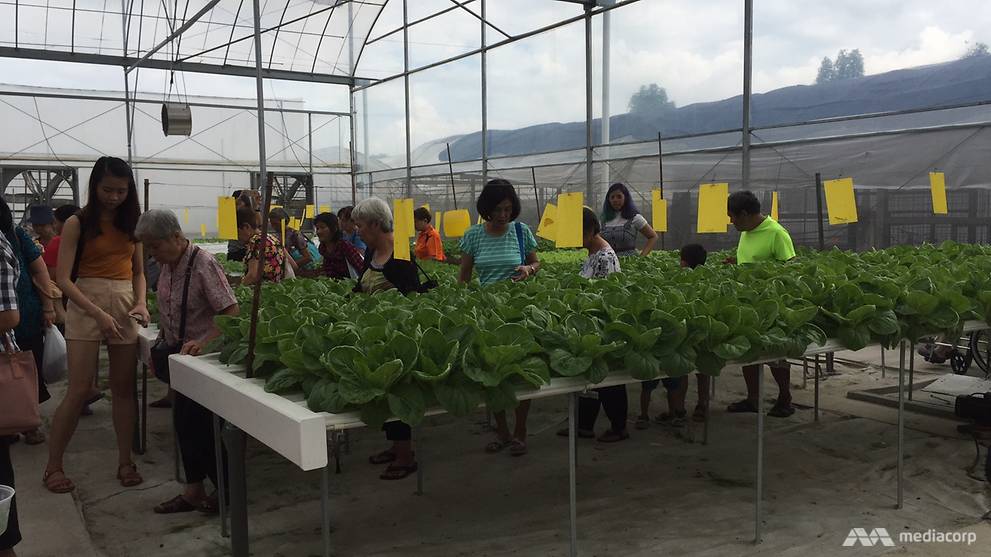 Children on a farm tour, where they interact with animals such as goats and rabbits - a first for many of the students Channel NewsAsia spoke to. (Photo: Wendy Wong)

Care should be taken when adopting any new technology, Assoc Prof Sanjay said.

"As we're getting away from less sterile outdoor conditions to indoor conditions, there will be a reduced load of bugs - or microbes - so that might or might not be good in the long run, because microbial exposure from the air and water and all around us help to improve our immunity as we grow up … So we still have to see the long-term effects of that."

EXPERIMENTING WITH THE BEST OF BOTH WORLDS

But some say that the value of traditional farming and of "farm factories" may not be a meaningful or accurate distinction.

"I think a lot of times when we talk about technology, the image that comes to mind is that of gizmo and gadgetry, expensive investment in machinery," said Dr Koh. "But technology means that we need to use something that is more related to science, and also have something that helps to reduce wastage and increase your yield.

"Farming technology spans a whole different spectrum - from simple things like automatic irrigation to putting in simple sensors which tell you the temperature," said Dr Koh. "These are actually simple technologies that existing farmers on the soil are actually using. So I do not think that it is beyond the reach of most of our land-based farmers."

President of the Kranji Countryside Association Kenny Eng agreed: "Innovation does not just equate to high tech. Innovation can be innovation in your production, concepts, being creative in your product range as well.

"Farming agriculture for that matter is not just production - there’s heritage, culture and education. These intangible assets are very critical for nation building in Singapore. Knowing where your food comes from is something that every parent hopes every child (will) know."

One such conventional soil-based farm attempting to incorporate both production and education is Kok Fah Technology Farm. Not only does the vegetable farm hold a weekly farmer's market and tours for the public, it has also adopted new machinery with the help of government funding. Such technology has helped to improve its yields by around 20 per cent - up to 120 tonnes of vegetables a month. 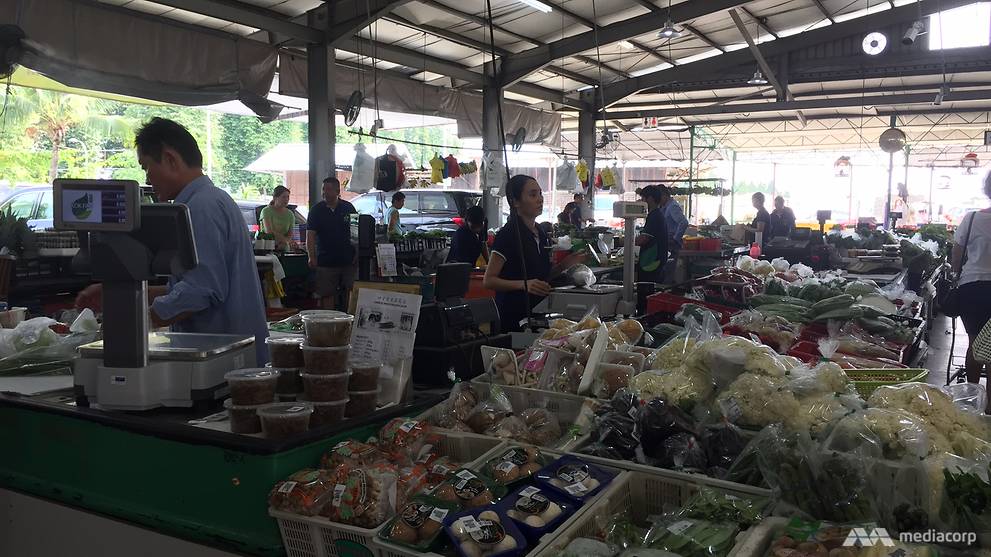 "We realised that manpower is getting more and more difficult to hire and it's getting more expensive," said its business development manager Dave Huang. "At the same time, the Government is giving out grants to offset all the machinery that you buy for the company. So that’s why we decided to adopt technology."

Since then, Mr Huang said that the farm has seen "better consistency" in its output, with the technology providing more consistent irrigation to its crops.

More young urban farmers are also exploring how to harmonise both the hardware and "heartware" of farming - such as Citizen Farm, a first-of-its-kind closed loop urban farming system. 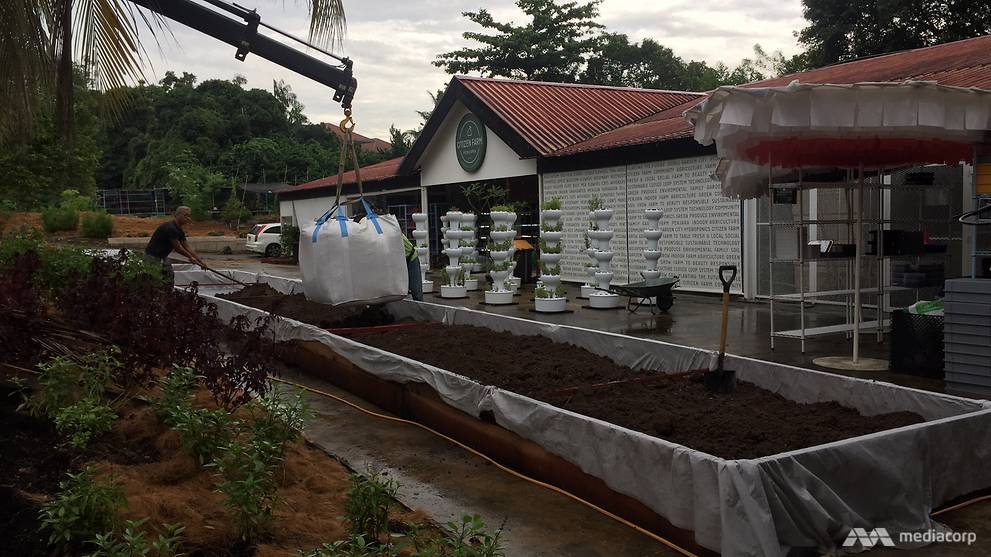 The 8,000-sq-m farm, located in Queenstown, makes use of insect farming to turn food waste into fertiliser, which is then supplied to its food crops.

"We incorporate natural elements in the modern technology we use today," said its head farmer Darren Ho. "We looked around in the cities and we realised what is in abundance is food waste. We use insect farming to turn this food waste into fertiliser, which is then transferred onto our growing systems, which then produces high-quality food. And then it goes back into our consumers which then generates food waste again.

"So this is part of this circular economy approach, as opposed to a linear approach, whereby you put inputs and expect outputs."

The farm grows its greens - such as microgreens, lettuce and tomatoes - in both indoor and outdoor spaces. It also has a mushroom farm and aquaponics farm rearing fish, with nutrients from its waste being absorbed by vegetables in its indoor farm. 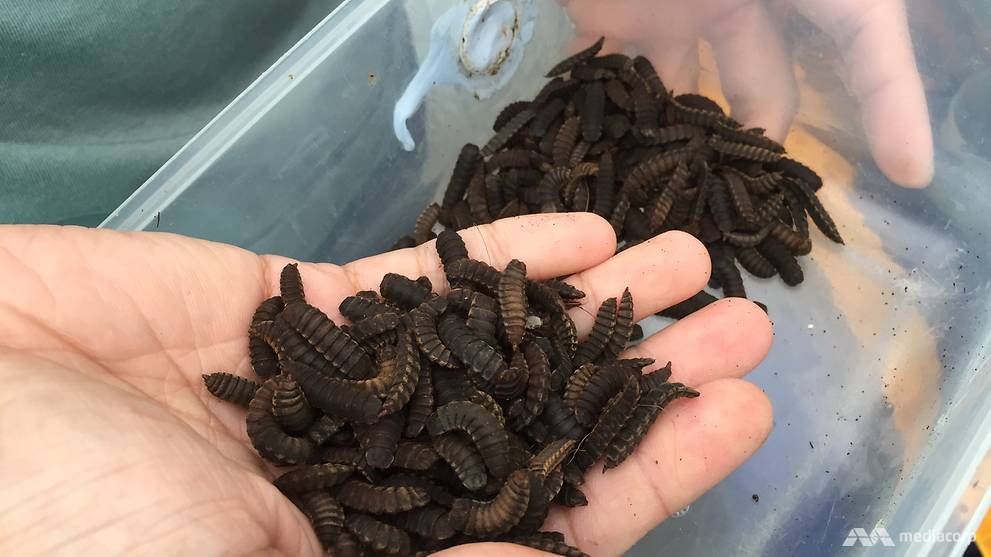 Apart from conducting corporate farm tours, it has also tasked itself with a social mission, by employing people with autism and Down's syndrome. It also plans to start an urban farming school in October.

"I think that the advancement of technology should not come at the expense of human capital," said Mr Ho. "We have to look at what our society is made up of first, look at what’s needed … and what we value around us, before we get too ahead of ourselves with technology.

"Same thing with our farm - we do want to see robotics and technology for agriculture advance, but never at the expense of human capital or our workforce," he said, citing an example of giving more dangerous jobs to robots instead of workers.

As more farmers find ways to balance the value of both technology and nature, the future of local farming looks bright.

Ms Wan is optimistic. "I hope to see children being able to see farms as how they’re supposed to be - animals that can see the light and breathe outdoor air, and also appreciate technology to increase productivity and automise land space," she said.

"If they're able to see both sides, they can better decide for themselves how to merge the two."\