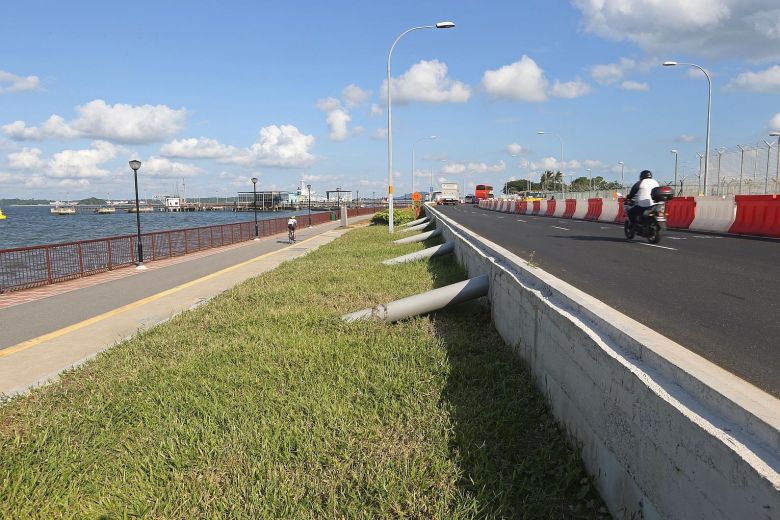 Singapore has already adopted various strategies to cope with coastal erosion and flooding as sea levels rise. In 2016, Singapore raised the coastal Nicoll Drive (above) in Changi by up to 0.8m.ST FILE PHOTO

Due to its position on the Equator, Singapore may be spared tropical cyclones that last year wreaked havoc in the northern hemisphere.

However, the island is vulnerable to another effect of climate change: rising sea levels, which cause coastal floods and erosion.

The country is taking steps to strengthen its defenses against this. An ongoing, first-of-its-kind study commissioned by the Building and Construction Authority (BCA) will form the national framework for coastal protection measures.

The authority did not provide details on what measures are being looked at under the study, but Singapore has already adopted various strategies to cope with coastal erosion and flooding as sea levels rise.

These include raising minimum land reclamation levels from 3m to 4m above mean sea level, and the installation of hard walls or stone embankments in at least 70 percent of Singapore's coastal areas.

The remaining coastal areas include sandy beaches, which can be used for recreation, and mangroves, which are natural buffers against erosion. These will be left as natural coastline, for now, said the BCA.

On the need for the study, a BCA spokesman said climate science is constantly evolving, and projections for sea level rise may change.

"Given this uncertainty, our national framework for coastal protection needs to be flexible and dynamic to be able to accommodate both future needs and the latest science," he said.

According to projections from Singapore's Second National Climate Change Study released in 2015, the mean sea level is estimated to rise by up to 1m by 2100.

The BCA study, undertaken by Surbana International Consultants and DHI Water and Environment, started in October 2013. The end date, slated for last year, has been pushed back to the second half of this year to consider fresh input and to engage stakeholders, so coastal protection strategies will complement development plans, the BCA spokesman told The Straits Times.

Mr Chong Kee Sen, immediate past president of The Institution of Engineers, Singapore, said a coastal adaptation study would likely include the identification of areas more prone to flooding from rising sea water levels.

This includes the installation of hard protective dikes to keep seawater away, or building critical infrastructure away from areas at risk of flooding, he added.

The study is just one of several being done to help Singapore better prepare for climate change.

Minister for the Environment and Water Resources Masagos Zulkifli told ST in an e-mail interview last month that agencies under the inter-agency Resilience Working Group have undertaken studies to better understand the impact of climate change on their respective areas of work and potential measures that could be implemented. This includes national water agency PUB's feasibility study on an underground drainage and reservoir system.

"These findings would help to guide our long-term plans for Singapore to adapt to future environmental changes."

United States President Donald Trump may have denounced climate change as a hoax, to the chagrin of climate scientists in the country.

But other countries have stepped up efforts to woo the scientists. The French government, for example, is offering grants to American climate scientists to live and continue their research in France.

Singapore, too, is reaching out to climate-change scientists.

Minister for the Environment and Water Resources Masagos Zulkifli told The Straits Times in an e-mail interview last month that the Centre for Climate Research Singapore "is growing its capabilities and welcomes collaborations and talented climate scientists who are interested and keen to work with us to deepen our understanding of tropical weather and climate".

The center was established in 2013 under the Meteorological Services Singapore, which is part of the National Environment Agency, to develop research expertise in the weather and climate of Singapore and the South-east Asian region.

"The science behind tropical climate systems is still fairly undeveloped and we see a lot of potential in the Centre for Climate Research Singapore to be a leading research center in this area," said Mr Masagos.

The World Meteorological Organization has also opened its regional office for Asia and the South-west Pacific in Singapore.

As the office is co-located with the Centre for Climate Research, the collaboration will deepen regional partnerships, Mr Masagos said.

"We also have international research and innovation hubs such as the Singapore-MIT Alliance for Research and Technology that will allow us to tap international experts in other areas of climate research," he said.

Under Singapore's Research Innovation and Enterprise 2020 plan - a blueprint guiding Singapore's research from 2016 to 2020 - $900 million in funding went to the Urban Solutions and Sustainability program to support piloting, test-bedding and accelerating adoption of promising new technologies.