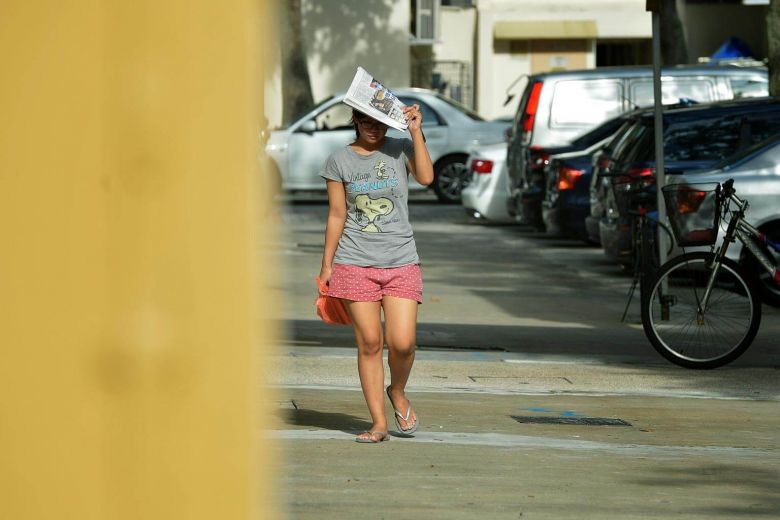 A woman using a newspaper to shade herself from the morning sun and sweltering heat at Yishun. PHOTO: ST FILE

As with the rest of the world, Singapore, too, will face more extreme conditions as the world warms, experts told The Sunday Times as recent weather events continue to wreak havoc in the northern hemisphere.

Hurricane Irma, one of the strongest storms ever recorded in the Atlantic, is hurtling its way through the Caribbean and will reach the Florida coastline today, where 5.6 million people have been ordered out of Irma's path. But in its wake, the hurricane has devastated communities and left at least 21 dead.

It follows tropical cyclones that have ripped across other parts of the world, such as Texas in the United States, Hong Kong and Macau. Last month, Typhoon Hato triggered Hong Kong's most severe typhoon 10 warning, and left at least 16 dead.

Singapore remains relatively insulated from such storms due to its location on the equator. "Tropical cyclones are very rare in our equatorial region as their formation requires a rotational force, which is not present along the equator," said a spokesman for the Meteorological Service Singapore (MSS).

But the island will not be spared extended dry spells and warm periods, as well as flash floods.

"The concerns for Singapore would be increased frequency of droughts and flash flooding, due to increased rainfall over the years," said Assistant Professor Winston Chow, a weather researcher at the National University of Singapore's (NUS) geography department.

MSS statistics show a trend of increasingly intense rainfall in Singapore. The annual maximum hourly rainfall was about 80mm in 1980. Last year, it rose to 90mm.

"The urban heat island effect and, increasingly, anthropogenic (human-induced) climate change, both contribute to higher temperatures in Singapore," said Dr Benjamin Grandey, a research scientist from the Centre for Environmental Sensing and Modeling at the Singapore-MIT Alliance for Research and Technology.

The urban heat island effect refers to how city temperatures are higher than in rural areas, because of more heat released from buildings, roads and vehicles.

Dr Erik Velasco, an air quality scientist, said the changing characteristics of meteorological events happening around the world point to climate change. He said: "The warming effect of greenhouse gases emitted by burning fossil fuels, agriculture and deforestation, in addition to the growing urbanisation and lack of mitigation measures in many places, are responsible for the catastrophic consequences of such weather events."

NUS' Prof Chow noted Singapore has taken steps to reduce the impact of flash floods, droughts and heat waves by improving drainage to reduce flood-prone areas, developing weather-proof technologies like desalination and Newater, and cooling the island by growing urban green spaces such as rooftop gardens.

To protect against rising sea levels, the minimum land reclamation level in Singapore was raised from 3m to 4m above the mean sea level.

Research is also being carried out to protect food supplies from the effects of extreme weather events.

Associate Professor Adam Switzer, academic associate chair at the Nanyang Technological University's Asian School of the Environment, said the impact of typhoons on rice yields is being studied to "better prepare the region for potential rice losses from typhoons, sea level rise and floods".