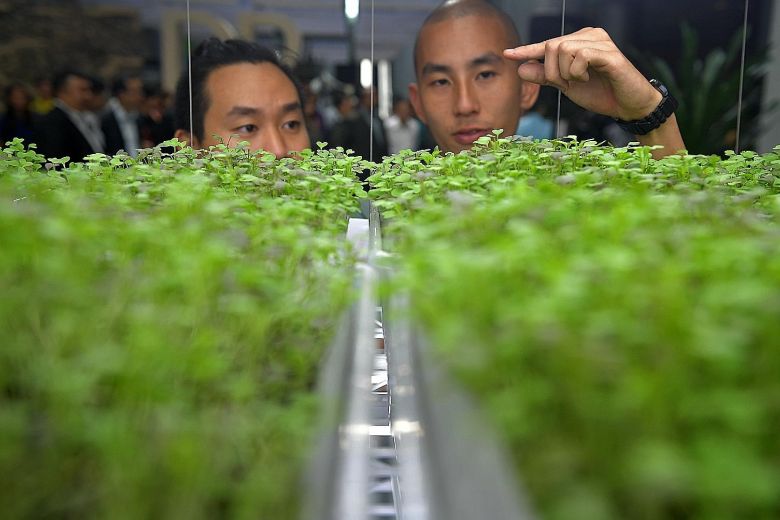 Oil rigs can do more than just drill for oil, going by the drawing of a monstrous polygonal floating structure that hatches fish, grows them, and processes and packages them all in one place.

The floating fish farm, being developed by the world's largest oil rig builder, Keppel Offshore and Marine, features extensive automation in the feeding, health-monitoring and cleaning of fish in both underwater and above-water facilities.

Although the design is still at the conceptual stage, it demonstrates how farming, an activity normally associated with manual labour and old-fashioned implements, can be engineered into a highly efficient and productive operation.

It is one of the next-generation farming concepts featured in the "Growing More with Less" exhibition launched yesterday at The URA Centre in Maxwell Road, organised by the Urban Redevelopment Authority (URA) in collaboration with the Agri-Food and Veterinary Authority and a number of commercial partners.

On show until Oct 31, it is the fifth in URA's Urban Lab exhibition series, which started in 2015.

Dr Koh Poh Koon, Senior Minister of State for National Development and Trade and Industry, who launched the exhibition, said the world needs to produce an increasing amount of food in an increasingly challenging environment affected by factors like urbanisation and climate change. On top of that, Singapore is faced with challenges like land scarcity and high labour costs.

"If our farmers can continue to take bold steps to innovate and push the envelope, Singapore will not only be able to strengthen our own food security, but also contribute to global food security by exporting food and farming technologies to help with other countries' food security needs," he added.

URA's acting group director of research and development Chiu Wen Tung said the new breed of farms would not only boost production but also create new jobs attractive to young people, as they would no longer require manual labour but involve working with control systems not much different from those in a high-tech production facility.

Among the other displays are a local "high-rise" seafood farming project by Apollo Aquaculture Group that produces six times more than a traditional fish farm, and a prototype building under construction in Sweden to grow vegetables in offices whereby people provide carbon dioxide for the plants, which in turn produce oxygen.

Another featured farm is Sustenir Agriculture, located in a Sembawang industrial building. It features many levels of vegetable-growing spaces, with precisely controlled lighting and other conditions that can grow vegetables in half the time of traditional farming, and with 95 per cent less water.

Its kale-growing room smacks of science fiction, with a lurid purple pink glow from the combination of red and blue LED lights optimal for the growth of that crop.

Not too long ago, Sustenir chief executive Benjamin Swan, 36, could not be further from being a farmer. He was an engineer and project manager involved in the development of Marina Bay Sands, and spent a few years helping two major banks in Singapore revamp their banking systems.

But one evening in 2012, he was on the MRT when he read an article posted on Facebook about vertical farming, and it set off a "light bulb".

Mr Swan, an Australian applying for permanent residency here, designed his new farm on the computer that very night, in 3D.

He teamed up with his friend Martin Lavoo, who let his home's basement be used as a research lab.

"Not having an agricultural background allowed us to think out of the box and discover new frontiers," said Mr Swan.