Anti-waste group kicks off a campaign to incentivise Singaporean consumers to bring their own cups, bottles, bags and containers, and so cut down on plastic use. 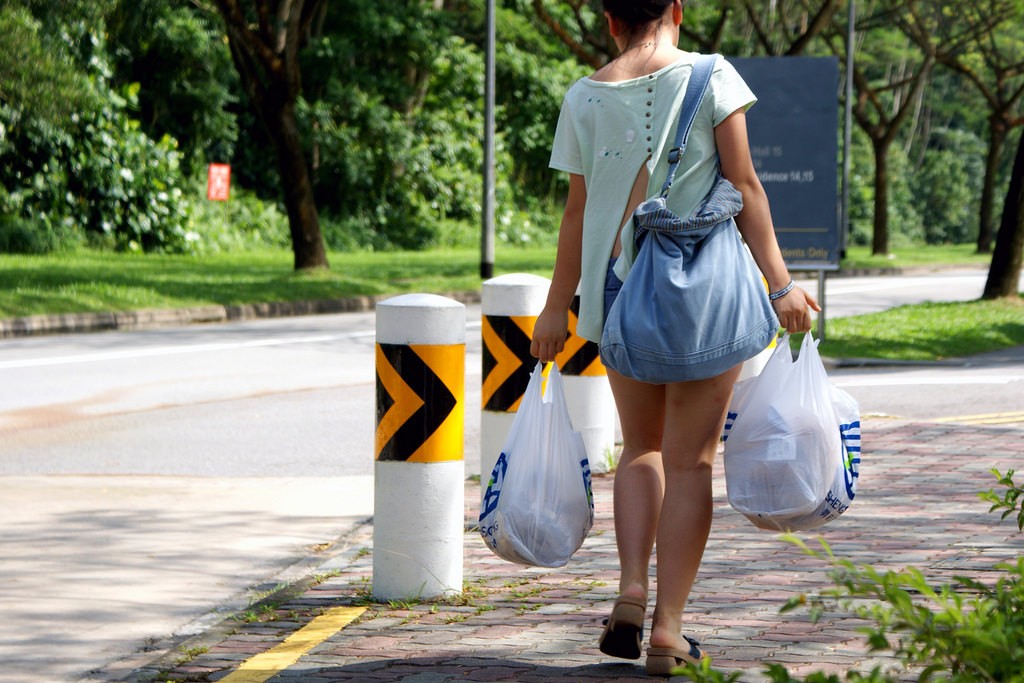 A woman carries her groceries home in plastic bags. Singapore threw away 822,000 tonnes of plastic last year, of which only seven per cent was recycled. Image: teddy-rised, CC BY-NC-ND 2.0

Coffee drinkers in Singapore might find that their morning brew tastes a little bit sweeter from now on, as a number of local cafes have started offering discounts to customers who bring their own cups as part of a waste-reduction campaign.

The BYO—which stands for ‘bring your own’—campaign calls on Singaporeans to bring their own bags and containers when buying food and drinks, with the aim of cutting down on the amount of discarded take-away plastic.

Singapore threw away 822,000 tonnes of plastic last year, out of which only seven per cent was recycled, according to data from the National Environment Agency.

Although plastic can be easily recycled, there is little financial incentive to do so because the material is easily contaminated, lightweight and has low market value, said Eugene Tay, executive director of anti-waste group Zero Waste SG, which organised the campaign. “If you can’t depend on recycling, we have to go upstream and reduce it at the source: the plastic disposables that we use each day,” he said at the launch event.

The campaign follows the release of the NGO’s Position Paper on the Reduction of Single-Use Plastic Disposables in Singapore last year suggesting incentives be used to discourage plastic consumption, as well as a recommendation paper urging Singapore to implement a fee on plastic bags to discourage their use.

Plastic poses a major environmental threat, with a monstrous 8 million tonnes entering the oceans each year where it endangers marine ecosystems, according to UN Environment Programme estimates.

Singapore disposes of plastics by incinerating them in waste-to-energy plants where trash is used to generate energy. But this destroys the resources that go into plastic production, and also produces carbon dioxide, which contributes to climate change. 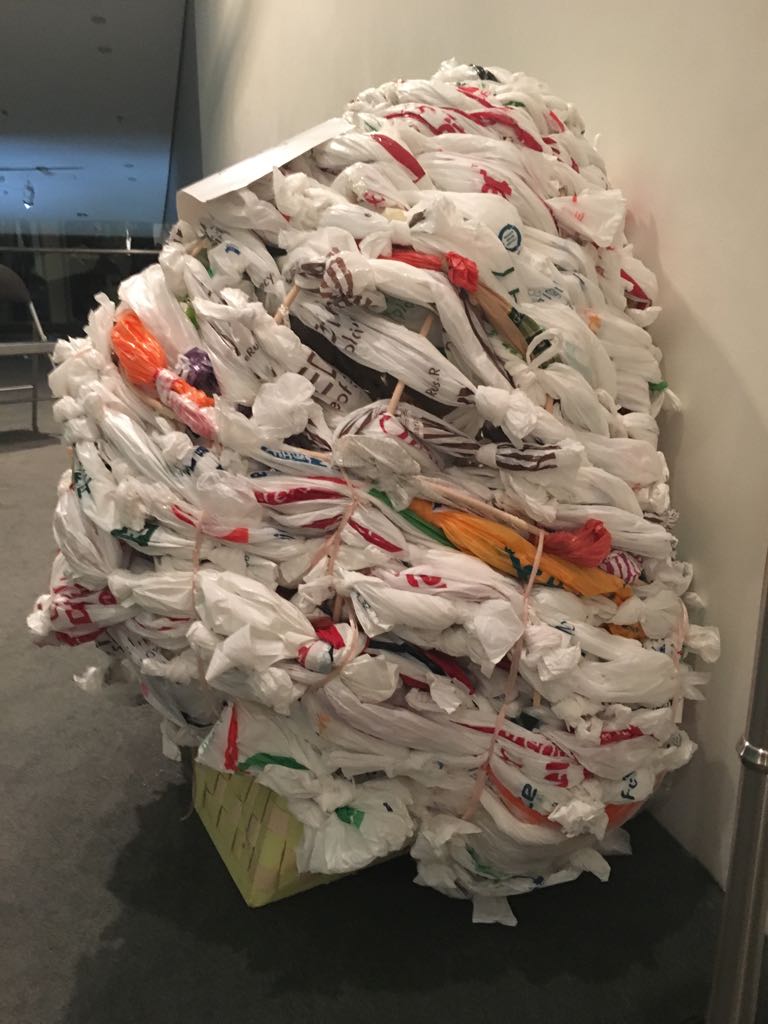 A sculpture made out of the number of plastic bags an average Singaporean uses annually - 450. Image: Eco-Business

BYO Singapore will run from 1 September to 31 December, 2017. So far, 14 businesses—operating a total of 223 retail outlets—are offering discounts or extra food to consumers who bring their own bottles, cups, bags or containers.

The 14 include Singapore’s largest supermarket chain NTUC FairPrice, which has been offering a 10-cent rebate for customers who bring their own bags since 2007, as well as cafe chain Joe & Dough and salad shop Happy Salad.

NTUC FairPrice’s director of corporate communications and brand, Jonas Kor, told Eco-Business that it is heartening to see more organisations committing to sustainable practices. Asked why NTUC had decided to join the campaign, he replied that the supermarket chain wants to “support and be part of this larger movement to take a stance on reducing plastic bag waste”.

Zero Waste SG had approached 200 retailers to join the campaign, but many were deterred by the perceived costs and operational challenges involved, Tay told Eco-Business at the launch. The campaign goal is to sign on 500 retail outlets and save 1 million pieces of disposables this year.

The NGO will hold roadshows in business centres such as the central business district, reach out to residents in the community with the aid of popular author Neil Humphreys, and help companies foster BYO habits among its employees. This includes having a space for them to keep and wash their reusable containers, said Tay.

A spokesperson from the National Environment Agency said it was “encouraged” by ground-up efforts from groups like Zero Waste SG. It co-funds BYO Singapore through the Call for Ideas Fund, which supports initiatives that seek to resolve environmental challenges in the community.

Ironically, Tay commented that incentives were perhaps not the best way to change the behaviour of Singaporeans, when it comes to the use of non-disposables.

He added: “But we can do our part from the ground up through voluntary incentives, so that we don’t have to wait for the government. We can do it ourselves.”