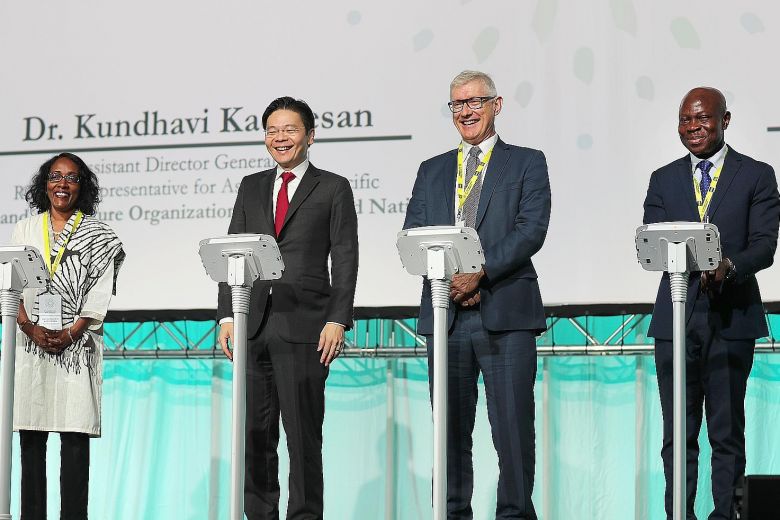 The production of rice, one of the world's most important crops, is facing major problems such as slow growth and climate change, which could increase its price by more than 30 percent by 2050.

"We need major changes to our rice and food production systems to make them more resilient to weather disruptions, and also to reduce their emissions and their impact on the environment," Minister for National Development Lawrence Wong said yesterday.

Speaking at the opening of the International Rice Congress, he said that although Singapore is a rice consumer instead of a producer, the country has turned its limited land space to its advantage by experimenting with more productive farming methods.

"After all, necessity is the mother of invention," said Mr Wong, who is also Second Minister for Finance, citing examples of urban farming producing more rice with less land.

The congress, also called the "Olympics of Rice Science", is the world's largest scientific conference on rice. Held every four years, it is in Singapore for the first time.

This year's conference, organized by the International Rice Research Institute (Irri) and Agri-Food and Veterinary Authority, brings together 1,500 participants from 40 countries, including scientists, government officials and representatives from international bodies like the United Nations' Food and Agriculture Organisation (FAO).

Among the announcement, yesterday was a four-year partnership between Irri andCortevaAgriscience, the agricultural arm of chemical giant DowDuPont, which aims to improve global rice production and quality.

According to the two bodies, rice production needs to dramatically increase by 25 percent over the next 25 years to meet the growing demands of the world's population.

Both organizations will draw on each other's scientific strengths to breed rice that will overcome looming challenges of climate change and decreased rice productivity.

Corteva, for instance, has access to seven million farmers in South and Southeast Asia through its educational and outreach schemes, while Irri has expertise in rice genetics.

Irri director-general Matthew Morell said Singapore's importance to international trade made it a natural choice for this year's conference: "While agriculture plays a limited role in the economy of Singapore, the country is a significant logistics and shipping hub for rice trade. In addition, its robust financial market and reputation for regulatory rigor positions it as an ideal location for a rice futures market that can help ensure the availability and affordability of rice worldwide."

Ms Kundhavi Kadiresan, FAO assistant director-general and regional representative for Asia and the Pacific, said: "The world is changing rapidly, and the future world rice economy will look much different than it does today. Diets are changing towards fish, meat, fruits, and vegetables, although rice will remain the foundation of Asian diets, especially for the poor."

Mr Wong said everyone needs to come together to overcome the vast challenges facing rice's future.

"Agriculture can and must be part of the solution to tackling climate change. We must intensify our research, enterprise, and collaboration efforts to transform rice and agricultural production methods."

The congress, held at Marina Bay Sands, runs until tomorrow.