Leading the charge on the green battlefield

Cities are the battlefields of climate change. Without education or dedication to change, mankind might find itself on the losing side, warns WGBC's Board of Directors chair Tai Lee Siang. 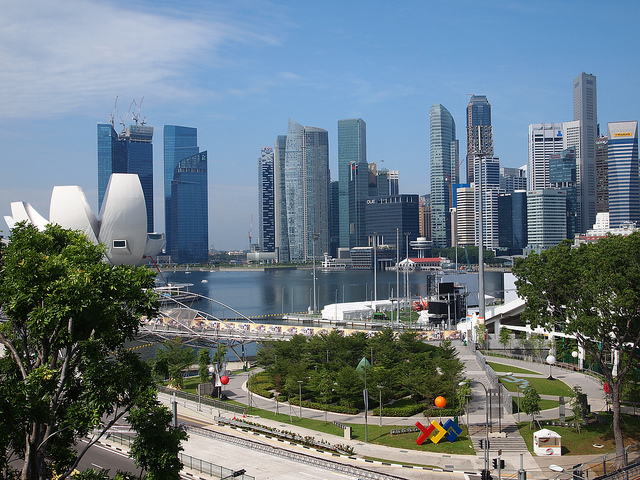 The Garden City. Singapore’s sustainability approach grew together with nation-building and encompasses influencing building industry and effecting lifestyle change among its citizens. Image: janebelindasmith, CC BY 2.0

Cities in Asia are undergoing a period of rapid growth as businesses and people flock to these economic centres throughout the region. One consequence of this is haphazard planning as nations seek to accommodate new inflows with new cities built from scratch.

Ensuring cities in Asia are more sustainable and able to mitigate climate change is a difficult task, but Singapore has ideas that can be shared with its neighbours, says Tai Lee Siang, group managing director of architecture company Ong&Ong Group and the first Asian chair of the Board of Directors at the World Green Building Council (WGBC).

In an e-mail interview with Climate Challenge, Tai notes that Asia’s cities have grown rapidly and “haphazardly” in the last two to three decades that gave rise to a host of urban problems like traffic congestion and poor infrastructure, problems which have been further exacerbated by population growth.

“In the process of accommodating growth, sustainability is often neglected,” he says. The veteran architect and planner was elected to the top post in the WGBC in June and, in comments to the press after his appointment, said he wanted to advance “the transformation of Asian cities towards more sustainable and liveable models which can be replicated in other global cities”.

The relationship between cities and climate change has been a straightforward one, with buildings responsible for 40 per cent of global energy use and one-third of greenhouse gas emissions, according to the United Nations Environment Programme’s Sustainable Buildings and Climate Initiative. In the long run, cities can become victims of the effects of climate change that they themselves have brought about through the failure to adopt more efficient and greener policies and technologies.

To start implementing more sustainable ways for living for its people and the environment, Asian authorities should address the existing problems with current cities rather than start afresh with new, smart cities, he says.

Tai calls for stricter regulation for buildings that do not meet today’s green standards to be retrofitted in order to solve not just the problem of energy efficiency, but also ‘sick building syndrome’ and over congestion.

Local history and culture should also be preserved when greening cities. Tai notes that traditional architecture, such as the Chinese courtyard house, is usually the result of design for natural ventilation and daylight.

Keeping these buildings thus reduces the need for constructing new buildings and air-conditioning, which in turn cuts back on emissions and fights climate change.

Singapore has been an achiever in the field of energy-efficient buildings. We are ranked second in corporate strategy consultant Solidiance’s The Top 10 Global Cities for Green Buildings 2016 white paper, just behind Paris but ahead of London.

Tai says that Singapore “started the sustainability journey right from the start of nation building” through successful public housing, the Garden City concept and clean water policies, all of which provided a good foundation for further sustainability strategies.

“I have always advised other countries to take a holistic approach to greening to include influencing the building industry and effecting lifestyle change — the Singapore way,” he remarks.

He cites the example of how Singapore's Building and Construction Authority (BCA) is pushing to green 80 per cent of Singapore’s buildings by 2030 under its second Green Building Masterplan, released in 2009.

The greening of Singapore’s buildings is a key component of Singapore’s Climate Action Plan which, among others, seeks to reduce its greenhouse gas emissions per GDP dollar by 36 per cent from 2005 levels by 2030.

Tai explains that on the building front, the BCA constantly works with the construction industry to ensure that buildings achieve better sustainable performance beyond that of building codes, while in terms of changing perspectives, there are plans to “engage and educate end-users to drive up demand and value for green buildings”.

“This two-prong approach will help accelerate the realisation of the green building masterplan, and plays a part in mitigating climate change,” explains Tai. It also shows the importance of public and private sector collaboration, he adds.

Asked what lessons the Singapore case study can provide to other countries that have different circumstances, Tai replies: “What Singapore has proven is that space limitations and high cost are not a constraint to greening. In many countries where there is abundant land and resource, it is important to establish the right sustainability framework from the beginning.”

But even Singapore has some way to go when it comes to greening the built environment.

A major obstacle Tai sees in the greening of buildings is a lack of understanding about climate change and the threat it poses.

Tai is therefore making it his job to target large corporations and the young, and informing them about climate change and the host of dangers it presents. The former has the clout to accelerate change within the industry, while the latter can bring “avalanche change to societies” if they are internalise the value of sustainability.

While business owners and land developers all around the world are starting to see the business case for sustainability as it is, Tai emphasises that the push for greener buildings “has to go beyond economics and hit straight at the social consciousness”.

Eventually, Tai wants to see in Singapore better awareness of climate change across all generations and residents, which is likely to translate into “more ground-up efforts to green Singapore without persuasion or rules”.

In his manifesto as chair of the WGBC's Board of Directors, Tai called cities the main battleground of climate change, with government policies a heavyweight player.

Governments need to commit to shaking up traditional ways of doing things and adopt new paradigms to achieve emissions cuts, he said, quoting the example of car-centric road planning as a modus operandi that must be displaced in favour of public transport-friendly policies and incentives.

“All these point to (society having) intensive engagement, alignment and agreement with the governments on the big-picture-first approach instead of self-interests. Strong leadership from government is very necessary,” he says.

When asked for a city which Singapore could learn from as a model for green-ness, Tai says Vancouver's ambitious Greenest City Action Plan, which has a set of measurable 2020 target for areas like zero carbon, provides food for thought.

“One of the most successful aspects of the implementation is the ground-up initiatives and public engagement by the government. The overwhelming response from the citizens in playing a part in the city’s plan has resulted in a web-portal called ‘Greenest City Stories’ hosted by the City of Vancouver. This is something I feel Singapore can emulate,” he says.