In the face of climate change can our engineers keep the trains running on time? 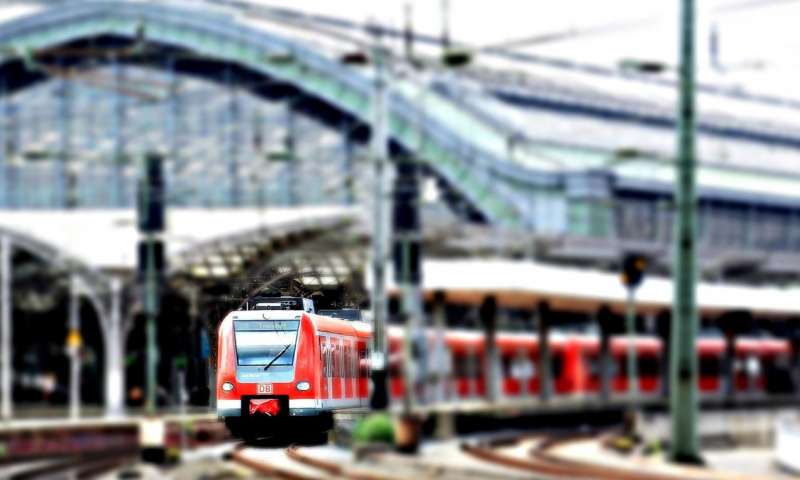 Physicist Michio Kaku once said, "What we usually consider as impossible are simply engineering problems... there's no law of physics preventing them." And so it has been with railway and metro bridges that span waterways. The city of Washington, D.C., is bounded on two sides by rivers and an untold number of streams. Every morning the Orange Line, one of six train lines that serve the city, ferries 12,060 commuters—per hour. And this miracle occurs every day in Berlin, Tokyo, London, Amsterdam, Shanghai, and numerous other metropolitan areas. In the United Kingdom alone there are more than 40,000 railway bridges.

Much has been written on how to maintain this infrastructure, particularly in the difficult transition zones where trains leave land to ascend bridges over water. "All railway systems suffer rapid track deterioration at the transition zones requiring high maintenance costs," said Sakdirat Kaewunruen, Ph.D., Department of Civil Engineering, University of Birmingham, United Kingdom. "In the past decades, there have been so many ad hoc solutions provided, but there has been no work on evaluating its life cycle cost and sustainability."

Each nation has employed its own methodology for maintenance and repairs, but new, daunting challenges created by climate change—extreme heat, extreme cold, and severe flooding—require yet more rigorous solutions.

An unprecedented study titled, "Lifecycle Assessments of Railway Bridge Transitions Exposed to Extreme Events," published in Frontiers in Built Environment, benchmarks the costs and carbon emissions for the life cycle of eight mitigation measures and reviews these methods for their effectiveness in three types of extreme environmental conditions.

Railway systems are designed for a 50-year lifespan, which is calculated on the integrity of the materials used, and most railways are built along one of two common track systems: rails set on railway ties (U.S.A.) or sleepers (UK), which are then 'ballasted' into beds of rock or gravel; or rails that are set onto concrete slabs. Sometimes both are used on one rail line with one transiting to the other. In either case, the engineering feat that must be solved is that as the train crosses the transition between ground and bridge, the relative stiffness of the bedrock, concrete, vs. metal bridge can impart intense vibrations that drastically impact the train rails and even make the ride uncomfortable to commuters. Transition zones require four to eight times more maintenance than ordinary rail tracks.

The study investigates mitigation measures for bridges that span 30 meters and 100 meters. The study reviews the eight most common techniques for bridge transitions, including: under ballast mats (UBMs), soft baseplates, under sleeper pads (USPs), rail pads, embankment treatments, transition slabs, ballast bonding, and wide sleepers. Overall, the study finds that elastic rail pads, soft baseplates, and UBMS are most suitable for short-span bridges, relying on a range of materials such as elastic materials, chloroprene rubber, or polymeric compounds to provide reduce railway stiffness. Unfortunately, the same materials that provide elasticity deteriorate faster in extreme heat and extreme cold, conditions that have become more frequent with climate change. For reference, the materials tend to exhibit sensitivity at 20 degrees C and severe problems in the dead of winter at -40 degrees C in the far northern latitudes.

For long bridges the authors recommended employing transition slabs, ballast bonding, and embankment treatments—methods that mitigate track stiffness gradually with longer transitions. These solutions tend to be greatly affected by flash flooding that can wash away embankments and ballast that supports the track structure. In some areas of Norway flooding has turned sediments into mud causing train tracks to collapse.

"Global warming and climate change... increase the renewal and wear rates of lubrication materials, as well as the possibility of track twisting and buckling," said Kaewunruen in an earlier paper with Lei Wu, who is currently working on the Kuala Lumpur-Singapore High Speed Railway.

In this study, the authors provide engineering assumptions and sample calculations for their recommendations, but also stress that solutions need to be developed on a case-by-case basis, taking into account cost over the life cycle, environmental factors, and the impact high maintenance can have on the carbon footprint. Furthermore, cost of materials and of maintenance can range widely from country to country.

"Climate change is a significant issue for every industry in the world," said Kaewunruen. "Next we will analyze scenarios with multiple hazards. We have been informed that some events may come together, for example an earthquake at the same time as extreme heat, or extreme wind at the same time as extreme rainfall or runoff. Bridges respond to different events individually, but when you have multiple hazards simultaneously they can suffer even greater impacts."