Everyone can be ‘Captain Planet’, as 2018 is earmarked Year of Climate Action 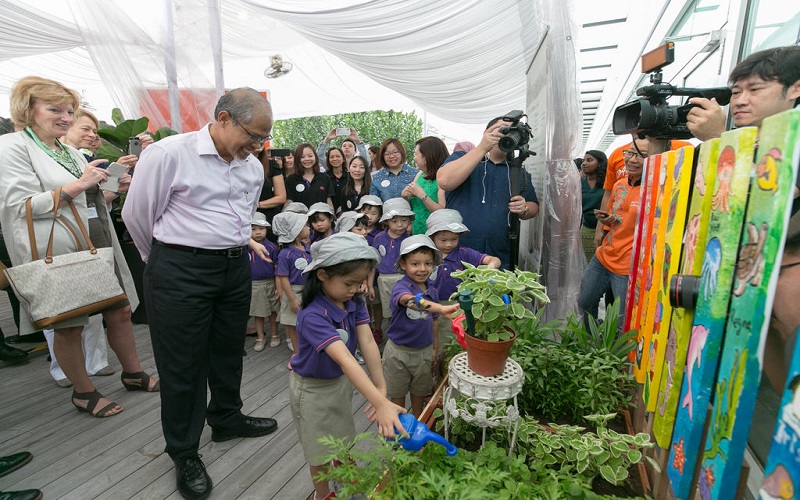 From monitoring paper usage in schools, setting up recycling corners at the workplace, to using reusable shopping bags, educational institutions, organizations, and individuals can now pledge to commit to activities to tackle climate change.

As chair of the Association of South-east Asian Nations (ASEAN) this year, Singapore will also host a special ministerial meeting on climate change in July, announced Minister for the Environment and Water Resources Masagos Zulkifli on Friday (Jan 26).

Speaking at the launch event for the Year of Climate Action held at the Singapore Sustainability Academy, Mr Masagos said Singapore’s journey to fight climate change is already “well-embedded” in its development policies. But it is just as important to raise the level of national consciousness, of the need for individual and collective action to fight climate change.

He said: “(It is) simply because the Government cannot do it alone. This is a year when we will join forces with all of you here, plus many other parties across Singapore and beyond, to rally everybody to take action to reduce our carbon footprint and fight climate change.”

On why this year was specifically designated as the Year of Climate Action, Mr Masagos said climate change poses an existential threat. Rising sea levels and weather extremes, such as droughts and flash floods from intense rainfall, can have devastating consequences on lives and businesses.

Singapore is already feeling the heat from global warming and urbanization, as last year was the warmest year on record that was not influenced by an El Nino event. The El Nino phenomenon leads to drier and warmer conditions, particularly between June and October across South-east Asia.

Mr Masagos also launched the Climate Action Pledge on Friday, where individuals, organisationsand educational institutions can make a public declaration through the ministry’s website to show their readiness to take climate action, and influence others to do the same.

Individuals can pick from a list of actions to commit to, such as bringing their own reusable shopping bag, avoid using a straw, and setting their air-conditioner at 25 deg celsius. Organisations and educational institutions can also share their pledges, which can involve setting up recycling corners, switching off the lights after use, among other things.

There were more than 200 pledges as of Friday morning and Mr Masagos urged more Singaporeans and organizations to do so. More than half of these pledges came from corporations, and of those, about half were Small and Medium Enterprises.

“It is a positive action and will help us push forward collectively during this Year of Climate Action,” he added.

They can use the new red Climate Action logo, which incorporates the Singapore skyline, to brand their sustainability activities and events, as well as use the hashtag #ClimateActionSG for their social media posts.

With Singapore assuming the ASEAN chairmanship this year, Mr Masagos said the authorities look forward to leading discussions on climate action. A Special ASEAN Ministerial Meeting on Climate Change will be held on July 10, and it will be an important meeting for Asean to “show leadership on climate action”, he said.

There will also be back-to-back expanded meetings between ASEAN and ministers from China, Japan, and South Korea, as well as the United Nations Framework Convention on Climate Change Conference of Parties’ respective president and president-designate, Fiji and Poland.

The Year of Climate Action also supports the 2030 Development Agenda, a long term global development framework with a set of 17 goals, noted the minister. Singapore will be working with countries around the world to build capacity and help them achieve these goals.

Some companies here have already gotten a headstart when it comes to tackling climate change. In the last six years, property developer City Developments Limited, which has been doing its part to protect the environment since 1995, saved more than S$19 million from its energyefficient retrofitting and initiatives in eight of its office buildings. Local telco Singtel also has carbon reductiontargets, and is committed to transparent disclosure of its climate-related risks.