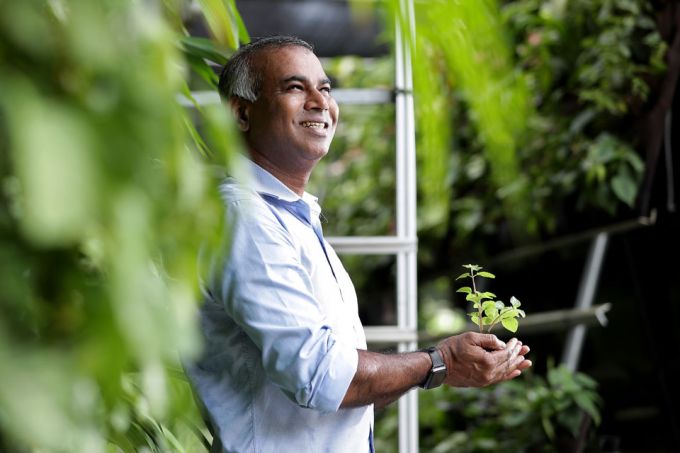 "Employers are starting to recognise the benefits of having greenery in work spaces," says Mr Veera, who set up Greenology in 2008, during the financial crisis . PHOTO: KELVIN CHNG

To some, having "green fingers" is seen as a gift. But what about having a way with plants, and being able to run a successful business?

Veera Sekaran, 55, has both. He is the founder and managing director of Greenology, a company specialising in urban greenery. Greenology has about 39 employees, including foreign workers.

When Mr Veera first mooted the idea of providing "green walls", better known as vertical gardens, many people advised him against doing it.

Greenology was set up in 2008, during the financial crisis.

"Many people told me nobody would want to have a vertical garden because it is considered a luxury, and it was in the middle of a financial crisis then," he says.

But his love for plants pushed him on despite the tough circumstances.

He was bootstrapping, and owed more than S$300,000 in debt. He went without a salary for two to three years.

But when business started to pick up in 2012, Mr Veera's health went downhill. He contracted a rare disease that affected his nerves, resulting in both his arms being paralysed. Doctors told him that chances of recovery were very low.

Mr Veera recounts: "But I didn't want to give up. I found a lot of resilience in the way plants grew in difficult situations. If the plants can do it, why can't I? People run away from problems, but plants can't. If they are put in a difficult situation, either they survive or they die. All things being equal, then I think I should be better than a plant."

Thankfully, his condition improved and he regained the use of his arms, and business became easier.

From 2010 up to now, Greenology has completed over 350 Singapore-based projects across commercial and residential spaces totalling more than 18,000 square metres of vertical area.

It also serves a wide base of clients, ranging from property developers, businesses big and small, and home-owners.

The cost of a green wall can go up to S$650 per square metre, and varies according to complexity and scale of project. It comes with an auto-irrigation and fertigation system.

Clients can choose the types of plants on the wall, depending on the site conditions. For example, plants can be mounted densely on a wall, or hung on a cable system, which allows for light and wind to pass through.

After an order is placed, it takes about eight weeks for the foliage to increase sufficiently before the structure is installed.

Mr Veera also strongly believes that demand for urban greenery will always be present. He says: "Initially, it was seen as a luxury. But now, sentiments have changed. There's all the talk about climate change and protecting the environment. Because the psyche changed, business picked up.

"Employers are also starting to recognise the benefits of having greenery in work spaces. Some people find it therapeutic.

"Even in HDB flats, people want plants in their balconies and their homes, sometimes they want to grow their own vegetables. People can also enjoy the comfort of the garden despite space constraints."

But having a green wall at home also comes with various concerns.

Clients usually ask about maintainance, and how to make sure the plants are growing healthily, similar to having a garden.

Instead of using soil, Greenology makes its own media on which the plants grow - bacteria-free and less likely to attract insects and parasites.

Now, providing "green walls" is only one part of the business.

To differentiate itself from competitors and in line with changing needs, Greenology has also gone into "green technology", which is the use of technology in urban greening.

"We are constantly innovating. People want a fuss-free system that allows them to appreciate nature. So we have incorporated technology to make it easier for them to maintain the plants.

"We are working on an irrigation system to be controlled via cloud access, or wifi-controlled, or owners can be notified if the water supply is turned off. Remote sensors can also be put on the green walls to detect light and other conditions such as soil moisture and nutrient level."

In areas with low light sensitivity, "grow lights" can be installed to aid plant's growth.

Greenology currently exports its products to countries such as Malaysia, Australia and Indonesia. It is looking to expand into another country by next year.

Although investors have expressed interest in Greenology, Mr Veera has not taken up any offers. "I'm still exploring my options. Even if I divest, the first divestment will go to my staff."

One of Mr Veera's challenges now is recruiting young blood. He says: "When people think of nature, they usually stay away because they think working with nature means a low-paying job. But if you bring in the technology and let them see the benefits that nature brings to people, it is a lot more appealing.

"The interest needs to evolve in the youngsters so they can carry on the business."