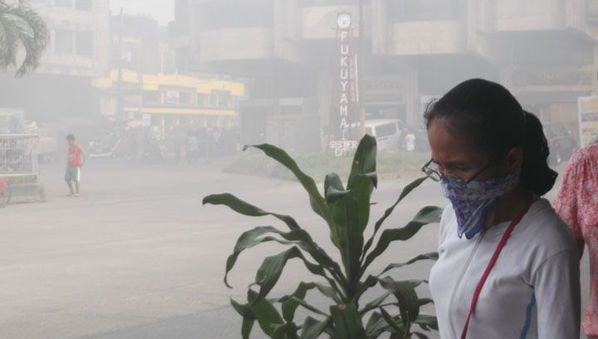 [MANILA] The Philippines is on high alert as a thickening haze from Indonesian forest fires has reached its southern and central islands, causing flight cancellations and health warnings.

Weather officials say monsoon winds, combined with wind patterns created by Typhoon Koppu, which recently hammered the northern island of Luzon, could be causing the “smaze” – smoke and haze -- to drift from Indonesia to the Philippines 1,200 kilometres away.

The health department has advised residents in affected areas to wear face masks to prevent inhalation of air particles that can cause respiratory problems. Philippine airports in the southern island of Mindanao and in the central region, the Visayas, were forced to shut down for six days because of poor visibility.

The whole South-East Asian region is experiencing the worst haze problems since 1997, when El Niño also hit the region, prompting calls for tougher policies and a regional solution to put an end once and for to slash-and-burn practices damaging people’s health and the environment.

The haze is caused by the illegal burning of forest land for oil palm and pulp plantations in Kalimantan and Sumatra, inducing air pollution not only in Indonesia but neighbouring Singapore, Malaysia, Brunei and now in the Philippines, too.

Southern Philippine cities began reporting smog around mid-September. By mid-October, southern and central Philippines and southern Thailand were blanketed by smog, which has not happened in previous years. Cambodia and Vietnam have also been affected.

This year’s strong El Niño has compounded the problem because the dry weather encourages the outbreak of more fires.

“The persistence of the haze will depend on many things, including weather patterns, but will ultimately be determined by the response of the government and the companies and communities that manage land,” says Susan Minnemeyer, geographic information systems manager at the World Resources Institute.

She stresses that unless there is strong enforcement against those who burn land and hold them accountable, the fires and haze will continue whenever the weather is dry enough.

“The government should prioritise efforts to prevent fires in the first place through sustained engagement with local farmers and local governments to address conflicts over land,” she adds.

Herry Purnomo, senior scientist at the Center for International Forestry Research based in Bogor, Indonesia, says the impact of this year’s haze is even worse than in 1997 when an El Niño ignited forest fires.

“The ecosystem resilience today is not as good as in 1997. Deforestation and forest degradation have reduced the adaptive capacity of the ecosystem and local communities to human-made and natural disasters,” Purnomo notes.

Apart from firefighting and cloud seeding to control forest fires, Indonesia has been stepping up its enforcement. Last month, police arrested seven executives of paper pulp and palm oil companies who were allegedly connected with illegal forest fires that caused the haze.

Singaporean foreign affairs minister K. Shanmugam also called on other governments in the region to play their part.