What does it mean to go on strike for the climate?

Responding to the leaders' lack of action on the climate crisis, voices of the youth are slowly amplified through the global climate strike 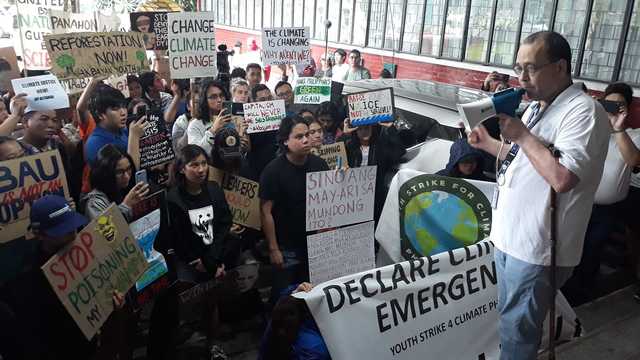 HEAR THE YOUTH. Chito Gascon speaks in front of youth members during the global climate strike at the Commission on Human Rights on September 20. Photo by John Algo/Climate Action for Sustainability Initiative (KASALI)

MANILA, Philippines – You could hear a pin drop at the plaza in front of the Commission on Human Rights (CHR). When I arrived, there was nothing but silence. Then, they came. First, a single voice through the megaphone; then, it echoed louder. The hand-made signs came in one by one, held by college students walking side by side. It was a Friday and they were not in school. They are on strike.

When you go to a rally, you expect to be greeted by angry faces and pulsating negativity enough to attract lightning. Before that day, I thought striking was only for people privileged with time. But on Friday, September 20, a friendly face approached me and welcomed me to the group. He also congratulated me for being on my first strike.

He is Jefferson Estela, a co-founder of the Youth Strike for Climate Philippines, comprised of college students and young professionals inspired by 16-year-old Greta Thunberg and her protests for climate action. The group first rallied for climate justice in streets around the Philippines on March 14.

On September 20, Youth Strike for Climate Philippines joined millions of climate advocates worldwide to march again for the health of our planet. (READ: LIST: Mobilizations for 2019 Philippine climate strike)

Jefferson shared how his group tried to get the endorsement of government agencies amidst the bustle of the global movement. Not all agencies gave their official endorsement but this did not stop the group from marching.

Across the park, I saw more youth and children arrive with their supportive parents and siblings who chose to let their voices be heard. Coming from Quezon City to Alabang, they understood that they were privileged not to feel the effects of climate change as severely as those in vulnerable communities and indigenous peoples. The strike is a necessity to them.

When the vulnerable sectors of our society are faced by imminent danger, it is out of place to call standing up for our homes and our future a privilege. The youth shouted at the top of their lungs as they raised and put their phones on full blast, sounding the alarm for climate justice. (READ: [OPINION] Why the Philippines should declare a climate emergency)

Rain started to pour during our strike. In the midst of a crowd, I saw two little girls donned in their yellow and blue raincoats. They did not take shelter. They were not afraid of the rain.

Instead, they danced and shouted with everyone, “What do we want? Climate justice! When do we want it? Now!”

CHR Chairman Chito Gascon stepped outside his office and spoke in solidarity with the youth strikers. He said that the youth play a crucial role in demanding climate justice.

(Why are we the ones who need to act all the time? We are not the ones who are destroying the environment but we are the first to feel the severe effects of climate change?)

Paredes' experience with indigenous peoples made her realize that climate change is not just about extreme weather conditions, it is also about compassion.

And that is when it really hit me. When the communities that we should be responsible for are cast aside in the name of progress, the future of the youth teeters on the edge. When we deprive the vulnerable sectors of the cornerstone of a sustainable and livable environment, we will fall. What will be the point of our great cities, bustling economy, and the promise of a bright future then?

On my way home later that evening, I asked a jeepney driver, “Kuya, may nabalitaan ba kayong strike ng mga kabataan kaninang hapon para sa environment (Did you hear the news that teenagers held a strike this afternoon for the environment)?"

He said he did not, and I wondered if he ever will.

The strike made me feel exhilarated and positive that taking actions like this would make a difference. As I looked back at the youth strikers still shouting for climate justice along Commonwealth Avenue, my heart broke.

As positive as an experience of going on strike for the climate is, I hoped the youth would finally be heard so they would not have to go out and do it again.