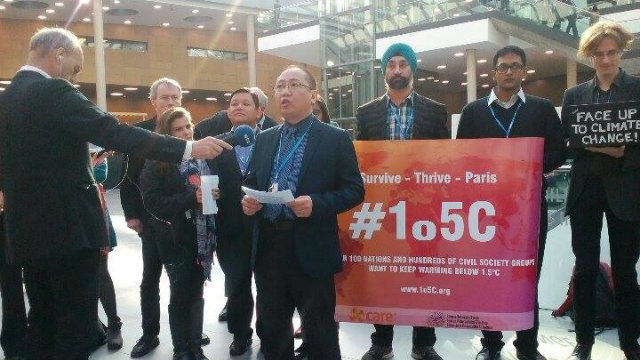 BONN, Germany – The last day of climate negotiations was met with protests as vulnerable countries called for climate justice and a more ambitious target of keeping global warming under a 1.5ºC limit.

The 2009 Conference of Parties (COP) in Copenhagen failed to have a climate agreement, but the following COP in Cancun then resulted to a long term goal of achieving a 2ºC limit.

Scientific studies, however, say that 2ºC warming is already highly dangerous. A study – led by climate scientist James Hansen, alongside 16 other scientists – said that 2 degrees of warming could cause a sea level rise that could turn most of the world’s coastal cities uninhabitable.

Currently, the world has already warmed by 0.8ºC from pre-industrial levels. We have seen more catastrophic events in the past few years. Typhoon Yolanda (Haiyan) claimed more than 6,000 lives in the Philippines in 2013. The India heat wave earlier this year caused over 2,500 deaths. Small island states such as Marshall Islands and Tuvalu have been looking for land abroad since their islands have started sinking.

Vulnerable countries have long called for a more ambitious target of 1.5ºC, but developed countries are still having difficulties agreeing.

According to the UN Refugee Agency (UNHCR), one person is displaced by disasters every second. In the Philippines, Typhoon Lando (Koppu) displaced 23,000 people.

“We need to aspire to limit warming to a strict minimum to safeguard communities and the world,” said Climate Change Commissioner Emmanuel de Guzman, negotiator and head of delegation from the Philippines.

“Less than one degree of warming has already triggered scores of dangerous and unmanageable impacts. Raising ambition is a question of survival,” De Guzman added.

In a press conference, G77 and China said that for developing countries, climate change is a matter of “life and death.”

Adaptation and loss and damage have also been a tough fight for developing countries in the negotiations. Developed countries like the United States, Australia, and EU do not agree.

“This is an issue that for us, adaptation and loss and damage are not optional. We experience in our hearts the broad spectrum of all impacts,” said South Africa, which spoke in behalf of the G77 and China.

As the climate negotiations in Bonn came to a close, Hurricane Patricia, now the strongest tropical cyclone in history, was on its way to Mexico.

Christiana Figueres, executive secretary of the UNFCCC, stressed that the hurricane is “a reminder of urgency” and that it is the “responsibility of all” to act on climate change.

COP21 is happening in Paris this year, where countries are expected to come up with a new climate agreement.