The threat of el Niño grande 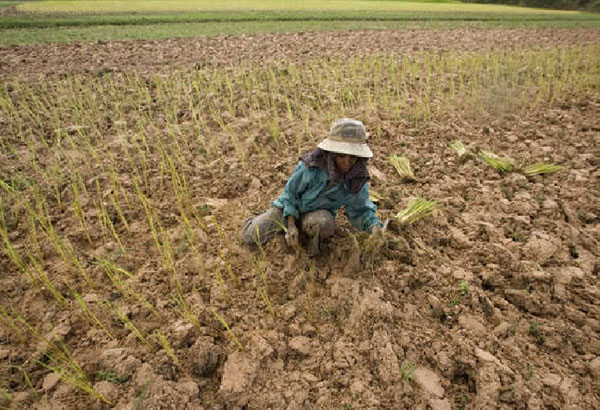 To city dwellers, this seems to be a fairly normal year, at least as far as the weather goes. We’ve had enough rain to cause a certain amount of suffering from flooded streets and snarled traffic to a few school days off, and are perhaps thankful that the typhoons we’ve had—though causing property damage and tragic loss of life—have been generally milder than those suffered in recent years.

But two groups have been considerably less sanguine: Filipinos in food production and the government agencies that deal with them. Loss and devastation, it turns out, do not always come upon us in a single catastrophic event. In early October, the Philippine Atmospheric, Geophysical and Astronomical Services Administration of the Department of Science and Technology (DOST-PAGASA) warned us about the “el Niño” phenomenon—officially called El Niño-Southern Oscillation (ENSO)—and its potential to inflict great destruction.

In the midst of seeking the necessary precautions for dealing with the ill effects of this meteorological phenomenon—especially in the area of fisheries and agriculture—typhoon Lando (international name: Koppu) arrived in full force.

Speaking in the past of disaster response, Department of Social Welfare and Development Secretary Dinky Soliman pegged it all to “global warming,” referring to our country’s climate condition as the recently-coined: “new normal.”

But this year’s el Niño does not represent anything new per se—the very name originated in Peru in the 1600s, long before today’s technology of planetary climate observation was developed—although the effects, combined with other global warming-related conditions, are hitting us yet again with a climatological double whammy.

What, you might ask, is happening? In a nutshell, you see, our geographical location puts us in harm’s way. The weakening of trade winds—the same wind patterns that directed Spanish explorers and adventurers to our islands and facilitated the historic galleon trade—causes Central Pacific water temperatures to rise. This activity occurs between December and February. Warmed Central and East-Central Equatorial Pacific waters pool near Indonesia and the Philippines—in part because of the shallowness of the West Philippine Sea—while, at the same time, causing great impact on global weather patterns.

In the Philippines, among its most adverse effects are the delayed onset of the rainy season and general uncertainty about rainfall conditions. This loss of two to three months of rain, combined with unseasonably extreme heat, casts a dire shadow over provinces and communities where livelihood is tied to agriculture. As of August 2015, DOST-PAGASA already noted that certain provinces were experiencing dry spells and droughts as defined by three consecutive months of below normal rainfall. Mindanao—rather than Luzon or the Visayas—is most affected, with twenty-two of its provinces facing dry spells and droughts.

This year’s el Niño threatens to dry up our lands even worse than the ‘97-‘98 el Niño. In 1998, weather disasters contributed to a 4.4% decline in our 2nd quarter GDP growth rate, significantly contributing to the Asian financial crisis. Likewise, the fishing industry alone suffered a whopping P7.24 billion in losses. Worse losses are possible with current climate conditions.

The US National Oceanic Atmospheric Administration (NOAA) and the United Nations’ World Meteorological Organization (WMO) form the body that declares an el Niño event. Over the past month, NOAA has recorded temperatures over the central Pacific at 2.4o Celsius (4.3o Fahrenheit), noting its similarity in magnitude to the el Niño of ‘97-‘98, which caused a record number of floods, fires and droughts.

Serious effects of el Niño are already being felt in various parts of the Asia Pacific and throughout much of Southeast Asia. The infamous haze-causing fires of Indonesia in particular represent not only an ecological disaster to the country itself, but also a public health menace to Singapore and even parts of Mindanao. Coffee and coco producers in many areas—including Viet Nam—are deeply concerned about additional losses.

Worldwide, el Niño is giving rise to expectations of drought in some places, threats of devastating floods, and powerful hurricanes that residents are generally ill-prepared to cope with.

In this country, we are preparing for the worst. First, DOST-PAGASA is monitoring and releasing bulletins regularly charting the event’s intensity. Also, an el Niño Task Force headed by Economic Planning Secretary Arsenio Balisacan has been formed, comprising the Department of Public Works and Highways, the National Irrigation Administration, the Department of Agriculture, and the Office of the Presidential Assistant for Food Security and Agricultural Modernization.

A Task Force has been organized tasked with producing a Roadmap to Address the Impact of el Niño (RAIN). It seeks to outline a mitigation plan and has proposed a P19.2 billion budget for government-wide programs to address the catastrophic effects of el Niño, which is expected to last until the second quarter of 2016. In addition, the government is pushing water conservation efforts and encouraging communities to practice conservation as a way of life. The Armed Forces of the Philippines has likewise been tasked with cloud-seeding.

In this country, we fortunately do not have the type of climate-change deniers we have in the United States. There is thus no organized opposition to programs meant to anticipate and mitigate the effects of weather calamities, especially those bound to come from el Niño (as well as his sister, la Niña, bearer of rain). Climate change is thus strangely democratic, encompassing both the rich and the poor.

Unfortunately, the same cannot be said about its effects, which are felt most by agricultural communities who subsist on little, but rely almost entirely on weather patterns. Inconsistencies in weather and climate make fishing and farming a challenge that threatens our food security. As a nation of rice-eaters, we need to contend with how scarcity and food-price inflation increase hunger rates among the already hungry. As always, the poor suffer more.

To deal with the unequal effects of climate change, the Philippine government has proposed a $15 billion budget to the United Nations Framework Convention on Climate Change, which aims to reduce greenhouse gasses by 2030. At the same time, in Bonn, the G77—developing countries representing 80% of the world's population—accused developed countries of stalling on funding issues. Developing countries want funding provisions to be a central part of the framework, but say that the nature of the meetings’ closed-door negotiations put poorer countries at an obvious disadvantage. They fear they might well be forced to take on an inordinate amount of unilateral debt instead of having a system of multilateral finance as a core part of the agreement.

Here in the Philippines—where we’re still paying off Marcos-era debt that did more good for certain families than it did for Filipinos in general—it is not hard to see the consummate unfairness of the entire proceeding. 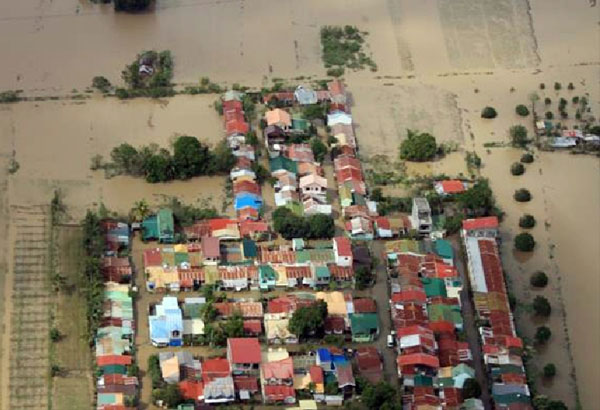 Floodwaters inundate homes and rice fields in northern Philippines in the wake of typhoon Lando. AP

Climate change is already costing us dearly—hampering economic development that hopes to reduce poverty and buttress human life itself. To date, the el Niño-enhanced typhoon Lando has cost the country 47 lives, 5 missing and led to 295,835 families to flee their homes. That’s 1,407,805 people—108,688 of whom are still seeking shelter in government-run evacuation centers.

So: while the Philippines is determined to be a decent global citizen and do its part in preserving the planet, the nations that prosper from selling us cars and electronics—McDonald’s and Starbucks, say—must be brought to understand that we—their worldwide consumer public—are bearing the brunt of their business success.

We want to clean up our environmental act, not just in global terms, but for our own health and welfare. We desire clean air and clean drinking water. We are constantly working to gain more of our energy from renewable sources. In fact, not being as burdened with old, inefficient industrial plants—as developed nations are—we are quicker to embrace cleaner, more sustainable, technological processes. Add to that, our frankly miniscule additions to global greenhouse gasses and we can see the need—if not the actual right—for better assistance and support from those reaping the most benefits from modern consumerism.

Not too long ago—in the wake of Ondoy, Yolanda and other tragic events—Philippine representatives spoke out forcefully in international fora about how climate change—mainly a product of the consumer-driven successes of highly developed nations—was causing massive loss of life and property among developing nations. For them, that cost in lives and property seemed a high price to pay. Today, nations trying to boot-strap their way into lower poverty rates and better living standards are constantly being set back by the type of disasters wrought by climate change. 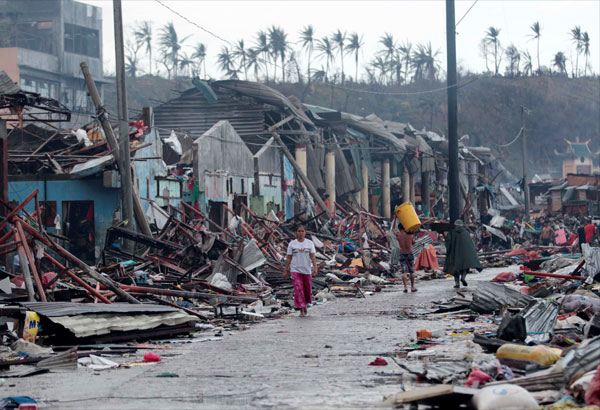 As we tread the path of this “new normal,” we would do well to keep abreast not only of developments in climate conditions as a way of saving lives, but also of international political and financial conditions that seriously hamper our development. While continuing to encourage public conservation and the spirit of collaboration embodied by agencies like DOST-PAGASA and the National Disaster and Risk Reduction Management Council (NDRRMC), we also need to take whatever measures are necessary to strengthen our voice in international climate affairs.

Indeed, as we take systematic steps to deal with extreme weather events like rising sea levels, el Niño and super-typhoons, we also need to hold developed countries accountable. Here’s hoping our representatives in next month’s Paris Climate Conference can convince the wealthy countries whose consumer economies have profited from climate change to also help mitigate its dire and tragic consequences.