SC is new battleground for coal fight in the Philippines

The fight against coal fossil energy in the Philippines has mostly been staged in localized battlefronts including the island province of Palawan. 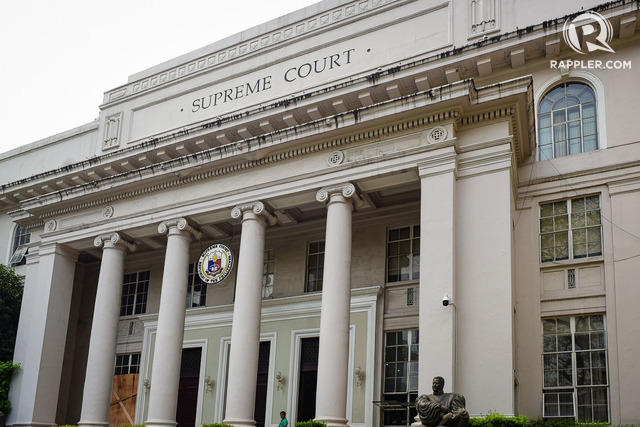 COURT OF LAST RESORT. The facade of the Supreme Court building in Padre Faura, Manila. Photo by LeAnne Jazul/Rappler

PALAWAN, Philippines – The case docketed before the Supreme Court will simply be called Ortega vs the DoE and DENR – a petition for mandamus filed by civil society groups that aims to stop the construction of new coal-fired power facilities throughout the country.

Ortega is Toribio Ortega Jr, a 79-year old retired engineer from Palawan who was among the ranks of civil society and community groups that spearheaded his hometown Aborlan’s successful fight against a coal-fired power plant project.

The legal action filed by the group of petitioners on June 30, 2017, was a petition for mandamus, a legal instrument that sought to hold the two government agencies accountable for their supposed failure to uphold the provisions of the country’s special laws that address climate change, specifically the Clean Air Act and the Renewable Energy Act. (READ: Environment groups file case vs DENR, DOE over coal plants proliferation)

As the government continues to rely on coal-generated electricity as a cheap but environmentally harmful technology to address the country’s power needs, the fight against coal fossil energy in the Philippines has mostly been staged in localized battlefronts including the island province of Palawan. (READ: The future of coal-fired power plants)

Civil society groups are pinning their hopes on the High Court to, at the very least, issue a protection order stopping the construction of new coal-fired power plants nationwide, in their bid to push the government to be more proactive in pursuing renewable energy alternatives.

“About 70% of power projects to go online in 2019 will be from coal. This means by 2021, coal supply will be at least 50% of our energy needs,” said Gerry Arances, convenor of Manila-based Center for Energy, Ecology, and Development.

The petitioners have accused the national government agencies of failing to perform their assigned duties to promote renewable energy and to regulate pollution emissions of coal facilities according to the standards set by the Clean Air Act.

“They (DENR and DoE) are not implementing the laws they are mandated to do,” said Ortega.

“We were glad that Secretary Lopez took a stand against coal but the government, in general, did not adopt it and has now instead continued relying on it,” he added in Filipino.

Ortega pointed out that they decided to undertake the legal action after the Cabinet appointment of former DENR Secretary Gina Lopez was blocked by the Commission on Appointments. Lopez had then declared her department’s opposition to new coal projects and had categorically denied the issuance of an environmental compliance certificate (ECC) to the Palawan coal project.

The petition has centered on the DENR and DOE’s supposed failed responsibility in upholding relevant environmental laws.

“The DOE has neglected its duty under the Renewable Energy Act to formulate Renewable Portfolio Standards Rules and to establish the Green Energy Options Program. The DENR, for its part, has neglected its duties to revise emission standards, designate attainment and non-attainment areas, prescribe effluent standards, and to administratively prosecute coal plants operating without the Continuous Emission Monitoring Systems and Continuous Emission Opacity Systems as required by the Clean Air Act,” the petition stated.

In fact, the Philippines landed on the top 30 countries worldwide that depend so much on coal, according to the report Boom and Bust 2017: Tracking The Global Coal Plant Pipeline, released last March by international environmental organizations Greenpeace, the Sierra Club, and CoalSwarm.

In a 2007 Greenpeace study, Palawan ranked second in the top 20 provinces considered vulnerable to sea level rise. The study revealed that an area covering 6,428 hectares of flatlands is vulnerable to a 1-meter rise in sea level, threatening human settlements, tourist hubs, and vital ecosystems such as mangroves and coral reefs.

Come heavy rain only brought by a low pressure and low-lying areas in southern and central Palawan are inundated by flood waters. In fact, the Provincial Climate Change Action Plan 2017-2023 has estimated that 73,201 people are exposed to high level of risk to flooding, with the towns of Balabac, Bataraza, and Puerto Princesa City being the most vulnerable.

The Paris Agreement, a global effort signed by the Philippines to address climate change, has set a goal of limiting global average temperature increase to well below 2°C and pursues efforts to limit it to 1.5°C. For its part, the Philippine government has vowed a 70% reduction in carbon emissions by 2030 and a 15.3GW renewable energy target. (READ: Duterte signs Paris climate deal)

“The health of the people around (the coal power plants) deteriorates. The fishery and agricultural resources are adversely affected, and the coal plant doesn’t pay for these negative externalities. That’s why it’s cheap energy – it’s the people that subsidize the costs for the coal,” former environment secretary Gina Lopez said in an interview prior to addressing the 22nd Conference of Parties in Morocco in 2016. (READ: Coal power plants in Bataan commit human rights violations)

Ortega and other Palawan civil society groups believe that Lopez’ recent replacement as DENR secretary has emboldened DMCI to revive its coal project in Palawan despite having already faced two rejections by communities in Aborlan and in Narra town. (READ: DENR approval next hurdle for DMCI coal plant in Palawan)

The company claims its project is the only solution to the long-term electricity supply problem of Palawan. DMCI’s contract with Paleco inked in 2012 allows the power provider to sell to the cooperative 25-MW of baseload electricity using its Semirara coal in Antique as fuel. (READ: DMCI wins bid for 25-mw diesel power plant in Palawan)

“To date, we have not been allowed to construct the coal plant which would have addressed the power reliability issue in Palawan. For the last 5 years, we have been urging the concerned government units and agencies to approve the construction of our 15-megawatt coal plant to prevent a massive power shortage in the province,” DMCI said in a statement in May.

Lopez had rejected the DMCI power plant in Palawan, but the company has recently pursued an action before the DENR now headed by a newly designated secretary, former army general Roy Cimatu, to secure an ECC for its project.

Cimatu has recently reversed an earlier department order issued by Lopez restricting the department’s regional offices from issuing ECCs, a move that the previous administration had hoped will ensure proper vetting of environmentally critical projects before they are given the green light.

The Palawan Electric Cooperative (Paleco) which had contracted DMCI to supply them cheap and reliable power supply, said it is anticipating a decision from the DENR on the fate of the Palawan coal project.

“We are waiting for the DENR’s reply (to a letter Paleco sent two weeks ago) asking whether they (DMCI Power) will be given an ECC or not. Just in case that they will not get a permit, that’s another issue to be discussed,” Endriga said.

Environmentalists have long been drumming up the government to allow renewables to take over the country’s energy mix and resist its dependence on fossil fuels.

In Palawan alone, technical studies conducted by the provincial government itself showed that renewable energy to be the cheapest source of power, based on the Palawan Island Power Development Plan (PIPDP) 2015-2035.

“Palawan is in a unique position to lead the clean energy revolution in the country, it can lead the way for other provinces to follow,” said Cynthia Sumagaysay-del Rosario, a lead campaigner of Palawan Alliance for Clean Energy (PACE).

“We are so rich with renewable energy (RE) sources such as hydro, a fact that has been backed up by proper studies and now embodied in PIPDP,” she added.

The provincial plan has identified potential hydroelectric projects in Palawan with an estimated capacity of 182.47 megawatts, which can provide energy supply of up to 959 gigawatt hours.

“As recommended by PIPDP, the wisest decision that our leaders can make for Palaweños is to integrate renewables in our energy mix,” Sumagaysay-del Rosario said.

“Energy from hydro will make the energy cheap for us; it is good for the green reputation of Palawan, and it will save the country a lot of money because we will no longer need a subsidy from the national government,” she added, emphasizing the move as “a win-win for everyone.”

Two months before the May 2016 polls, Palawan Governor Jose Alvarez appealed to the DOE to fast-track the approval of the applications for renewable energy (RE) projects in the province.

“To tell you very honestly, we are really discouraged on why the process of application and approval takes a very long time,” Alvarez, also the Palawan Council for Sustainable Development chairman, told DOE Energy Resource Development Bureau Assistant Director Ismael Ocampo during the 223rd Regular PCSD Meeting on March 31.

Renewables currently make up for 31.4% of the country’s installed capacity in 2016, DOE’s data showed.

Environmentalists believe that winning the battle versus coal at the Supreme Court, and letting renewables flourish not only in Palawan but all over the Philippines is a big stride towards the realization of the country's commitment under the Paris climate deal. – Rappler.com