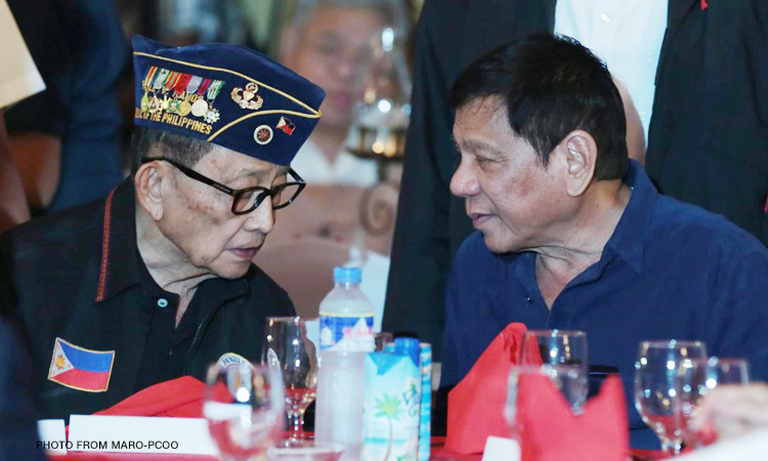 Former President Fidel Ramos (L), one of the key figures who convinced then Davao City Mayor Rodrigo Duterte (R) to run for the highest post in the land, now criticizes the President’s foot-dragging on climate change deal.

Metro Manila (CNN Philippines) — President Rodrigo Duterte must ratify the Philippines’ accession to a landmark climate change pact to be adopted in November or place Filipinos at risk of the severe effects of global warming, former President Fidel Ramos warned.

“Any further delay will increase Filipinos’ vulnerability to super typhoons that are forecast to come soon,” Ramos said in an impassioned editorial published in the Manila Bulletin on October 29.

He cited the back-to-back typhoons in October that left hundreds of thousands displaced, up to P10 billion (US$ 208 million) of crops in northern Luzon destroyed, and infrastructure worth P1.5 billion damaged.

“Is he [Duterte] allowing his countrymen/women to continue suffering from the devastating effects of typhoons “Karen” and “Lawin” — which are the forerunners of serial catastrophe ‘La Niña,” Ramos wrote.

La Nina is the weather phenomenon characterized by a cooldown of water temperatures in the Pacific Ocean, and is linked to widespread changes in weather patterns.

The Philippines is one of the 15 countries most vulnerable to climate change, according to the 2016 Climate Change Vulnerability Index.

“These massive losses plus the continuing misery of millions of our people in the affected areas in terms of destroyed homes, diminished livelihood, inundation, absence of electric power, and disruptions in schoolwork are totally unacceptable,” Ramos added.

On November 4, the Paris Agreement on Climate Change which mandates countries that ratified the agreement to commit to curbing their carbon emissions by 2030 will come into force.  Nations who ratify this agreement also commit to efforts that will keep the rise in global temperatures at 1.5 degrees celsius up to the year 2100.

The Philippines is one of 197 nations that signed the agreement on April 22, 2016, a few weeks before President Duterte won the presidency with 30 percent of the vote.

But for the climate change agreement to be binding on the Philippines,  it needs to be ratified.

The Paris agreement is seen as a major global effort to curb the warming of planet Earth which has experienced a rise in sea levels due to the faster melting of ice caps in the temperate zones, as well as more extreme weather disturbances.

Duterte: Why impede our development?

President Duterte has scoffed at ratifying the agreement, saying it penalized developing nations like the Philippines by forcing them to lower their emissions. He has disagreed with the 70 percent emission goal by 2030 that will be mandated on countries that ratify the agreement. This was committed to by his predecessor, Benigno Aquino III.

[“I said, ‘You [referring to the developed countries] have used carbon for the longest time. We want to be like you but if you stop us because of this, I said ‘That’s foolishness.’”]

Ramos, in the editorial, noted that the Philippines is responsible for only about one-third of one percent of yearly global emissions.

He said he agreed with Duterte that developed countries who are responsible for most of the carbon emissions should bear thesignificant brunt of limiting emissions. Developing countries like the Philippines should be allowed to grow their economies,  if “done in the context of sustainable development and poverty eradication,” the elder statesman added.

But Ramos criticized the administration’s foot-dragging on the Paris agreement.

“It is clear enough (and should be readily understood by leaders) that the Paris agreement does not impose emission reduction on the Philippines,” Ramos noted. “Should any country decide to eventually become a party tothe agreement, it will only be asked to submit it’s nationally determined contributions,” he added.

The elder statesman, who was one of the key figures who convinced a then-reluctant darkhorse Duterte to run for president, has since criticized the tough-talking leader.

To date, 86 out of 197 parties accounting for at least 55 percent of global emissions have already ratified the Paris Agreement. This 55 percent mark was reached on October 5, which is why the agreement will be enforced on November 4.