Preparing the country against climate change

Every country faces the impact of climate change, a global phenomenon that has caused distress for decades. Over the years, governments and organizations have learned approaches that mitigated the harmful effects of climate change, preparing the public to become more resilient.

The Philippines, through the efforts of its local government and private organizations, has taken vital steps toward combatting the effects of climate change, equipping Filipinos with the knowledge and tools to achieve the lofty goal of saving the planet.

An average of 20 typhoons enter the Philippine Area of Responsibility annually. Although many Filipinos are aware of this occurrence, the typhoon’s intensity takes them by surprise.

The Philippine Atmospheric, Geophysical and Astronomical Services Administration (DOST-PAGASA), for one, warns the rising sea levels in the Philippines could affect various industries in the country.

Rising sea levels arise from the additional four degrees Celsius expected to increase in temperature by the end of the 21st century. Experts from PAGASA note that the continuous climb in temperature has caused sea levels to rise by five inches during the past two decades–three times faster than the world average.

Understanding the gravity of the situation, the national government has since imposed measures that prove its strong commitment to a climate policy and institutional reform agenda. 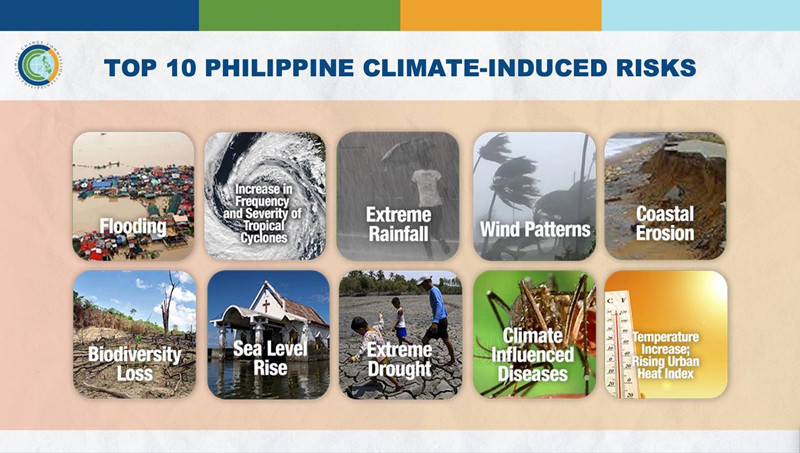 The Department of Environment and Natural Resources, tasked with creating an information management system, has a Climate Change Service that addresses the needs surrounding the issue.

Besides the DENR, other government agencies assumed their parts in combatting climate change. Since it’s not an easy feat, it requires a significant budget that focuses intently on the issue.

In the recent CCC commemoration of the 15th Global Warming and Climate Consciousness Week held last November 21, Monday, government leaders led by the Department of Finance emphasized the national targets on mitigation and adaptation. It calls for fortified commitments from international channels and the private sector to invest in the Philippines’ priorities on climate action.

Philippine President Ferdinand “Bongbong” Marcos Jr. also underscores the need to combat climate change and meet the requirements of the Paris Agreement on the issue, which aims to lessen the amount of greenhouse gas emissions in the environment, thus lowering the level of global warming.

Throughout the Philippines, local government units have mobilized initiatives that contributed to the country’s bid for climate resiliency. Some even went far as to ban plastic, impose environmental laws that promote cleanliness, and teach Filipinos about the relevance of climate change in their daily lives.

The national government, along with its foreign counterparts, recognizes that for any effort to become effective, there has to be a collective attempt from them, the private sector, and even everyday citizens. 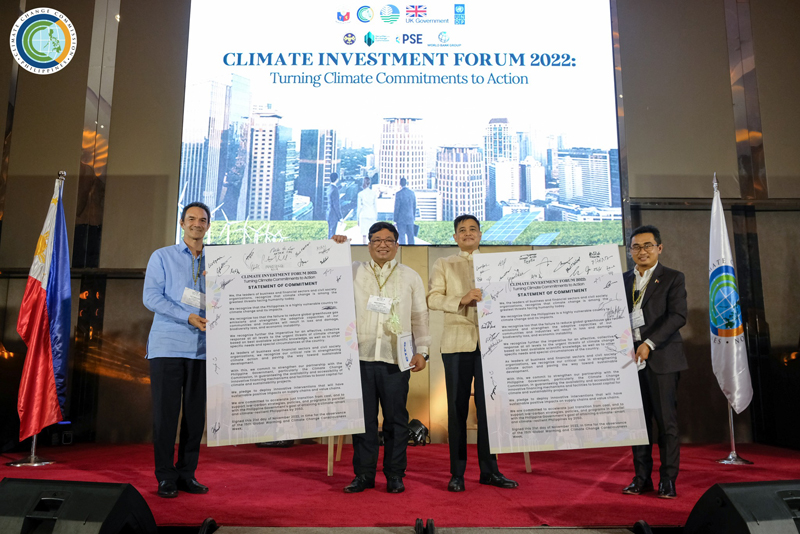 Government leaders, business and financial sectors, and civil society organizations commit to boost investment for climate and sustainability initiatives and accelerate just transition to achieve a climate-smart and climate-resilient Philippines by 2050. (Facebook page of the Climate Change Commission Philippines)

Some private companies in the Philippines also recognize the role they can play in mitigating the effects of climate change. As a result, they don’t hold back in participating however they can in creating a safer place for present and future generations.

An example is Manulife’s corporate social responsibility. As one of the leading life insurance firms in the country, Manulife assumes responsibilities that help make life better for everyone.

Manulife actively incorporates climate change considerations in its decision-making for operations, investment decisions, and products and services. The company partnered with Haribon Foundation to demonstrate the relevance of nature-based solutions in preserving the planet.

Forests are a vital part of the planet that keep temperatures down, provide shelter for ecosystems, and prevent soil erosion. Manulife established the partnership Forests for Life program with Haribon to restore Philippine rainforests. Manulife commits to planting 15,000 seedlings that cover 12 hectares of land in Haribon’s conservation areas in Laguna, Quezon, and Rizal.

In the meantime, some companies pledge their corporate social responsibility to the environment through financial efforts. For instance, Landbank, a government-owned bank in the Philippines, focuses on serving the needs of farmers and fishermen, and offers policies supporting initiatives for combatting climate change.

Landbank commits to innovative products and services that allow the bank and its clients to fulfill their sustainability and environmental protection goals through business lines, lowering carbon footprints, and promoting ecological enhancement.

Their Environmental Policy on Credit Delivery ensures that all financed projects are environmentally-sound and compliant with all environmental laws. Meanwhile, the Green Procurement Good Practices serve as the bank’s supplemental guide in setting standards to evaluate products and services.

As for getting the public involved, SM Cares celebrated Children’s Month this November through a partnership with SMDC Light Mall and the Emmy-nominated children’s show Superbook. They created a specially-designed program that teaches children the significance of disaster preparedness.

It educated children on common disasters in the Philippines, such as earthquakes, volcanic eruptions, and floods, and gave them tips on what to do in times of calamity.

While mitigating the effects of climate change remains the primary goal, the Philippine government and private companies also instill that resiliency through disaster preparedness, can also help the community avoid intense impact. Disaster preparedness is a relevant value to have, particularly when climate change phenomena have increased their intensity. It’s something that every industry should learn because of how it could affect their progress in the future.

Mitigating the impact of climate change is an enormous feat that could become successful through the collaborative effort of governments, private companies, and the public. With enough initiatives and participants, the world could lower temperatures to preserve the environment and everything in it.