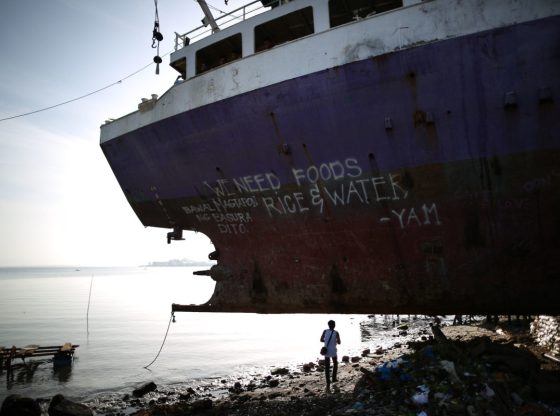 The Philippines’ Commission on Human Rights has had a busy year thanks to a dispute with President Rodrigo Duterte over police killings in the drug war, but it’s about to tackle another blockbuster: an effort to hold fossil fuel companies responsible for the human rights abuses inherent in climate change.

In the process, the Philippines, an island nation that ranks third among countries most at risk from climate change, will become a testing ground for a human rights approach to climate liability.

The commission is investigating whether the collective contribution to global warming by 47 coal, cement, oil and gas companies has violated Filipinos’ basic rights to life, water, food, sanitation, adequate housing and self-determination. The companies under investigation include some of the world’s biggest fossil fuel producers, such as ExxonMobil, Chevron, Shell, Rio Tinto and Total.

Petitioners asked the commission to investigate these companies because these businesses are among the 90 firms that have been identified in research as being responsible for nearly two-thirds of the greenhouse gas emissions since the start of the industrial age. That means these companies are also responsible for the increasing number of devastating natural disasters, including Typhoon Haiyan that killed more than 6,300 people in the country in 2013, the petitioners said.

“More communities are starting to connect the dots between these impacts and the cause of them,” said Desiree Llanos Dee, a climate justice campaigner at Greenpeace in the Philippines. “We are asking the companies to take measure to respect the human rights and present their plans to stop further carbon emissions and remedy the harm they caused.”

Greenpeace, along with 13 other environmental and community groups and 18 individuals, petitioned the commission in 2015 to launch an investigation.

In recent months, the commission staff has visited communities to gather information about how people’s lives have been impacted by climate change, Dee said. The commission plans to hold a pre-hearing conference with both sides in December and start public hearings in the first quarter of next year, said Commissioner Roberto Cadiz, who is leading the investigation.

The case is unusual for attempting to tie the harm from climate change to human rights abuses by the fossil fuel industry. Claims of human rights violations and abuses haven’t been common in climate cases worldwide, though more cases are emerging.

One of the rare examples is a 2005 petition from the Inuit Circumpolar Conference that asked the Inter-American Commission on Human Rights to investigate the United States for the harm its greenhouse gas emissions has caused. The Inuit wanted the Inter-American Commission to recommend the U.S. reduce its emissions and work with Inuit to deal with the impacts of climate change, but the commission declined to rule on the case.

The petitioners in the Philippines see their case as a means to create legislative and legal pressure on companies to cut their emissions and move away from extracting and selling fossil fuels. So far, early attempts to win damages against fossil fuel companies in courts around the world have not been successful.

The commission could recommend the government to actions such as passing tougher environmental laws or working with countries where the fossil fuel companies are located to reduce the human rights impact of climate change, Cadiz said.

Any findings of human rights abuses could also form the legal basis for lawsuits and set an example for other countries to follow, said Kristin Casper, litigation counsel for the climate justice and liability project at Greenpeace.

“There’s a growing awareness of the human rights implications of climate change,” Casper said. “A finding of responsibility can be used by people who are vulnerable to climate change to seek relief through litigation or legislative reform.”

So far, 17 companies named in the petition have filed written responses with the commission. They mostly disputed the authority of the commission to investigate them because they don’t operate in the Philippines, or they argued that climate change isn’t a human rights issue under domestic or international law.  The most recent count by Greenpeace showed nine companies that operate in the country, including Chevron, BP, BHP Billiton and Taiheiyo, a Japanese cement firm.

Most of the 13 companies reached for comment for this story, including Chevron, ExxonMobil, BP, Marathon and Murray Coal, declined to discuss the case. ConocoPhillips sent a link to its view and action on climate change. The only exception was Anglo American, a U.K. mining firm, whose spokesperson, Marcelo Esquivel, said while the company is committed to addressing climate change, it doesn’t believe the Philippines’ case has merit.

“We believe the Philippine CHR is not the correct forum to be considering, or for Anglo American to be engaging on, such global challenges,” Esquivel said via email. “We also believe any discussion should include parties beyond the privately owned or publicly listed extractives industry companies identified in this petition, such as national governments, regulators, electricity generators, consumer goods companies and state-owned enterprises, amongst others.”

Whether the commission can investigate and monitor the actions of corporations is a valid issue to raise because the legal framework for human rights typically holds the government responsible for protecting the rights of its citizens, said Sumudu Atapattu, a professor of environmental and international law at the University of Wisconsin Law School.

A few ongoing court cases aim to hold the government rather than corporations responsible. In Norway, Greenpeace and another environmental group, Nature and Youth, filed a suit against the Ministry of Petroleum and Energy over a set of licenses it issued last year to drill for oil and gas in the Arctic. In India, a 9-year-old girl sued the government for allegedly failing to take actions to protect her and her generation from the harm of climate change.

“Climate change is cumulative. Everybody is contributing to it, and your state’s contribution to it might be minimal. As a result of that, the human rights framework doesn’t fit neatly into climate change,” she said. “We need to rethink the existing structure if we are going to do the litigation right, in terms of human rights and international law.”

Establishing a clear link between certain businesses and the harm of climate change will become easier over time as more research and investigations emerge to define the cause and effect, Casper said.

“We are looking at how these actions collectively add up to create the corporate shift we need to make sure the business models line up with the 1.5 degree world. So that we have a fighting chance of survival,” Casper said.