Published on 2 May 2014 Philippines 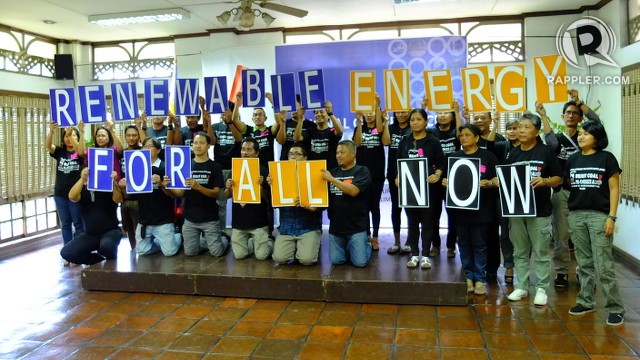 MANILA, Philippines – While the the latest United Nations (UN) report on climate change calls on countries to leave behind fossil fuels as a source of energy, the Philippines is stuck with it, thanks to the government's "coal addiction." Photo by Pia Ranada

This was the statement of various Philippine climate action groups after the release of the 3rd chapter of the Intergovernmental Panel on Climate Change 5th Assessment Report (IPCC AR 5).

The report focused on what humans can still do to reduce the greenhouse gases emitted in the atmosphere and causing the Earth to warm up.

The Philippines has 17 coal plants all over the country, combusting coal to produce energy. Every year, they spew 32.1 million tons of carbon dioxide (CO2), the greenhouse gas with the highest concentrations in the atmosphere, according to the Philippine Movement for Climate Justice (PMCJ).

There are 24 new coal power plants on the way, and they are estimated to release 52.8 million tons more yearly. An additional 20 power plants have been proposed.

"The Philippine government must stop its addition to coal and radically shift to renewable energy. There is no place for coal in a changing climate," said Aaron Pedrosa of Sanlakas, head of the energy working group of PMCJ. (READ: The Philippines' addiction to dirty coal and dirty politics)

Coal provides 40% of the world's electricity. It is responsible for 39% of global CO2 emissions. These emissions choke the Earth's atmosphere, thereby preventing the sun's heat from diffusing. The result is a steadily warming planet.

The latest UN report says that if humans do nothing to drastically cut down on fossil fuel energy sources, the Earth will be 3.7 to 4.8 degrees Celsius (°C) warmer by 2100.

This is way beyond the 2°C limit set by IPCC scientists. Anything higher than this limit would lead to catastrophic weather events, like excruciating droughts, freak super storms, and unprecedented sea level rise that could submerge large human populations.

To stop this from happening, the world needs to "triple or nearly quadruple" the share of energy from renewable and nuclear sources, according to the UN study. Unlike fossil fuel sources, which continue to dominate the world's energy mix, RE sources do not emit greenhouse gases.

A study by the International Energy Agency (IEA) corroborates the need to leave behind "dirty" fossil fuel energy. The study says that to keep temperature increases to safe levels, no new fossil fuel plant should be built starting 2017.

Despite the worrying rise in emissions, the UN report says there is a 15-year window during which humans can reduce greenhouse gas emissions enough to keep global temperature within the safe limit.

More urgent in the Philippines

For the Philippines, the need to shift to renewable energy is even more urgent.

"The temperature in the Philippines is always 1°C higher than the global average temperature because we are a tropical country," PMCJ national coordinator Gerry Arances told Rappler.

Any increase in global average temperature is thus more debilitating for the Philippines because it is magnified by the tropical temperatures natural to the country.

For this reason, local climate justice advocates set the limit for the Earth's warming at 1.5°C instead of 2°C.

"The IPCC report shows that even at 2°C, there will already be deadly impacts to food security, agriculture, marine resources, and human populations because of weather events. So the limit should be lower, especially considering tropical countries," he said. (READ:Climate change creating 'new poor' in PH)

The Department of Energy (DOE) has given the public assurances it is still aggressively pushing for more renewable energy in the country.

It has given the go signal to renewable energy developers to generate 633.5 megawatts of electricity for the national power grid by the end of 2014.

The approved RE projects are working under the feed-in tariff system, the government's new financial regime to provide incentives to more RE projects in the country.

The DOE is also creating an inventory for RE resources and doing pilot projects to test the feasibility of rooftop solar power installations, Marasigan added.

Despite the push for renewable, however, the DOE admits the country will be stuck with coal for many years to come because it remains the cheapest source of energy.

"We cannot do away with fossil fuels, at least in our lifetime. The demand [for energy in the Philippines] is still increasing and that's why we still have to accommodate coal," said Marasigan in a previous interview with Rappler.

"If you remove existing coal plants, you will have brown-outs. So what we are doing now is replacing the coal plants in the pipeline with clean energy," he said.

He said that, in many cases, "approved" coal projects are abandoned by the government because of fierce opposition from citizens who object to the health and environmental impacts of coal power plants. – Rappler.com