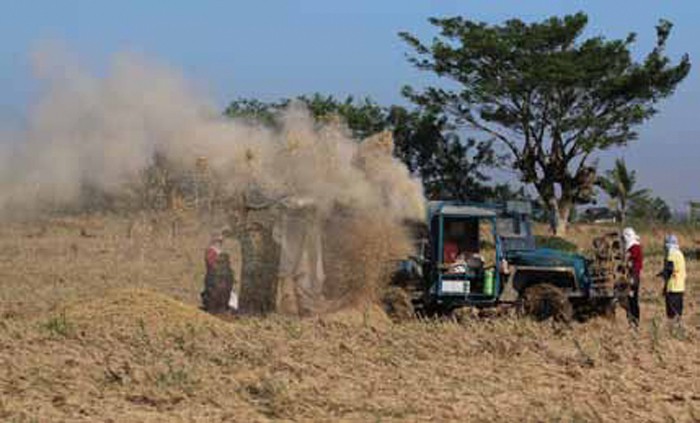 In Photo: Dust from the dried mud that stuck to the rice grain flies out of a thresher. Image Credits: Nonie Reyes

JAEN, Nueva Ecija—Caked mud left an imprint on the bamboo floor as farmer Kadjo Domiquel climbed inside a nipa hut overlooking his farm that was destroyed by Typhoon Lando (international code name Koppu).

“You say this was caused by climate change?” he nodded toward the field that was formerly green with a carpet of rice stalks. “If this is change then it’s not for the better,” he said haltingly in Filipino and looked away to hide the tears building up in his eyes.

Dark clouds obstruct Domiquel’s future as Lando left his and other farmers’ rice fields were submerged in water for nearly a week. Three days after, the flooding subsided, but black muck covered the farms.

Where chaff formerly blows into the wind, the thresher that separates rice grain stalks from the straw now only churns out dust from dried mud, locally called banlik.

“It was like a flowing river,” Domiquel said of the water the typhoon unleashed into the province named after the old city of Ecija in Seville, Spain.

“The only difference is the water was muddy and carried logs. I have no idea where the logs came from since we don’t have forest in this place.” The mud wrapped the stalks of rice with brown soil, he said.

“How will I earn a living for my family? What are we going to eat when even pigs will not eat the muddied rice from these stalks?” Domiquel asked in Filipino.

Domiquel said he also worries about his barok (farm helper). “If my landlord would not earn anything, what more of myself, a farmer who just earns a percentage from the rice yield? What more of him?” pointing his lips toward his farm helper bent on rice stalks.

“I hope the government would help us.”

Considered as the rice granary of the Philippines and a paradise to rice farmers, this town in Nueva Ecija directly experienced one of the worst storms—in terms of sheer strength and scope of destruction—that hit the country this year, according to the National Disaster Risk Reduction and Management Council.

Before Lando hit, this town posts an average of 80 cavans of rice to as much as a hundred per cropping season. Jaime Cruz, Jaen’s agricultural officer, said that out of the total 6,214 hectares, “rice was harvested only from 14 hectares before the typhoon struck.”

“Based on what we saw in the rice area from 20 barangays, we declared this season’s rice planting was a total loss. But the Bureau of Agricultural Statistics people said they saw that some were able to harvest, threshed and dried their grains. So they declared only an 80-percent loss,” Cruz said in Filipino.

“Our rice plants, vegetables and other sources of livelihood were severely affected. Based on the agreement with the Municipal Agriculture Office, free seedlings would be given to farmers by the government,” Pepito Mariano, Jaen’s agricultural extension worker, said.

According to Mariano, the town has been flooded before but not this deep.

“The mud was not this deep, and the destruction not this big. Based on what I saw, the cause of this deep flood with mud in our province was landslide and deforestation. The possible cause was illegal logging and also climate change. Based on my analysis, the water came from Dingalan in Aurora [province],” added Mariano, who is also the Municipal Environment and Natural Resources Officer of Jaen.

The 2012 World Risk Index ranked the Philippines as the third most vulnerable country to climate change.

As the wind picked up chalks of dust from dried mud onto the bamboo floor of his hut, Domiquel smiled as his helper glanced at him and signaled lunch of rice and fish cooked in vinegar would be served.

“There is still tomorrow, isn’t it?” he said, reflecting the resilience of impoverished Filipino farmers that could well be their best weapon against climate change.