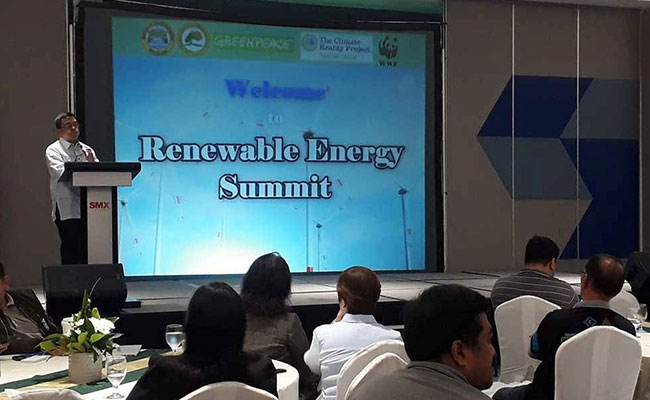 WITH its abundant renewable energy resources, Negros Island Region is poised to become an entirely “green” region by 2030, an official of the Department of Energy (DOE) said.

National Renewable Energy Board Chairman Jose Layug, who spoke at the Negros Renewable Energy Summit 2017 at SMX Convention Center Bacolod on Thursday, July 13, said the region has biomass energy sources that can serve as base load on top of solar and hydro power.

Layug said the National Energy Program has a doable target of 35 percent renewable energy use in the country by 2030.

With the region’s current generating capacity of 300 megawatts, a lot will come from Negros, he added.

“People in Negros should be happy and proud that they are in an island that can really be 100 percent renewable,” Layug said, adding that “it’s a model region which ensures that climate change is addressed by utilizing renewable energy.”

The DOE official lauded the efforts of the Provincial Government and its partner-stakeholders, including the Climate Reality Project Philippines, Greenpeace Philippines, and World Wildlife Fund in leading the summit participated by stakeholders and key actors in the renewable energy sector.

Reubin Muni, climate and energy campaigner of Greenpeace Philippines, said the summit underscores the need to look at how each sector can contribute to finding solutions. Muni said the gathering will allow all stakeholders to gather and sort out the issues first and come up with policies as initial steps in crafting the Renewable Energy Roadmap for the region.

“This roadmap will concretize long-term plans and strategy for renewable energy development in the region,” Muni said, adding that through this development plan they are optimistic to achieve the goal of making Negros the first region to be entirely renewable by 2030.

Lawyer Wilfred Ramon Peñalosa, head of the Provincial Environment Management Office, said the summit is also aimed at developing a shared understanding of the current renewable energy landscape in Negros.

Peñalosa said the activity was just the start of making a strong roadmap, which involves a long process designed for long-term solutions and not “band-aid” ones. “Now, it is not only an issue of the supply of energy but also becomes a concern of economics including investments, tourism, and labor, among others,” he added.