Janice Lao, who steered the Hongkong and Shanghai Hotels Group’s shift away from single-use plastics last year, talks about being a sustainability leader, supporting her daughter’s burgeoning awareness of climate change, and her unsustainable guilty pleasure. 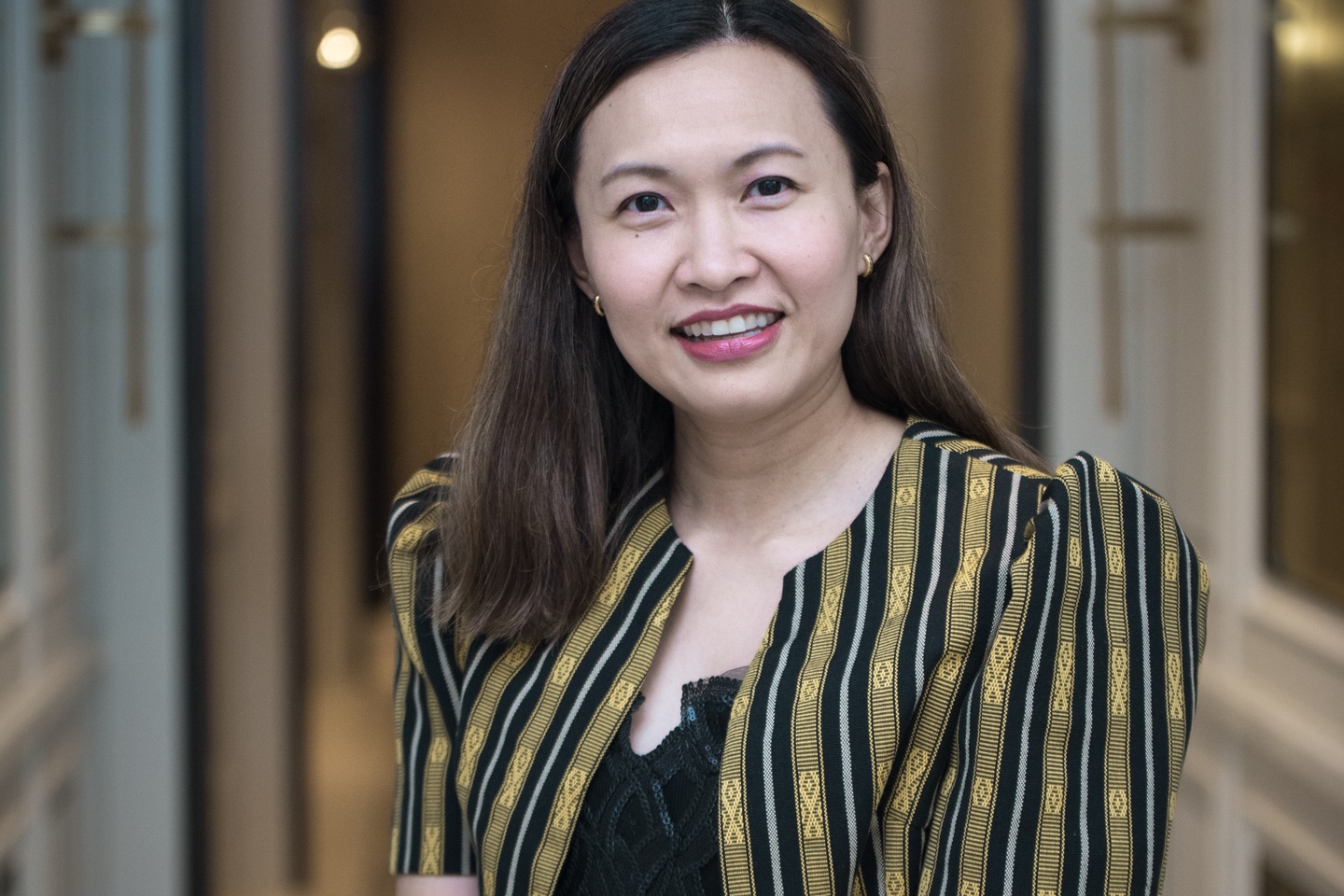 Janice Lao has earned a reputation for being a pioneer in every sector she's worked in. In her current role as director of corporate responsibility of the Hongkong & Shanghai Hotels Group, she is communicating sustainability in luxury. Image: Tim Daubach/Eco-Business

When Janice Lao took the helm of sustainability at one of Asia’s oldest and most prestigious hotel groups three years ago, she had already spent more than a decade leading efforts by some of the world’s biggest companies to reduce their carbon footprints.

From tirelessly lobbying for a shark’s fin ban to pushing for one of Asia’s first green bonds in her previous roles, Lao now finds herself championing sustainability in luxury.

Hired in December 2016 by the Hongkong and Shanghai Hotels Group, the parent company of the five-star Peninsula hotels, the former Cathay Pacific and MTR Group sustainability executive was faced with a new challenge: to address the environmental and social impact of hotel operations, such as the use of single-use plastics.

The Filipina went on to spearhead the hotelier’s global commitment to phase out plastics, including water bottles, straws, packaging and bathroom amenities, by 2020. She revamped the company’s Vision 2020 Sustainable Luxury policy to integrate sustainability into the business’ risk management and finance groups, which are not traditionally focused on sustainability.

It was this tenacity that qualified the Hong Kong-based executive for the inaugural Eco-Business A-List, a who’s who of the most influential corporate sustainability executives in the Asia Pacific who have done the most to make the business less harmful for people and planet over the last 12 months.

Lao, who studied environmental science and development economics at the University of Oxford and sustainability leadership at Harvard, has remained remarkably self-effacing and humble despite her achievements.

In this interview, the mother of two young children discusses why there is still much to be done in the world of sustainability and the most important project she undertook in 2019.

What’s the hardest thing about your job? Trying to get buy-in on a future no one can yet imagine, from people I deal with on a daily basis—from our housekeepers to our senior management at work.

At work, it’s hard to convince senior management on how soon these [climate change] impacts are going to happen. It is the uncertainty of not knowing when something is going to happen, and how bad it’s going to be, that is a barrier.

When I started out as a scientist [early on in her career, she worked for research group World Resources Institute and infrastructure company AECOM], I already knew the facts. The facts have not changed. We’ve just had more facts to back us up. But despite all the evidence, we still haven’t convinced people to change.

I also have a hard time having that conversation about not using clingwrap and single-use plastic with our helpers at home. It’s just a very difficult mindset to change.

But my husband is a convert; my kids too, as they learn about it in school.

What’s the most important thing you’ve done in 2019? My daughter is writing a book on climate change. The most important thing I’m working on, and I’m most proud of, is bringing that project to life for her. She’s nine years old and she’s talking about climate change through her eyes. When she was summarising to me her thoughts, the story wasn’t initially about climate change. It was about her favorite animals—the narwhal and the whale—trying to find out why someone’s trying to destroy their home.

She was very concerned that her favorite animals were losing their home and she wanted to write about it. The book is called Sparky and Ben, the big home problem.

It’s a story that reflects the [eco] anxiety of a child. I’m very protective of her perspective. I want to bring that story as soon as possible to the public, not just because she’s my daughter, but because [climate change and habitat destruction] will impact the future of children like her.

What’s the biggest question CSOs should be asking themselves this year? What tangible outcomes do we have to show? It’s not about ESG reporting, it’s not about questionnaires, but what change have I actually enabled and has that change scaled up? We need to stop looking just internally within our own organizations, but see how our actions have influenced the whole sector we’re in.

What’s the most effective way to persuade your CEO to take sustainability seriously? Taking the topic of sustainability beyond the realm of operating as a responsible business. When I would speak to my previous CEOs, usually my conversation would be about economics and how sustainability is going to impact the business economics of the company.

For the plastics commitment by Hongkong and Shanghai Hotels, we saw that nearly all the cities we were operating in would be implementing some sort of regulation around plastics. If the majority of the cities we are in have those regulations, we have to have the same practice even in cities without regulations because we are a global brand. We have to be consistent.

That practical type of risk discussion was one of the reasons why my CEO was very open to signing up for the transition away from plastics.

My CEO saw the regulation as a sign of certainty and policy. It’s very easy to make business decisions when you have certainty. The more challenging part was technology. We don’t know if there is technology for every item out there. If we are not able to find a solution for every item, we can be transparent enough to our stakeholders and say we tried, and here are some of the items that we couldn’t find solutions for. It’s hard to find alternatives to plastic for kitchen items and anything that has to do with food and hygiene.

If you could start your sustainability leadership role again, what would you do differently? I wish I had taken psychology, anthropology—anything related to human behavior. The science and maths part of being a sustainability officer is easy; it’s having to deal with human behavior that is the most uncertain part of the role. It’s change management. I cannot change people. I can only be with them in their journey of change.

Who’s your sustainability role model? Mike Barry, the former sustainability director of (British retailer) Marks and Spencer (M&S). He’s not only concerned with what M&S is doing. He was also trying to change the sector and bring suppliers on board. The old way of doing sustainability was very prescriptive: suppliers have to follow the supplier code of conduct and if they don’t, they were kicked out.

Barry’s approach was more about working with suppliers. I don’t see that often and I think he was very visionary. He stayed in the company long enough to really see changes being made and companies being influenced. Patience is a virtue in this sector.

M&S’s sustainability plan in 2017 had 100 commitments. Back then, it was unthinkable but now it’s the norm.

Being able to collaborate, to work with different stakeholders, whether it’s suppliers or bosses, within or outside of your sector—this is what a sustainability leader’s mindset should be.

Nobody’s perfect—not even CSOs. What’s your unsustainable guilty pleasure? Jollibee Chicken Joy. I am Filipino so I grew up with that. I haven’t found a vegan alternative yet. I eat Chicken Joy once a week in Hong Kong and look forward to a vegan version one day.

Why will you never be replaced by a robot? Because I have empathy. That’s very difficult to replace.

Which sustainability buzzword could you live without? The word “sustainability”. I think it’s overused and people misunderstand it. It has six syllables. You can’t elegantly describe it in any language. What is “sustainability” in Filipino? There isn’t an equivalent word, right? The term in Chinese is not even an elegant term, it’s a very technical term. It’s so far removed, very esoteric. It doesn’t really impact us. There is no emotion attached to sustainability. I feel like we need to use a different word.

On my part, I don’t use the word “sustainability”, I just describe it in a different way, depending on the situation.

The Intergovernmental Panel on Climate Change’s 10-year climate deadline to reduce emissions to avoid the worst consequences of climate change. Will we make it, or are we doomed? I’m always an optimist, I have to be. I am hopeful that we will meet the deadline. The fact that the Oxford dictionary named “climate emergency” the word of the year, and seeing young people fighting for this issue, make me very hopeful.