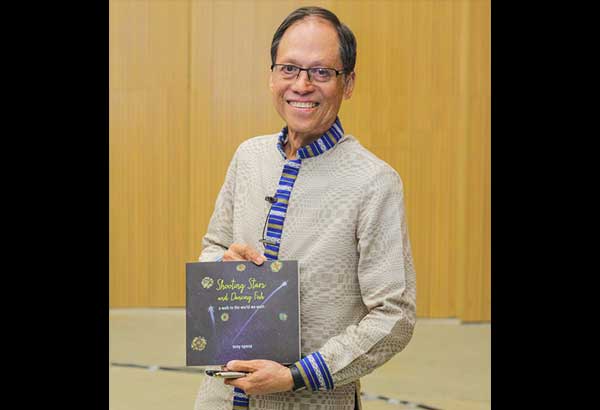 MANILA, Philippines - This is not a book,” says Tony Oposa, author of Shooting Stars and Dancing Fish. “It is an invitation to take a walk to the world we want.”

An internationally recognized environmental lawyer and activist, Oposa prefers to call himself “a guide and storyteller.”

Shooting Stars and Dancing Fish is part memoir, part treatise, and part storybook, punctuated with photos, paintings, and poems that would appeal to both young readers and policy-makers. Oposa, who received the Ramon Magsaysay award in 2009, has an interesting way with words that transforms what might seem complex subject matter for many into something simple and easy to grasp.

“We are in a state of crisis,” he writes. “Let us stop calling it ‘climate change.’ That is too mild a name to describe what is happening. From now on, let us call it the ‘climate crisis.’” Still, he is quick to remind the reader that on the other side of “crisis” is “opportunity.”

Oposa likes to coin words and phrases for easy recall, such as “Ex-Con Economics,” which refers to the mindset of “reckless Extraction and mindless Consumption,” or what he calls  “the crime of planetary plunder.” The opposite of this is “CPR Economics,” or Conservation, Protection, and Restoration. CPR also means cardio-pulmonary resuscitation of the vital organs of life: land, air and water,  the “LAW” of life.

What is needed is a shift in thinking. Oposa proposes simple solutions that are at once radical yet practical. There are, in fact, already existing laws that address chronic environmental problems, which Oposa compiled in an earlier book, A Legal Arsenal for the Philippine Environment. Unfortunately, he says, “Our laws are often taken as mere suggestions.”

“There are two things that can change the world, if we only do it,” Oposa says. One addresses the problem that is top-of-mind today among many urban dwellers who are inevitably compelled to suffer the oppression of the daily commute — traffic congestion.

“Turn around the road system 180 degrees. Make the roads more narrow,” Oposa proposes. “This is not a joke. Smaller roads lead to wiser use.”  He calls it “road sharing.”  The principle is expressed in Executive Order No. 774, which states that “Those who have less in wheels must have more in roads.” The formula is simple: divide the road in half.  Half will be for motorized vehicles moving efficiently; an entire lane will be dedicated to public transportation.

“The car is the enemy,” he says. “If the public transportation system is good, you don’t have to buy a car.”

The other half of the road will then be free “for people to walk, bike, and plant food gardens.”

Which brings us to the other thing that Oposa says will change the world: edible landscaping and rain gardens. “In scarcity, people steal. In abundance, people share,” he says.  “We’ve monetized food. We’ve forgotten that food comes from the land. We say there is no land but there is so much land. We just cemented them and made them parking lots.”

Community gardening will reconnect people with nature and with each other. “It will dissolve the problem of hunger, air pollution, and flooding,” Oposa says. “Why is there flooding? Because excess water has nowhere to go. A rain garden is a simple remedy. The generic term for this is ‘rainwater collector’ but I prefer to call it ‘rain garden,’ which is more appealing and excites the imagination.”

Here is a man with a fertile imagination whose facility with words can make something mundane sound almost magical. The title Shooting Stars and Dancing Fish was inspired by a night spent with friends on a beach in Bantayan Island. The preface is a poem written by Oposa that contains the following lines: “In a city ablaze with light/ Making day of a dark night/ A shooting star I do not see/ And the world becomes all/ About me/ The Seas,‘so lovely, dark and deep’/ If we only dare to care and keep/ The fish will feed us all a-plenty/ And will even dance for you and me.”

The 262-page soft-cover book was published by the Ramon Aboitiz Foundation in Cebu. The book launch, which was held at Miriam College in Quezon City, was hosted by Annie Pascual Guerrero, president of the Cravings Group and Zero Waste Philippines, herself a staunch environmentalist. The book is available on Amazon. Proceeds will go towards restoring SEA CAMP (Sea and Earth Advocates of Culture, Arts and Music for the Planet), an experiential learning center for responsible living put up by Oposa on a beachfront property on Bantayan Island in Cebu, which was virtually “erased” by super-typhoon Yolanda in 2013.