Is it right to hail #COP21 as a success? 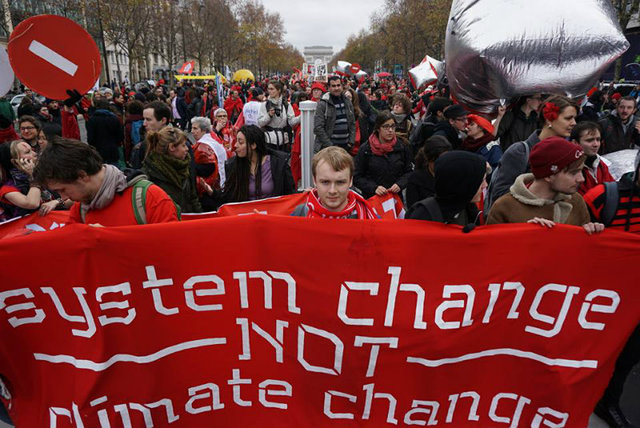 COP21 PROTEST. Hundreds of ‘climate bikers and walkers’ came out in solidarity with the global movement for climate justice early Sunday morning, December 13, in Paris. Photo by Clemente Bautista/Kalikasan PNE

MANILA, Philippines – The climate agreement recently adopted by over 190 countries in Le Bourget, France is a big leap from previous climate talks. But is it right to hail it as a triumph?

This is the question raised by Naderev “Yeb” Saño, former lead climate change negotiator of the Philippines, coming on the heels of the recently concluded UN climate conference in Paris.

On Saturday, December 12, negotiators from all of the world agreed to adopt a global climate pact that aims to keep the world temperature rise to below 2 degrees Celsius, and help curb the disastrous impact of climate of change.

The climate deal was hailed as a "significant stride" for the Philippines, one of the world's most disaster-prone nations.

Nations most vulnerable to climate change, the Philippines included, lobbied hard for wording to specifically limit warming to 1.5°C. However, big polluters, such as China, India and oil producing-giant Saudi Arabia, preferred a ceiling of 2°C, which would have enabled them to burn fossil fuels for a longer time.

For Saño, the statement is no different from a New Year’s resolution – it is not legally binding.

This sentiment was echoed by other Filipino environmental groups like Kalikasan People’s Network and Aksyon Klima.

In a statement, Clemente Bautista, national coordinator of Kalikasan People’s Network, claimed that while the agreement “encourages the development of alternative and clean energy for climate mitigation and adaptation, industrialized countries will continue to dictate its governing framework and regulations.”

Rodne Galicha of Aksyon Klima, on the other hand, also saw "great imbalance" in the deal, citing the absence of a clear finance mechanism for loss and damage.

Loss and damage refers to the inability of a country to adapt to the overwhelming losses from climate change impacts like typhoons, droughts, and storm surges. This concept was introduced by the Philippine delegation, led by Saño, back in the 19th Conference of Parties in 2013.

This provision is important for the Philippine delegation because it provides future climate victims the right to demand for compensation for climate-related disasters that other countries may be accountable for due to their sustained carbon emissions.

In the climate agreement, a statement recognizing “loss and damage" associated with climate-linked disasters was included, with a footnote stating that loss and damage does not involve liability or compensation from more developed nations.

This means that vulnerable countries bearing the brunt of climate-related disasters may be partially covered for their losses, an agreement not deemed as successful by Saño and Galicha.

Successful or not, climate experts and environmental advocates agree: it has been a tough two-week negotiation in Paris, but the fight against climate change is far from over.