In the defense of the environment: Women activists on the front lines 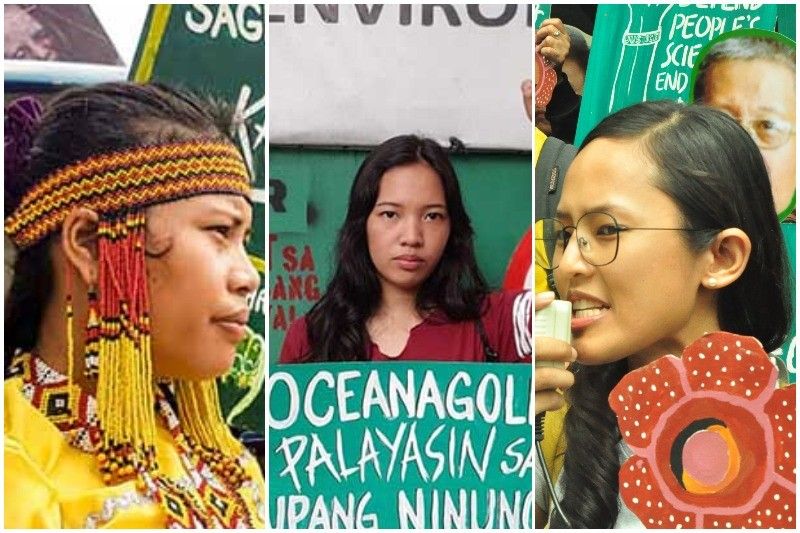 Jinky Malibato has been seeking sanctuary in the United Church of Christ in the Philippines in Davao City for five years, the second home of over 500 internally displaced Lumad people.

She and her family fled their community in Kapalong town in Davao del Norte in early 2015 because of attacks by soldiers and paramilitary groups.

But seeking refuge in a place far from home does not mean Malibato is backing down. The 19-year-old Lumad student is leading her fellow youth in standing up for human rights and defending their ancestral lands from mining and other “development” projects.

She is a member of Sabokahan (Unity of the Lumad Women in Mindanao), which runs the “Save the Pantaron Range” campaign, referring to the mountain range that straddles the provinces of Davao del Norte, Davao del Sur, Bukidnon, Misamis Oriental, Agusan del Norte, and Agusan del Sur.

“The communities in the entire Davao region will be affected once mining companies start extracting minerals in the Pantaron range. It’s important to defend Pantaron range because it serves as the source of our livelihood, food, and medicine. Our land is there,” Malibato said in Filipino.

In it lies one of the last remaining old-growth forests in Mindanao. Pantaron range is also the refuge of the critically endangered Philippine Eagle and vulnerable Philippine brown deer and Philippine flying lemur and is the source of major watersheds in the region.

But the increasingly hostile climate in the Philippines makes Malibato’s advocacy of protecting the environment and her tribe’s ancestral domains harder and more dangerous.

The Philippines was the world’s most dangerous country for environmental and land rights defenders in 2018, according to a report of watchdog Global Witness, which tracks threats against and attacks on rights defenders. Over 100 people were killed for protecting the environment and their communities against industrial agriculture, logging, and mining since 2019.

In 2019, forty-six environmental defenders were killed in the country—a 53-percent increase from the 30 deaths recorded in 2018. Kalikasan People’s Network for the Environment said 70% of the recorded killings last year were driven by agribusiness and other land grabs.

“Why are the people who stand in defense of the environment being killed? They are protecting it not for selfish reasons, but for everyone,” Malibato said. 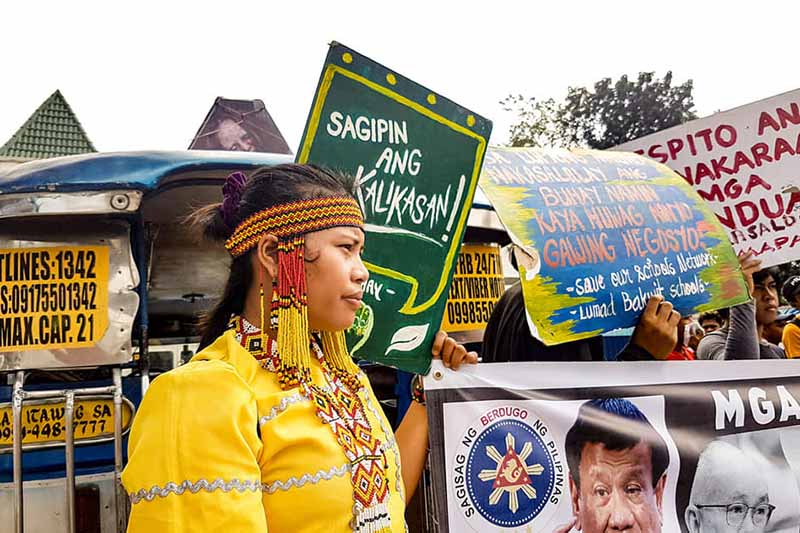 Jinky Malibato. Save Our Schools Network via Kalikasan PNE

On the front lines

Because familial responsibilities often fall on women, they suffer the consequences of losing access to land and natural resources the most.

Because of these responsibilities, women often find themselves at the forefront of asserting their rights and defending their lands from threats.

“I have seen in communities that mothers are almost always the ones leading, educating and pushing other families in their community to fights against projects that will trample their rights,” Gianina Glarino, communications officer of Kalikasan PNE, said. 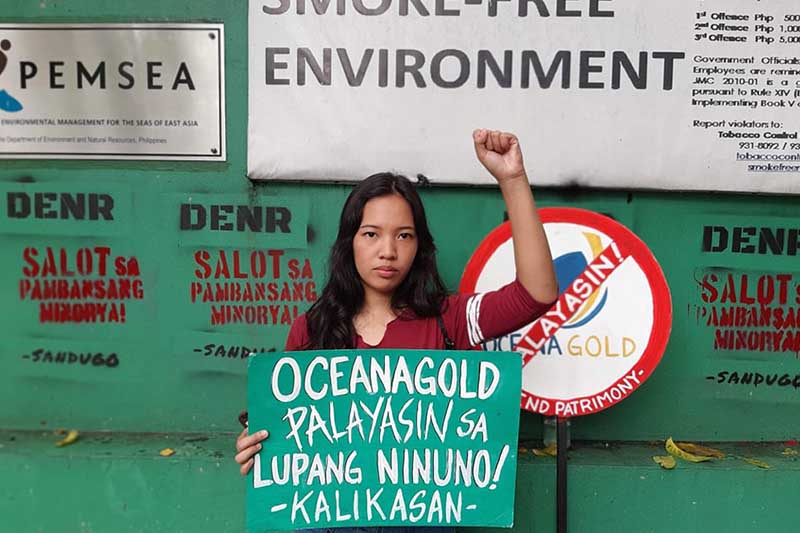 Women environmental defenders play important roles in developing solutions with a gender perspective as well as organizing communities and mobilizing actions on the ground.

“They are more comfortable in sharing their experiences and are inspired when they see that women are leading various initiatives. This helps them see their own potential in becoming community leaders, harnessing their innate maternal instincts in caring for the entire community in the way that they care for their children,” Alonzo said.

She added: “Being a woman also helps in maximizing the characteristics attributed to women such as their need to constantly talk to other people. In communities, they say that they can turn their neighborhood 'tsismis' (gossip) time into productive discussions. This helps in raising awareness in their community.”

Glarino also said that women can be more emphatic toward others and can manage conflicts better. 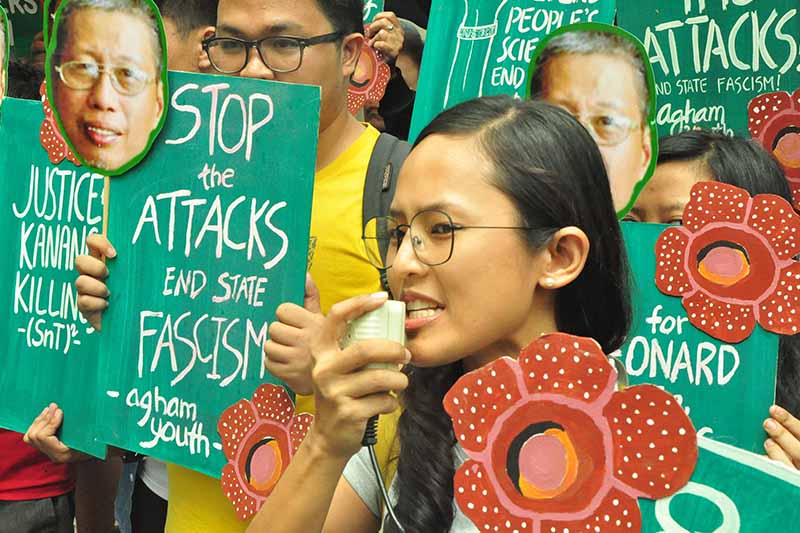 But women environmental activists in the country are exposed to surveillance, threats, and harassment that aim to silence their voice. Sometimes, they also experience gender-based attacks and sexual violence.

While she has not yet experienced gender-based attacks for her environmental advocacy, Alonzo said the current political situation “constantly causes a feeling of being in danger.”

President Rodrigo Duterte has been slammed for his remarks about the rape of an Australian missionary who died in a prison riot—the audience he made the remarks to laughed when he said he should have been first—ordering soldiers to shoot female rebels “in the vagina,” kissing a married overseas Filipina worker and bragging about his attempt to touch his maid when he was younger.

He was also criticized for his comment that he would not appoint a woman as the next ombudsman as well as his tirades against female government officials such as De Lima, Vice President Leni Robredo, former Chief Justice Maria Lourdes Sereno, and former Ombudsman Conchita Carpio-Morales.

It is also difficult for women's environmental defenders to be taken seriously at work.

“In my experience, it is usually harder to be taken seriously when talking to government authorities or representative companies. It usually takes more effort to gain people’s respect and trust compared to my male counterparts, especially as a young woman,” Alonzo said.

“The government is not listening to our voice. They do not give us rights to speak up just because we are women,” Malibato said as she urged the government to recognize the rights and capabilities of women.

But these brave women will not be deterred despite the dangers they face.

The displacement of indigenous peoples from their ancestral lands because of mining operations and dam construction, the effects of reclamation projects to the lives and livelihood of small fisherfolk and coal-fired power plants and the struggle of farmers against industrial plantations push activists like Alonzo and Glarino to keep the environment safe from harm and destruction.

“The narratives of these people and the knowledge I have with me motivate me to continue educating people about their plight and to gather more support for these environmental defenders as they fight for their right to livelihood, right to their ancestral domains and the right for a better environment,” Glarino said.

Alonzo stressed that the environment—which is synonymous to life for some communities—must be protected for the benefit of the majority and not just a few people.

Malibato, for her part, will continue to persevere and stand just like the elder Lumad women who have taken the role of being the voice of their struggle for their ancestral lands, rights, and self-determination.

“Women courageously defend our ancestral domains like Bai Bibiaon [Bigkay], the protector of the Pantaron range,” she said, referring to the leader of the Manobo tribe who led her people in defending their lands.

Malibato added: “As women, we will not back down because we will continue Bai Bibiaon’s fight. We should not be afraid because we can also do what men can.”