How will food production in the Philippines fare under climate change? 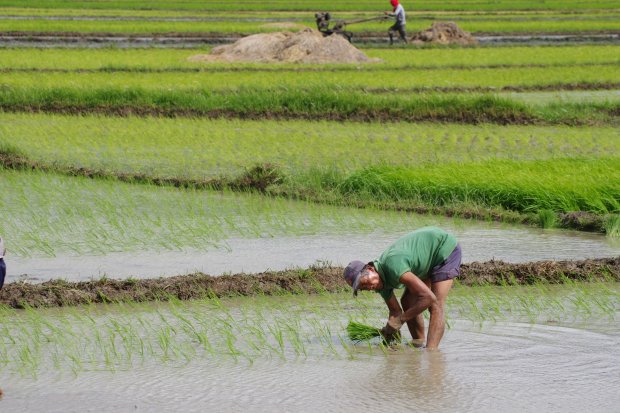 What are the main impacts of climate change on agriculture in the Philippines and how can the island nation best adapt? Photo: I. Norte

The Philippines is one of the countries most exposed and impacted by tropical storms in the world. Just thinking about Typhoon Haiyan that ravaged the country in 2013 - causing widespread devastation and death in its wake - makes that case.

The island nation has so far experienced it fair share of extreme weather events, and there is no question that the island nation is, and will continue to be, a climate hotspot. However, there is still much we do not know about how climate change will affect the country – especially the future of agriculture and food production.

To find out more, a collaborative project entitled ‘Addressing the impacts of climate change in the Philippine agriculture sector’ was launched in 2014. The project is carried out through a partnership between the National Economic and Development Authority (NEDA), the International Food Policy Research Institute (IFPRI), and the CGIAR Research Program on Climate Change, Agriculture and Food Security (CCAFS) policies and institutions work.

The main goal of this project to generate credible climate-related information and data in the country as well as develop tools that can support policymakers, scientists and others to analyze the effects of climate change on agriculture and food production.

Backed by the latest science, the project will publish a comprehensive book entitled, “The Future of Philippine Agriculture: Scenarios, Policies, and Investments under Climate Change” in 2016.

In the lead up to the book launch, the project partners are now organizing a high-level policy forum in the Philippines on 18-19 September to present key findings and recommendations from the book. The event will see the release of two Project Policy Notes, and researchers will present key findings to policymakers to further support them as they make critical decisions under a changing climate.

Forum attendees will include, among others, senior officials from the Philippines’ Office of the Presidential Advisor on Food Security and Agricultural Modernization; Department of Agriculture; Climate Change Commission; Department of Science and Technology; and the Department of Environment and Natural Resources.

Climate change in the Philippines

One of the released Policy Notes, “Agricultural growth and climate resilience in the Philippines: Sub-national impacts of selected investment strategies and policies” (PDF), summarizes insights from modelling temperature and rainfall changes in the Philippines and future scenarios for the agriculture sector. 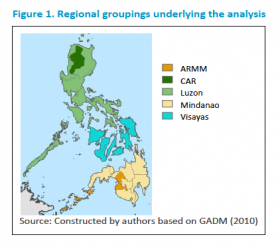 Based on the four global circulation models, it is clear that the Philippines as a whole will receive more rainfall until the year 2050, but with substantial regional differences.

For example, some models indicate a number of regions moving towards distinct dry periods, most pronounced in western Luzon and the Cordillera Administrative Region (CAR).

Rainfall is likely to increase in both the wet and the dry seasons under all four models. Changes in mean daily temperature differed across the models but an increase was indicated.

In the light of this, the authors analyzed climate impacts on crop production and yields related to certain contextual factors, like whether or not crops are rain-fed or irrigated, trade and prices. 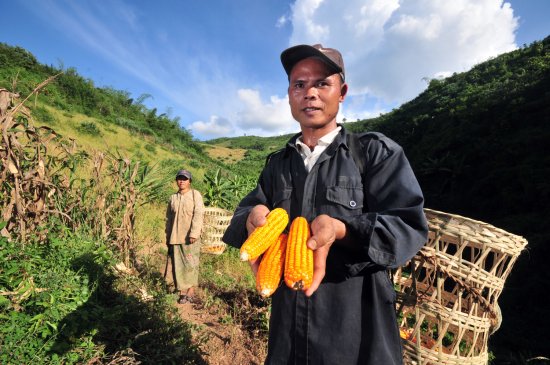 Rain-fed maize in almost all the island regions will be hard hit by climate change, with negative yields as a result. Photo: N. Palmer (CIAT)

Food production in all regions will be negatively impacted by climate change. Maize will be hard hit, as will rain-fed rice and sugarcane fields in some regions. 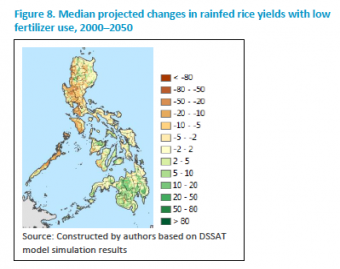 Western Luzon's rain-fed rice production with low fertilizer use will be negatively impacted. Climate change will in some cases decrease yields by more than 20%.

As indicated by the map to the right, there will be substantial differences related to impact across the regions. Irrigated crops will not be near as hard hit as rain-fed.

Livestock will also be decreasing across the country, due to decline in productivity and increased prices.

However, the indirect effect, through prices and trade, adds another dimension to the findings. Higher global prices for agricultural commodities in the future will help support increased incomes and agriculture productivity and yields in some regions the authors conclude.

Higher food and agricultural prices still present challenges though, as the country is a net food importer. Higher prices also present significant challenges for resource-poor populations given that a disproportionate amount of their household budgets are already spent on food.

Adaptation strategies for the Philippines

In summary, all major crops will be somewhat negatively affected by climate change and adaptation strategies are urgently called for.

The Policy Note outlines a number of potential climate adaptive strategies that can help farmers improve their resilience to climate change: