A scientists’ group on Wednesday called on the government to restore and conserve the country’s disappearing wetlands, which can help combat climate change.

In a statement released on the World Wetlands Day, the Advocates of Science and Technology for the People (AGHAM) said it is imperative that the government prioritizes the conservation of wetlands because such ecosystems provide habitats for aquatic organisms.

Wetland habitats such as mangroves, coral reefs and peatlands play a vital role in mitigating the impacts of the climate crisis through sequestering planet-warming carbon dioxide. Wetlands also act as a natural buffer against storm surge and flood.

“As we face a worsening climate crisis, protecting our remaining wetlands ensures a bright future for generations to come,” AGHAM said.

Although wetlands represent a solution to climate change, they are one of the planet’s most threatened habitats. According to the United Nations Environment Programme, some 85% of wetlands present in the 1700s were lost by 2000 to make way for development, farming and other “productive” uses. 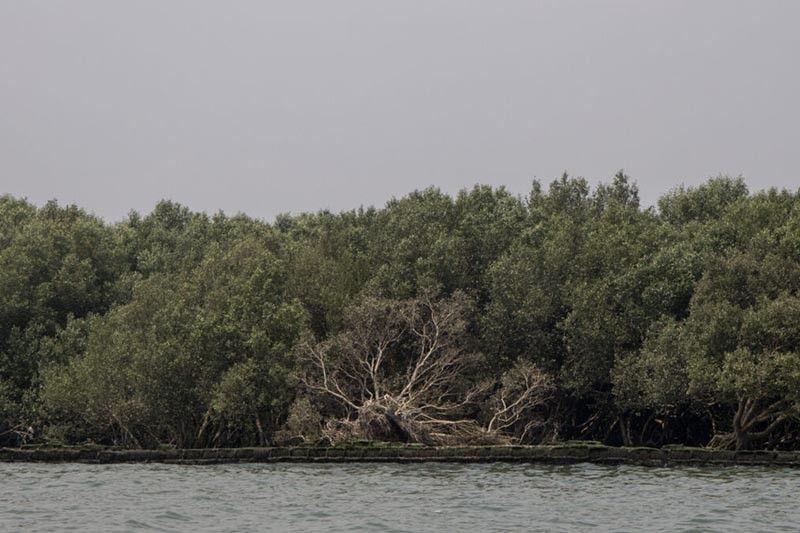 September 2019 photo shows a patch of mangroves in the village of Taliptip in Bulacan province.

AGHAM condemned reclamation projects and dredging activities that threaten mangrove forests and mudflats along the coasts of Manila Bay, including the New Manila International Airport.

The organization urged the Department of Environment and Natural Resources to scrap the Environmental Compliance Certificates issued for the reclamation projects and probe such undertakings.

“We condemn the DENR for their continued indifference to threats against Philippine wetlands, and remind all agencies mandated to rehabilitate Manila Bay that their primary goal should be to revive ecosystems in Manila Bay and not allow any form of destruction brought by activities such as reclamation and dredging,” AGHAM said.

“Cleaning up coastal areas, rivers and tributaries are not enough to genuinely rehabilitate Manila Bay if entire wetland ecosystems are destroyed by reclamation,” it added.

In a release, the DENR Secretary Roy Cimatu said that wetlands are considered among the country’s natural assets.

“Thus we have made them part of our ongoing rehabilitation of Boracay Island. We believe that showcasing their importance through wetlands recovery and restoration in the island is an effective means of spreading awareness to the public,” Cimatu said.

He added that restoring Boracay’s wetlands does not only conserve their ecological functions, but also adds up to the diversification of the island’s tourism sites.

DENR-Biodiversity Management Bureau officer-in-charge Natividad Bernandino stressed the need for “financial, human and political capital” to save wetlands from disappearing.”

The Philippines currently has eight sites designated as Wetlands of International Importance under the Ramsar Convention, with a surface area of 247,684 hectares.