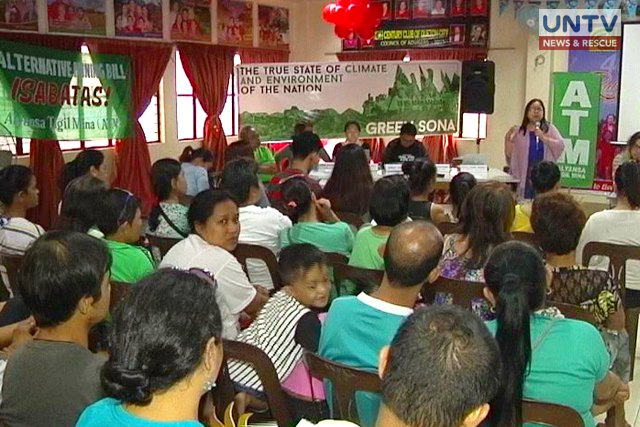 MANILA,Philippines — Some environmental groups will join the big rally to be staged alongside the State of the Nation Address of President Rodrigo Duterte on Monday.

These include Green Thumb Coalition, Power for People, Forest Resources Bill among others.

They claim the president failed to fulfill his promise to protect the environment and natural resources of the country.

“We want to tell him the pending issues and our calls to enact good environmental laws and the need for stricter and better administration in DENR,” Green Thumb Coalition convenor, Jaybee Garganera said.

The president only got 11 out of 60 points based on the groups’ scorecard on the president’s performance when it comes to environment.

They said Filipinos continue to suffer from several environmental and climate change crises one year after the President’s SONA.

The environmental groups are also dismayed over the Environmental and Natural Resources Secretary Gina Lopez’s removal from post.

“People demand change. Those we have won for the environment have to be continued. We remind Sec. Roy Cimatu to check on his mandates and obligations as DENR secretary,” Garganera said.

The groups hope that the president would respond to their urgent demand to adopt and implement a green agenda for the recovery of the country’s degrading ecosystems.