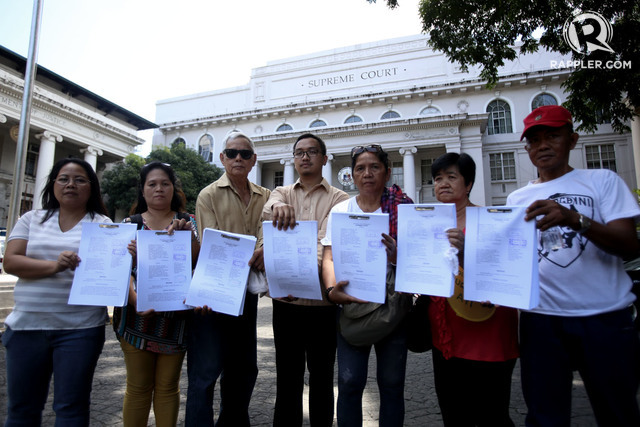 FOR THE ENVIRONMENT. Several individuals and environmental groups bring their anti-coal struggle to the Supreme Court. All photos by Inoue Jaena/Rappler

This is the "first ever case on coal" in the Supreme Court against the two government agencies, according to the Philippine Movement for Climate Justice (PMCJ), one of the petitioners in the case.

The PMCJ, together with other individuals and groups, filed a 65-page petition for continuing mandamus, with application for a temporary environmental protection order.

The other petitioners in the case are the following:

In their prefatory statement, the petitioners – as represented by their legal counsel Jose Manuel Diokno – noted that the DOE is mandated under Republic Act 9513 or the Renewable Energy Act to "reduce the country's dependence on fossil fuels."

Meanwhile, the petitioners said the DENR is mandated under Republic Act 8749 or the Clean Air Act to "strictly regulate the operations of coal-fired power plants because of the hazard they pose to the environment and our health."

The petitioners then noted that both government agencies have "allowed coal plants to proliferate, making the country more, instead of less, dependent on fossil fuels." 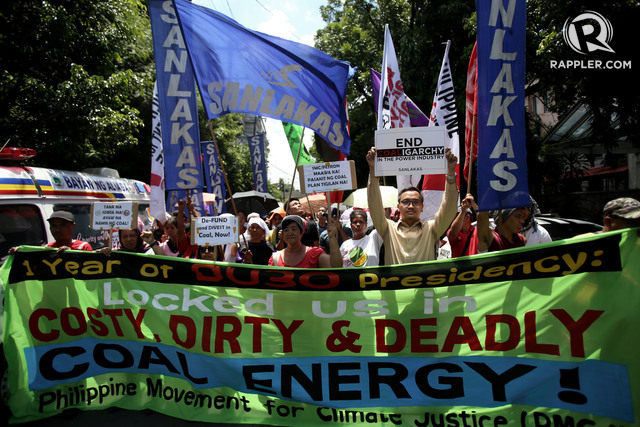 They also believe that the DOE neglected its duty to formulate a Renewable Portfolio Standards Rules and to establish the Green Energy Options Program, while the DENR neglected its duty to do the following: Revise emission standards Designate attainment and non-attainment areas Prescribe effluent standards Administratively prosecute coal plants operating without the Continuous Emission Monitoring Systems and the Continuous Emission Opacity Systems "As a direct result of the failure of DENR and DOE to do their duties specifically enjoined by law and their respective offices, the country has had to rely on dirty energy generated by coal plants that have been operating without proper standards, without accountability, and without regard to their adverse impact on the environment and the people's health," the groups' prefatory statement read. The groups believe the Philippines will be "locked in to costly and harmful coal contracts for generations to come," unless the SC intervenes. They also noted that the Philippines, as one of the countries that ratified the landmark 2015 Paris Agreement, has pledged to cut by 70% its carbon emissions by 2030. Thus, through the petition, the groups hope to compel both the DOE and the DENR to "perform acts that the laws specifically enjoin as duties resulting from their office, there being no other plain, speedy and adequate remedy in the ordinary course of law." For the petitioners, until the agencies fulfill their duties as mandated by law, a temporary environmental protection order must be issued to stop the DENR from processing environmental compliance certificate applications for coal-fired power plants, and from issuing coal plants with authority to construct and permit to operate. They also want the SC to stop the DOE from issuing a certificate of endorsement to coal plants, and service contracts with coal plant proponents. "We are finally filing a case to seek the intervention of the Supreme Court against an act of total disregard on the laws of the land by our own government agencies that resulted to continuously increasing number of environmental and societal damages," PMCJ National Coordinator Ian Rivera said in a statement Friday. According to the PMCJ, this case includes members of the community in Limay, Bataan, as petitioners. Bataan, the group said, is known as one of the hotspots of coal plants in the Philippines. "From previous reports, environmental, health, and social impacts of coal have been recorded in the said area of the province," the PMCJ added. The respondents in the case are Energy Secretary Alfonso Cusi and Environment Secretary Roy Cimatu.