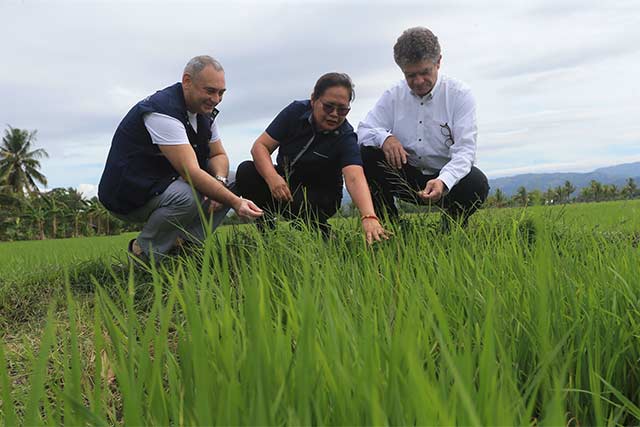 As early as January 2019, farming communities in the municipalities of Pigkawayan in North Cotabato and Datu Saudi Ampatuan in Maguindanao, both located on the southern island of Mindanao in the Philippines, have started early action planning to prepare for dry conditions brought on by El Niño. This El Niño has been affecting the country since March, and its effects will likely last through August 2019.

The Food and Agriculture Organization of the United Nations (FAO), with support from the Government of the Kingdom of Belgium, has been implementing an Early Warning Early Action (EWEA) project to protect the livelihoods of rice farmers in selected vulnerable areas in Mindanao against the potential for extremely dry conditions. Through this project, FAO conducted planning workshops and activities with farmers, including women, in Pigkawayan and Datu Saudi Ampatuan, which are among the areas most vulnerable to the impacts of El Niño.

El Niño conditions started developing in the last quarter of 2018, and by February 2019 the Philippine Atmospheric, Geophysical and Astronomical Services Administration (PAGASA) upgraded the status from “El Niño Watch” to “El Niño”.  This indicated that a weak El Niño was present and that drought and dry spells would likely persist through August 2019. The National Disaster Risk Reduction and Management Council’s latest report from May 2019 indicate that a total of 393 455 people have already been affected, mostly in Mindanao. Reports of damage to agriculture have amounted to more than USD 153.3 million (PHP 7.96 billion), affecting 247 610 farmers. In addition, a total of 43 local government units have declared States of Calamity due to the dry spell.

When affected by El Niño, the Philippines alternates climatically between intense droughts and typhoons. As the climate changes, the El Niño Southern Oscillation increases in frequency and severity, and in turn, increases the intensity of natural disasters. “Such changes are testing the resilience of traditional methods of the country and being able to protect the population, especially their livelihoods, from these shocks is becoming increasingly challenging,” FAO Representative in the Philippines Jose Luis Fernandez said. “Disasters and climate change impacts, including shifts in weather patterns and extreme weather-related events, disrupt economic activities and livelihoods and ultimately threaten food security. Increasing the resilience of agricultural communities to these threats and crises is one of the priority areas of work for FAO in the Philippines.”

The EWEA project aims to safeguard the livelihoods of rice farmers by providing them with irrigation systems and climate-resilient farm inputs. The project also supports rice farmers by promoting the diversification of their livelihoods, encouraging livestock farming and farming of high-value commercial crops to prevent asset depletion and increase resilience. The project has so far provided 1 500 farmers, including women, with drought-resistant rice and corn seed varieties, garden tools, fertilizer and plastic drums for water storage. Women’s cooperatives have also been trained on enhanced farming systems for vegetable production, basic livestock production for goats and mallard ducks, preparedness planning in relation to drought as well as management and handling. This has helped women gain additional sources of food and income.

According to Badria Alon, President of Datu Saudi Ampatuan Women’s Cooperative, FAO’s EWEA project has helped them a great deal in terms of gaining knowledge and skills from different capacity-building activities related to agriculture, such as the mallard duck and vegetable garden production training. The mallard duck eggs and the vegetables that the woman in the cooperative have produced and are now selling has generated income that has helped the women support their children’s school-related costs. The vegetables have also been used in feeding programs at four elementary schools in Datu Saudi Ampatuan.

This EWEA project builds on the piloting of a drought EWEA system in the Philippines that was established in February 2018 by FAO using triangulation of various early warning indicators. FAO utilizes the EWEA system to generate and disseminate timely information on El Niño as part of its disaster risk reduction and management and climate change adaptation initiatives. This helps ensure that enough lead time is provided to implement early actions on the ground to protect vulnerable farmers against the extreme weather conditions brought by El Niño.