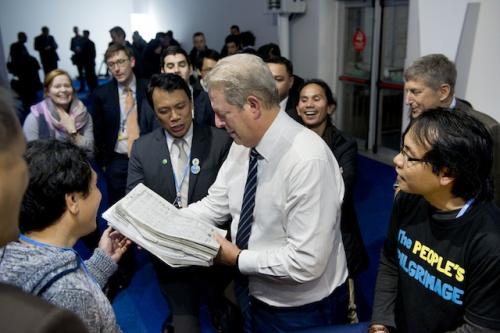 Former US Vice President Al Gore meets Filipino delegates at COP 21. The former VP praised the Philippines' advocacy on behalf of climate-vulnerable countries that contribute little to global warming yet bear the brunt of its impacts. PHOTO BY KASIA STREK/CIRIC

PARIS – In the past two weeks of intense global climate change negotiations, the Philippines showed in many ways the compelling portraits of victims of climate change, and it did convince the world that the fate of billions of people and the environment lies in the historic Paris Agreement approved Saturday night in the French capital.

“Indeed, for the Philippines, climate change means sorrowful catalogues of casualty and fatality; the countless voices of the homeless and the grieving, their very tears and screams carried to us by the winds and waves that blew their homes away,” Climate Change Commission Secretary Emmanuel de Guzman told delegates from the 196 countries that adopted the historic deal in the 21st Conference of Parties (COP21).

”During moments of great violence and bereavement, ‘victim’ is an inadequate word to capture the loss and damage visited upon us,” he said

The Philippines is among those countries suffering from the adverse impacts of climate change that include frequent and extreme weather events like droughts, typhoons and flooding. The country ranked fourth in the latest climate risk report of Germanwatch, in a report that highlighted the devastating impact of Super Typhoon Haiyan (Yolanda) in central Philippines in November 2013 and left more than 6,000 people dead and thousands left homeless. Haiyan has been billed as the strongest cyclone ever to hit land, and showed the world the deadly impact of storm surges, for which few were prepared and which accounted for much of the casualties and damage.

“It is in this light that the Philippines welcomes the adoption of this historic accord,” the Philippines' de Guzman said in his speech at the COP21 plenary.

The Paris Agreement aims to transform the world’s fossil fuel-driven economy within decades and slowing the pace of temperature rise to well below 2 degrees Celsius. The new deal will commence in 2020.

De Guzman said the historic Paris Agreement “may not be as perfect as we want it to be, but it is essentially an acceptable accord.”

He added, “we can build on it and make it better over time. We must now focus on its implementation and on the compliance procedures and will engage in the process.”

The plenary hall erupted in loud applause when French Foreign Minister Laurent Fabius, President of COP21, brought down the gavel on the accord. Delegates hugged one another, and some broke into tears.

“I see no objection in the room. I see the reaction is positive. The Paris climate deal is adopted,” Fabius said.

First, he said, its 1.5 goal has defined the global ambition for climate action.  Paris has given climate-vulnerable countries 1.5 degrees Celsius to “survive and to thrive.”

“We’ve seen how Parties coalesced around this goal.  And we shall deliver on this goal,” he said. The Climate Vulnerability Forum, led by the Philippines, will continue to lead and sustain the fight against climate change for a safe and resilient future for all, he added.

Second, De Guzman said the Agreement also enshrines human rights as its bedrock principle, including the rights of indigenous peoples, women, and migrants, among others. Although the Philippines and other small islands would have preferred stronger language on human rights, in adopting the Paris Agreement, he said “the era of climate justice has come”.

“We are very pleased that for the first time we have enshrined climate justice in an international legally binding agreement,” De Guzman pointed out, adding that the Philippines acknowledged that the agreement ensures ecosystem integrity in climate actions.

Third, according to De Guzman, the agreement ensures support in finance, technology, and capacity building for all adaptation and mitigation efforts.

“While we are already doing a lot on our own to adapt to and mitigate climate change, we are committed to do much more as our national climate action plan shows, and we can do more with the support of our partners.  We would have wanted quantitative targets and more legally binding language and we will continue to work for these as we implement the agreement,” he stated.

Lastly, De Guzman said the Philippines joins other developing countries in “fighting for the inclusion of a Loss and Damage Article in the Agreement”, apart from Adaptation, to secure the permanence of the Warsaw International Mechanism (WIM) on Loss and Damage.

He said it lays the foundation for a WIM Plus: an institutionalized, operationalized Mechanism on Loss and Damage that would ensure the recovery, restoration and resilience of communities, livelihoods and ecosystems adversely affected by slow onset events, extreme weather events and other climate change impacts.

“Solidarity is not a stranger to Paris. When terrorists attacked this city last month, its people did not give in to baser instincts, nor were they defeated by fear. Instead, the people of Paris reached out to each other, her minorities included, and now, they have welcomed us all warmly with open hearts and arms,” De Guzman added.

Up next: the great task

“Now comes the great task of the century: How do we meet this new goal?” Kumi Naidoo, international executive director at Greenpeace, said in a news conference. “Governments need to revise their short-term targets to be in line with their new goals, and revise their energy policies to speed up renewable energy uptake. They must stop funding fossil fuels and end deforestation by 2020.”

According to Rodney Galicha of the Climate Project, the agreement “may become a spark of hope to save the planet signaling the age of a great power shift leaving fossil fuels and embracing renewable energy sources nature has been offering.”

“How would the inclusion of the phrase 'climate justice' apply to thousands of lives lost and worth billions of dollars damaged after extreme weather conditions hit our communities? Be that as it may, historical responsibility, liability and compensation are not addressed, hence, vulnerable countries which experienced massive losses and damages may be on crossroads,” Galicha said.