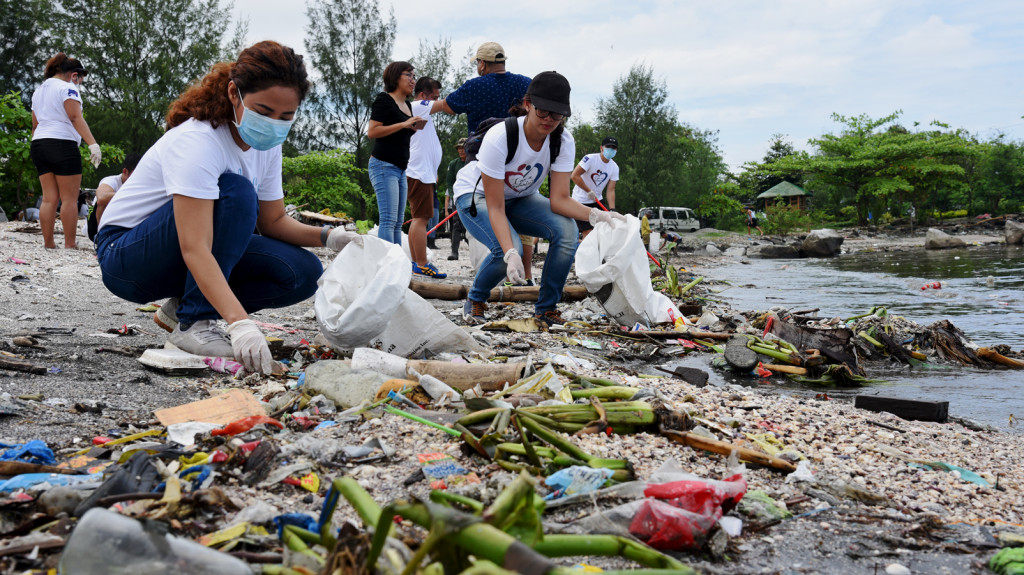 Coastal clean-up along the Manila Bay in Freedom Island. credit:IVAbano

A dead whale filled with plastic trash. Containers of trash shipped back to a foreign country after six years. The problem of plastic waste and the Philippines have different portraitures, including these two, unsheathing concerns on pollution and even tension in foreign relations.

What should be included in this imagery, however, is that of the Philippines linking the reduction of plastic waste into its strategy to mitigate climate change, especially as the country aims to finish its revision of its Nationally Determined Contribution or NDC this year. The NDC contains the targets and climate actions pertaining to mitigation and adaptation.

“The timeline for the NDC is 2019, December 2019,” Ayesha Sharapuddin, Planning Officer of the Climate Change Commission said at the sidelines of the Innovate4Climate forum in Singapore, which was held from June 4-7.

The waste sector contributed 7 percent to the country’s total carbon emissions in 2012, according to the World Resources Institute Climate Analysis Indicators Tool.

Part of that waste is a massive amount of plastic. The Global Alliance for Incinerator Alternatives said in its March 2019 report that “Filipinos use more than 163 million plastic sachet packets, 48 million shopping bags and 45 million thin film bags daily”.

Plastic emits greenhouse gas at each phase of its life cycle – from its refining and manufacture to the end of its useful life, as detailed in the May 2019 report “Plastic & Climate: The Hidden Costs of a Plastic Planet”.

“If plastic production and use grow as currently planned, by 2030, emissions could reach 1.34 gigatons per year—equivalent to the emissions released by more than 295 500-megawatt coal power plants,” the report from the Center of International Environmental Law said.

But even as the Philippines uses a lot of plastic, it does not produce them – a reality which applies to other developing countries such as Thailand and Indonesia.

“Plastic leakage is happening in this part of the world but plastic is produced in the Western world,” Anjali Acharya, senior environmental specialist from the World Bank said.

Experts said this is why a shift into circular economy can be an optimal way in reducing emissions both within countries where plastic is produced and where it is most used.

Circular economy is designed to remove waste from the equation through the reuse of materials.

Just this March, Indonesia’s Ministries of Maritime Affairs and Environment and Forestry teamed up with the Global Plastic Action Partnership to gather data which could be used to substitute materials, decrease overpackaging and increase recycle rates.

“The calculated cost is 5-6 percent of the regular cost. The capacity of the plastic road to be heat and water resistant is also higher,” Lena Ng, Amata Corporation Public Company’s chief investment officer said.

“Why wouldn’t I invest in this project when I can have savings and can contribute to sustainability?” she said, adding that it’s the sensible way to go. “Smart people live in smart cities”.

Each country now has to recycle its own waste

It’s going to take a mix of incentives and a strong enforcement of regulations to really make the shift happen, however.

Bradley Busetto director of the Global Centre for Technology, Innovation and Sustainable Development at UNDP said that for the Philippines, the key is to extend incentives to companies so they can make the products made from circular economy more accessible to the public.

“Philippines should incentivize companies rather than tax people, rather than punishing them for consuming”, he said.

“For the time being, the government should definitely raise awareness but at the same time there are many companies already aware of this movement so do the non-fiscal incentive, like a reward, to recognize their effort,” Koji Fukuda, chief advisor of the Japan International Cooperation Agency, said.

Koji said that even as developing countries pursue circular economy, developed countries must also do so in an aggressive pace in light of stronger calls to ban the import of waste. China has already prohibited the import of some 24 types of waste in January 2018 as part of its efforts reduce pollution.

“Developed countries must find a way to reduce waste within their own territory”, he said.

“No doubt, there has been a major overhaul on the recycling industry after the import ban in China,” Raul Amerigo Torralba, Asia Pacific regional director of Contenur SL said.

It’s a move which complements the amendment of the Basel Convention in May 2019, as governments made global trade in plastic waste more transparent.

“No country will now be able export waste that is not properly labeled. It should have come earlier,” he added.

Torralba is not optimistic though that developed countries can do it easily – EU, for one, has set a target of recycling at least 50 percent of municipal waste by 2020, but he believes a significant number of member-countries will be not be able to meet it.

“Recycling should be profitable, but it’s not easy”.