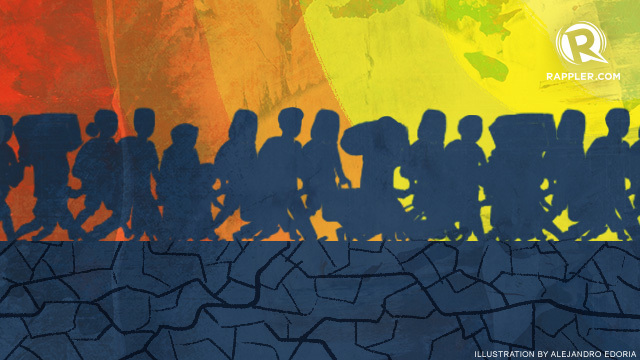 A deluge of climate refugees will be yet a new challenge, if world leaders fail to forge an ambitious, robust, and binding global climate deal in Paris this December.

This was how European Commission President Jean-Claude Juncker set the mood during his first annual State of the Union speech. He emphasized that climate change is “one of the root causes” of the ongoing refugee crisis springing from Syria.

Juncker’s statements linking climate change to Syria may have been inspired by a report from the Proceedings of the National Academy of Sciences, which argued “that drought, in addition to its mismanagement by the Assad regime, contributed to the displacement of two million in Syria.” The report links a long drying trend in the region caused by human interference with the climate. This contributed to social unrest which, in turn, precipitated the civil war.

The Philippines itself is no stranger to long periods of drought. Earlier this year, the Philippine Atmospheric, Geophysical, and Astronomical Services Administration (PAGASA) warned that the country is likely to face up to 6 straight months of drought from July to December. PAGASA also noted that there can be more than 60% rainfall reduction in some areas.

According to the weather agency, latest data show that the El Niño phenomenon could intensify this year and persist until early 2016.

Unless the UN climate talks agree to make sharper short-term goals, we may risk soaring over the 2-degree mark.

Analysts from Climate Analytics at 15 different national plans to cut emissions by 2030. These included the US, the EU and China, which together account for 51% of global emissions. What they found is that a recent trend for countries to submit emissions reductions targets for 2030 could inadvertently lead us down a dangerous path.

“It is clear that if the Paris meeting locks in present climate commitments for 2030, holding warming below 2 degrees could essentially become infeasible, and 1.5°C beyond reach,” said Bill Hare of Climate Analytics. They argue that the UN urgently needs to step in and enforce a 2025 target that would allow countries to revise their emissions reductions plans.

Professor Kornelis Blok of Ecofys noted that “with current policies being insufficient to limit emissions…by 2025, it is clear that ramping up greater policy action needs to be encouraged as part of the Paris Agreement”.

There needs to be a concerted effort at the UN talks in December to ensure that the current levels of emissions reductions are not locked in until 2030, opening up a window for increased action in 2025.

PH gov’t should be serious, sincere

No less than the Department of Energy (DOE) invited companies wanting to get involved in the Philippine coal sector “in a major way” to consider putting up coal-fired mine-mouth power plants in the country's major undeveloped coal areas. This will be done through joint ventures with existing holders of coal operating contracts.

According to DOE’s official website, “the Philippines has a vast potential for coal resources just awaiting full exploration and development to contribute to the attainment of the country's energy self- sufficiency program.”

It further said that “recent upswing development in the coal industry encouraged increased interest in coal exploration. To date, there are 36 coal operating contracts, 16 of which are under exploration stage to verify potentials of the coal fields, and 43 small-scale coal mining operators.”

In fact, under the current Coal Operating Contract (COC) system, coal power plant operators are even given incentives such as exemption from all taxes except income tax, exemption from payment of tariff duties and compensating tax on importation of machinery required for the coal operations, allowing entry of alien technical personnel, right of ingress to and egress from the COC area, and recovery of operating expenses.

Despite the efforts of Filipino environmental champions – Senator Loren Legarda, chair of Senate Committee on Climate Change, and Naderev Yeb Saño, the Filipino diplomat who became the face of UN climate talks in Poland last year – the Philippines continues to make a bizarre spectacle of itself when it says it wants a strong global climate deal but continues to allow the proliferation of new coal-powered plants.

Disruption in climate patterns poses threats to the economy, public health, and even national security.

Being one of the most vulnerable to the impacts of climate change, it is puzzling how the Philippines can champion a strong global climate deal and at the same time continue to fuel its economy through burning coal.

Our government should be more serious in achieving its goals of reducing dangerous greenhouse gases by promoting renewable energy and by eventually decarbonizing the economy.

If we continue to allow the operation of coal power plants in the country, then we can expect even drier and longer droughts in the next few years – and ultimately a wave of refugee crises in the future.

The millions of refugees displaced in Syria should be enough a lesson to shock the Philippines into climate action. –Rappler.com