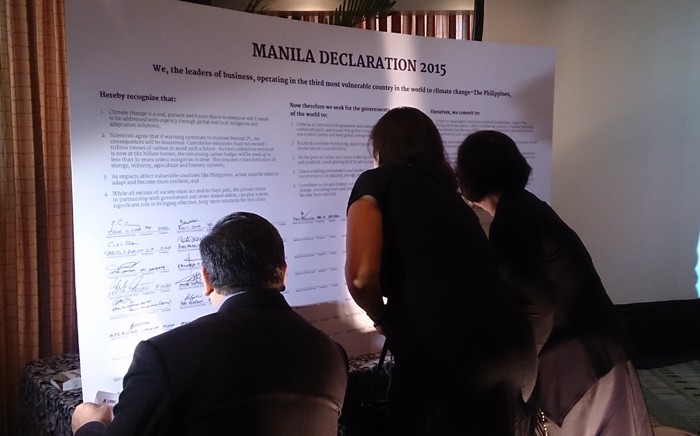 In Photo: Some of the country’s business leaders are signing the Manila Declaration 2015 for sustainable strategies on climate change in Makati City. Image Credits: Marianne Grace Sarmiento

CLIMATE change’s impacts greatly affect the country’s economic development, particularly in agriculture, fisheries and water resources. As water becomes scarce, the business community, which is a heavy user of water, is called on to implement solutions for a sustainable future.

Thus, taking an active role toward a climate-resilient nation, top business leaders gathered recently for the first time at a hotel in Makati City for the “Philippine Business’ Response to Climate Change and El Niño: Manila Declaration Signing and Water Alliance Launch.”

Recognizing that the Philippines is one of the top countries that are vulnerable to climate change, the Manila Declaration 2015 is a commitment by companies to support the Intended Nationally Determined Contributions; develop and implement mitigation strategy as part of their core business; recognize climate risks and provide solutions for a more carbon-efficient operations; increase resilience against climate-change consequences; and embed sustainability in business. Business leaders made a ceremonial signing of the Manila Declaration led by Edgar O. Chua, chairman of Philippine Business for Environment and CEO of Pilipinas Shell Petroleum Corp.

The Water Alliance, on the other hand, is a partnership among CEOs that addresses issues to provide solutions to the effects of climate change, particularly the El Niño, on the country’s water resources. It aims to develop a road map with targets and metrics, monitor progress and evaluate its progress.

“We hope to be the voice of the industry in advocating for necessary policies which will address the challenges in water the country is facing,” said Chua, who is also a member of the Philippine Business for Social Progress that acts as the Water Alliance secretariat and is implementing projects on water security, watershed rehabilitation, and disaster risk reduction and management.

The Water Alliance was formed after the success of the “CEO Water Mandate” where it took its inspiration from. It is a partnership formed in 2007 between the business community and the United Nations with focus on developing strategies and solutions to contribute positively on emerging global water crisis.

The Manila Declaration signing and the Water Alliance launch were in preparation for the upcoming United Nations Framework Convention on Climate Change, which will be held in December in Paris, France. At the conference, the international community will conclude an agreement based on common but differentiated responsibilities that would limit global warming to 2 degrees Celsius or below.