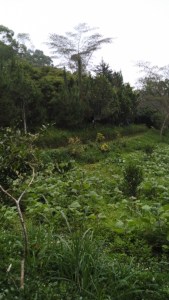 One of the many agroforest plots of Henry Binahon of Lantapan, Bukidnon province in southern Philippines. Photo: World Agroforestry Centre/Amy CruzDespite impressive economic growth in Asia and the Pacific, the region still has to address the food insecurity of over half a billion of its people. Climate-smart agriculture (CSA), including agroforestry and other diversified farming practices, has huge potential to improve food security and address climate change at the same time. At a Forum, organized by the Asian Development Bank in June 2016 in the Philippines, researchers, policymakers and farmers discussed what should be done to expand such practices and bring greater benefits to more people. Amy Cruz, Communication officer with the World Agroforestry Centre, followed the discussions.

Environmental degradation is only one of the issues the Asia-Pacific region is facing that has a direct impact on ensuring a sustainable food supply. The growing populations and economies demand that agricultural production keeps up. Farmers thus turn to new methods, which often can result in greater yields but can also lead to greater degradation and depletion of natural resources.

At the Forum Food Security Forum: Safe, Nutritious, and Affordable Food for All in Manila, Mahfuz Ahmed, technical advisor for rural development and food security with the Asian Development Bank pinpointed large-scale migration as one of the top threats to food security. Rural–urban migration reduces the number of people working in agriculture. Another top threat is extreme weather, a corollary of climate change, which further compounds these threats and results in often huge losses in production.

More communities, organizations and governments are recognizing the potential of climate-smart agriculture in addressing both food security and climate change. CSA was highlighted during the Food Security Forum as one of the most innovative technologies for tackling resource constraints and climate change.

According to the Food and Agriculture Organization of the United Nations, ‘CSA aims to tackle three main objectives: sustainably increasing agricultural productivity and incomes; adapting and building resilience to climate change; and reducing and/or removing greenhouse-gas emissions.’ As an approach, CSA is locally specific: what might be considered a CSA practice in one community might be different in another.

Agroforestry and diversified farming are examples of CSA practices that communities can adopt and adapt to their own conditions. Much of the research on agroforestry is supported by the CGIAR Program on Forests, Trees and Agroforestry.

Integrating trees on farms provides additional sources of income for farmers, ensuring they can still have income and food from tree products even if their other crops fail. In addition, when the right tree species are planted they can provide shelter for annual crops, improve the micro-climates of farms and even increase production or yields of other crops. Agroforestry in Vietnam has proved to help farmers recover more quickly from natural disasters.

A case of diversified farming was presented during the Forum. JonJon Sarmiento, known online as Farmer Jon, is the sustainable agriculture program manager of the Pambansang Kilusan ng mga Samahang Magsasaka (PAKISAMA), a national farmers’ federation in the Philippines. Farmer Jon is advocating what he calls, ‘integrated, diversified, organic farming systems’. These systems help farming communities withstand the impacts of climate change, including more intense typhoons. 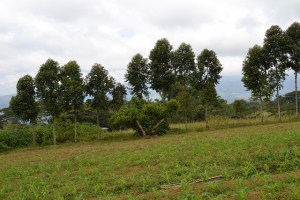 Trees as windbreaks on a farm in Lantapan, Philippines. World Agroforestry Centre/Andy Ortega

Diversified farming gives farmers diversified sources of income, helping them become less reliant on only one crop for their food and livelihoods. Rice farms do not only produce rice but also have fruit trees on the side, cash crops, fisheries and livestock.

Integrated farming, on the other hand, would maximize crop and livestock interactions to improve agricultural production. According to Farmer Jon, “Ideally, integrated systems should be able to stand on their own. One plus one equals four, five, six, seven… Nutrient recycling is the main strategy.”

An example from his farm is how he can make organic fertilizers for his rice crops from the waste of his pigs and bananas. Then the rice straw from his fields is used to feed livestock. A virtuous cycle of virtually no waste.

Farmer Jon argues that farmers employing such strategies help feed their families sustainably with their diverse produce. “I say we can combat hunger and poverty within three to six months after calamities with integrated, diversified, organic farming systems.”

Inspirational and practical farmers like Jon represent a future in which food is not only plentiful and can feed all the hungry mouths but is also nutritious and providing solid, regular incomes to the people who produce it.

Read more about the Forum, CSA and Farmer Jon’s ‘learning farm’ in part 2 of the blog.