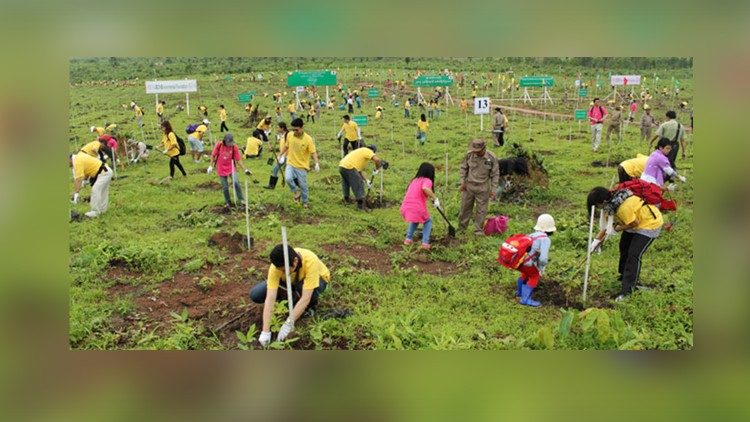 A tree-planting event in Yangon, Myanmar.

Cardinal Charles Bo, the Archbishop of Yangon, joined Catholic social workers and young people on July 6 to plant trees in a government-reserved forest area on the outskirts of Myanmar’s commercial city.

More than 200 Catholic Church workers and young people joined in a tree-planting event last week in Myanmar, in a show of responsibility for protecting the environment in the spirit of the Pope Francis Encyclical, “Laudato Sii”.

Cardinal Charles Bo, the Archbishop of Yangon joined Catholic social workers and young people on July 6 to plant trees in a government-reserved forest area on the outskirts of Myanmar’s commercial city.

Karuna or Caritas Myanmar, the Catholic Church’s social arm, has been actively involved in a tree-planting campaign since June 18, which marked the fourth anniversary of Pope Francis's encyclical on the “Care for Our Common Home”.

Among other issues, the encyclical calls for responsible and swift action on climate change.

Since 2018, the entire Caritas Myanmar network has been working to organize the campaign in its 16 dioceses across the country.

Its aim is to motivate different stakeholders to shoulder the responsibility to eliminate environmental destruction and injustices connected to global climate change.

Commenting on Saturday’s event, Father Joseph Mg Win, director of Yangon’s Karuna mission said that the government had provided the saplings and reserved an area to plant the trees and the Church would take responsibility for caring for them for the next two years.

Father Mg said his Karuna Yangon has been planting trees since 2017 and had also planted thousands of nursery plants at several villages in Bago Division.

Theresa Kay Zin Phyo, human relations officer from Caritas Myanmar's national office in Yangon, said the campaign had been launched as a collective effort of Karuna offices across the country to raise environmental awareness.

“Nowadays, environmental degradation is a huge problem and we have a duty to protect the environment and love trees and forests. That’s the message we want to convey to future generations,” Kay Zin Phyo told ucanews.com.

She added that some offices had already begun planting trees and others would start doing so in the coming weeks.

Caritas Myanmar has submitted its five-year (2018-22) tree-planting program to government officials in Naypyitaw and the Forestry Department has provided thousands of nursery plants.

Eddie, program manager of Caritas Lashio in northern Shan State, said they planned to plant 1,800 trees on church-owned land in the second week of July in collaboration with some parishes.

Cardinal Bo, who has been outspoken about environmental degradation in the country, delivered a short video message to usher in the 2019 national tree-planting campaign.

In the six-minute video, delivered in both English and Burmese, the cardinal said he was extremely glad the government of Myanmar and its people were launching the mass tree-planting campaign.

He lamented that greed has stripped naked Myanmar of 30 percent of its forests in recent decades, making it one of the planet’s most vulnerable countries for natural disasters such as cyclones, floods, and landslides.

Citing the Bible, the Archbishop of Yangon noted that God has appointed man and woman to be stewards of  His creation but unscrupulous people have wounded the Mother Earth.  Noting that “millions of our people depend on the protection of nature,” he warned, “Those who destroy forests  steal from the poor and future generation.”

The 70-year-old cardinal has been vocal against the China-backed Myitsone Dam project on the Irrawaddy River in the northern Kachin state.  He said the massive $3.8 billion hydroelectric power development project that would mostly benefit China, would be an environmental disaster, depriving millions of farmers of their livelihood in a nation where 80 percent of the population depends on agriculture.

Card. Bo urged every citizen of Myanmar to plant and take care of at least 10 trees in order to truly make the country green again. “Prevent pollution, produce more oxygen and plant more trees,” he said.